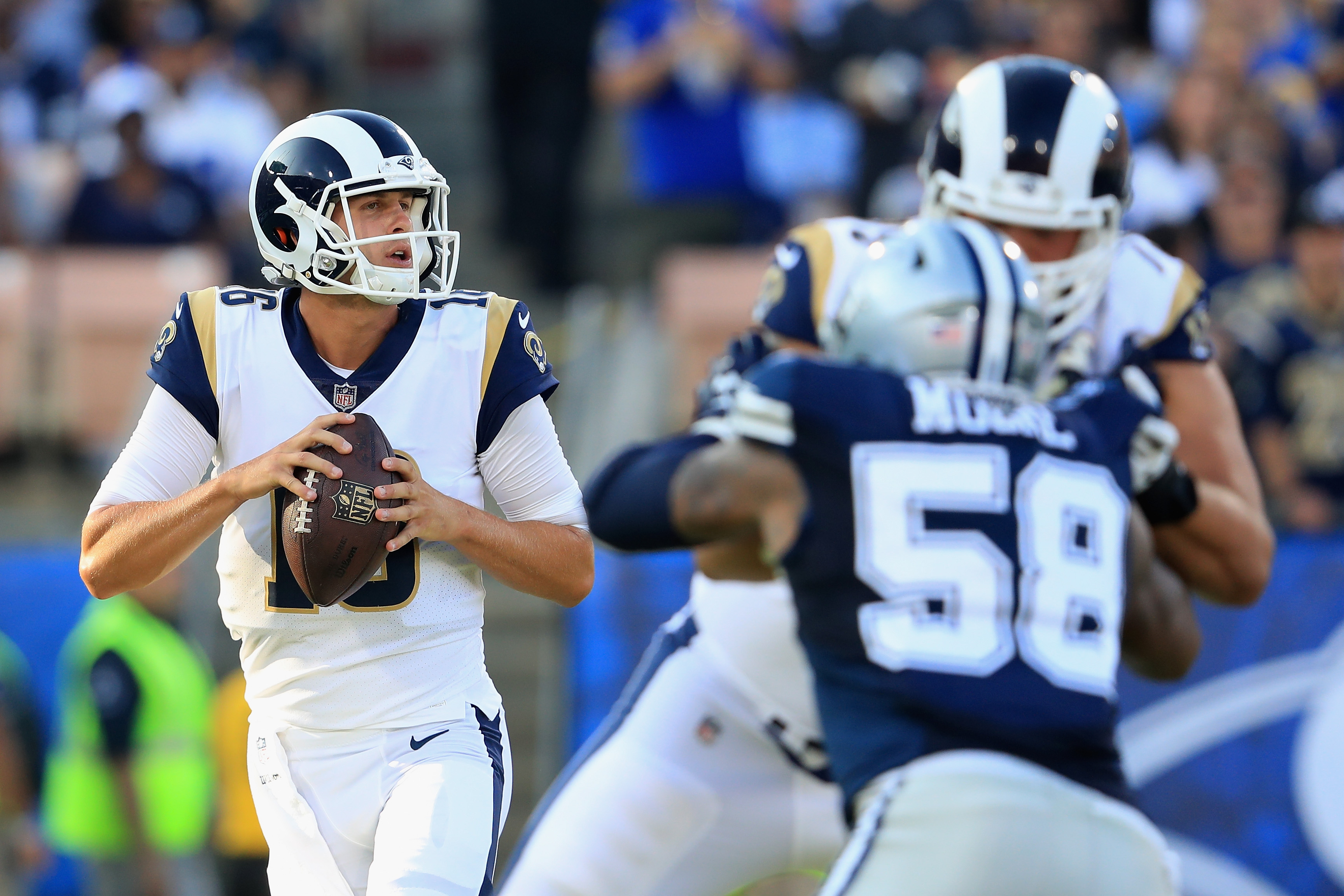 The Rams are heading into week two of the preseason tomorrow where they will face off with the Oakland Raiders. Before anything is played, I felt it would be intriguing to delve into a Madden 18 simulation of the Rams season. The new Madden game comes out next Friday, but since the Xbox one happens to allow EA Access we can play it for a quick 10-hour trial. So here is how the brand new rosters in Madden 18 (Sammy Watkins included) feel about the Rams season.

The Rams started off red hot out of the gate even after losing star LB Alec Ogletree and WR Cooper Kupp. They would end up winning three-straight against the Indianapolis Colts (35-13), Washington Redskins (27-24) and the San Francisco 49ers (31-17). Jared Goff and Sammy Watkins appeared unstoppable to start the season connecting on three straight 100 yard games for Watkins and two touchdowns in each contest. Once the Rams headed to Dallas trouble emerged. Dak Prescott was actually injured in the game that did not include Ezekiel Elliott due to suspension and Prescott while trying to carry the Cowboys fell victim to a knee injury that would end his season. Luckily for the Cowboys and unluckily for the Rams backup QB Luke McCown overcame the impossible odds and dominated through the air for a 28-7 victory over the Rams.

The quarter mark finished with the Rams staring at a 3-1 record (same as last season). Back home they would go to play the Seattle Seahawks in week 5. The Rams would, unfortunately, lose Robert Quinn for the rest of the year with a torn pectoral and Maurice Alexander for an extended time with a fractured foot. The Rams were unable to overcome the injuries in a loss at home versus the rival Seahawks. Goff had an impressive day, but the Seahawks would go on to win 33-21. The Rams would follow up a two game losing streak in Jacksonville to face Blake Bortles and the Jaguars. With an overall average performance of Goff, the Rams would ride the coattails of Todd Gurley to go out in front and finally seal the deal with a Mark Barron interception. The Rams would finish their half of the season going into the bye. In came the Arizona Cardinals to steal a home game from the Rams. It was the Gerald Everett coming out party as he put up two scores and 177 yards receiving. Unfortunately, the injuries of Michael Brockers and Trumaine Johnson begin to pile up in a Rams 17-28 loss. The Rams come off the bye week flat versus the New York Giants on the road. Goff has one of his worst games and Watkins and Everett are held to a combined total of 5 yards in the game. The Giants go on to roll to a 24-6 win with Odell Beckham Jr. and Evan Engram causing all sorts of trouble for an injured secondary.

The third quarter of the season kicks off with another Rams loss after Deshaun Watson out-duels Jared Goff to win the game 37-25 in Alec Ogletree’s return from his injury. It’s week 11 and the Rams head to Minnesota to play Sam Bradford and the Vikings. Samson Ebukam ends up knocking Sam Bradford out of the game with a knee injury and the Rams have their way with Teddy Bridgewater. The Rams pick off Bridgwater four times including three from Kayvon Webster in a dominant road win 38-14. Back to Los Angeles we go for the matchup between Goff and Drew Brees. Gurley goes down early in this one and it’s up to Lance Dunbar and Malcolm Brown to carry the load. Brees and Goff throw five touchdowns each as Tavon Austin explodes for 231 yards and two touchdowns. Ebukam continues to fill in for Quinn nicely as he forces a fumble and takes it back for the game winning touchdown as the Rams win 49-42. The Rams are back over .500 at 6-5 and head to hostile Arizona to gain ground in the NFC West. In a close game, Lance Dunbar has a career day with 125 yards and two touchdowns, Aaron Donald racks up five sacks, but it’s all not enough when Dunbar fumbles on the potential game winning drive 24-27.

The final quarter of the season and the final stretch leaves the Rams needing to win out to win the division. A reeling Seahawks team combined with a bad Cardinals team and 49ers team means the NFC West division title is wide open for the Rams. The Rams head into the Goff vs. Wentz bowl and Wentz picks apart the Rams for a 28-7 victory and a likely elimination of the Rams playoff hopes. The Rams head to Seattle to face what is their last opportunity to stay in the hunt. Goff breaks his collarbone early on and Sean Mannion goes off for 349 yards and two touchdowns to help beat Seattle 26-20. The Rams need to win out to possibly eek into the playoffs, but now they face the 12-2 Tennessee Titans who have serious Super Bowl contention. Mannion gets picked off by rookie CB Adoree Jackson twice and Marcus Mariota totals up to 467 total yards to beat the Rams and end their playoff hopes 35-21. The season finale in Los Angeles the Rams try to break even at 8-8 on the season by winning over the revitalized 49ers. Gurley is back from injury and Mannion plays well, but not well enough as C.J. Beathard and George Kittle are too much to handle in a 28-23 final.

The Rams finished this simulation 7-9 which many may feel is very realistic. Madden may have way more faith in players like Lance Dunbar and Sean Mannion than the majority of fans do, but hey, that’s simulation. Now here are the stats that Madden simulated for the Rams.

What to make of this…

Nothing, it’s not real, it’s just for fun. Clearly, there are some things that are off, but overall it’s interesting. It appears Madden thinks the Rams offense has not only immensely improved with the addition of Sammy Watkins, but it’s also primed to outperform the defense. That I disagree with and I’m sure many will as well. The big theme of this season would be injuries, but after that? Probably the emergence of Jared Goff. Now, the Rams have lost Goff to a broken collarbone in this simulation, but everything aside from that you would sign up for a 3,000-plus yard season from Goff with 21 touchdowns and 13 picks in a heartbeat. Sure, you may have higher expectations, but in 12 games that looks like a good line. Same with Todd Gurley’s 850-plus yards in 10 games. The big thing that kind of stuck out to me and was a little disappointing was the fact that Cooper Kupp suffered a torn achillies in week one. Let’s hope for the love of the god that the Rams stay more injury-free than this simulation appears to think. Overall, it’s not perfect, it’s a simulation, but it gives us a barometer of where Madden may think the Rams fall.

Perhaps it isn’t their year this season, but the Rams moving from a 4-12 disastrous start to the return to Los Angeles era to 7-9 is a solid improvement and would have new Head Coach Sean McVay held in high regard as the Rams enter the 2018 off-season.