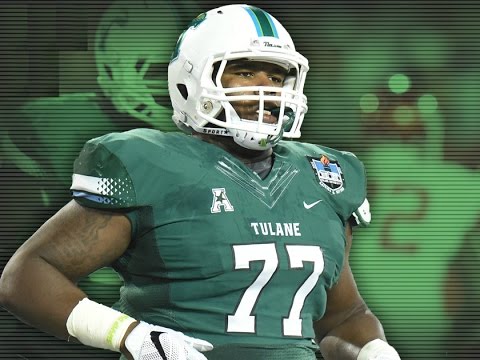 How dare I, compare any many to the likes of Aaron Donald? How dare I, even write an article where I insinuate Aaron Donald won’t finish his career a Ram? Well, I am a realist, and this Donald situation isn’t getting any better. So while we play the waiting game, why don’t we take some initiative and see who the next man up should be?

Based off the latest depth chart a man by the name of Tanzel Smart has already jumped over Louis Pasat. The 6th round rookie out of Tulane is something to be excited about. He plays the game in a very similar style to that of Aaron Donald. You can tell this selection was the Rams attempt at getting a guy with a similar skill set. Standing 6’1’’ and a lean 296 pounds with 32 inch arms he stacks up to Aaron Donald quite favorably.

Smart is a high motor guy with an explosive first step. The name of his game is penetration. He is a pressure artist. Finishing his final year at Tulane he had 68 total tackles, 19.0 of those for a loss, with 5.5 sacks. Not bad for a guy playing the DT position. On every snap he is looking to make a play, whether it’s tossing aside a guard with pure strength or ripping under them to get behind the LOS. Smart is advanced in his hand usage and knows how to disengage from a block. Tanzel is a very fun watch and is a stellar example of the continued transition to smaller quicker defensive tackles.

Do not get me wrong, Tanzel has his weaknesses. They are not pretty either. For a man carrying 300 pounds (and he carries it well I might add) he lacks the strength you might expect out of a man his size. He also has average arm length and some rather tiny hands. His counter moves are limited and his top end speed is just average for the position. With all that being said I keep going back to the tape on him and cannot help but to love what I see. My biggest question with him was will he be able to make the jump from a smaller FBS school to the NFL. So far he has passed that test with flying colors (yes, yes, my foot is still on the brakes, I understand pre-season needs to be taken with a grain of salt) but he graded out at a just below elite level according to PFF in his first taste of NFL action, with a grade of 87.5.

Per PFF “Smart recorded one hit, three hurries, one batted pass at the line of scrimmage and two tackles on his 37 snaps. He finished with a very respectable 11.1 pass-rush productivity mark.” As you can see so far Smart has shown he has all the tools, and without a doubt once he spends some time in an NFL weight room, will be able to address his strength concerns I have about him. With refinement he has the tools to turn into a force in the middle of a Rams defense that is staring straight into the face of a future without Donald.

Tanzel Smart is a guy we should all start getting very excited about, the Rams already like him enough to make him the next man up after Donald. Count me in as someone who is very excited to see what he does in the next three weeks.

Let us know what you think of Tanzel Smart being the Donald replacement in the Facebook comments!