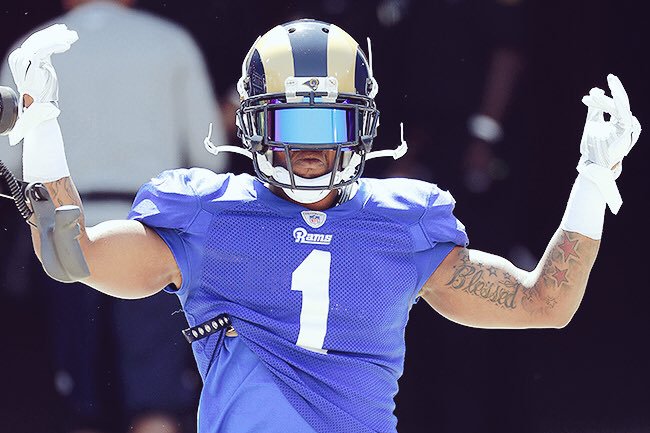 This article is written to address the elephant in the room. He goes by the name of Tavon Austin. I want to preface this article by saying we are only going to look at Tavon as a receiver, not as a gadget player, we will not be including his rushing yards in the argument. With that being said, I have been a detractor of this player (not the man) for quite some time, ever since the Rams drafted a 5’9 receiver at number 8 overall I was bitter about the selection, height is not everything but when selecting a weapon 8th overall you are looking for something a little more, substantial. It only adds insult to injury when guys like Tyler Eifert, Justin Pugh, DeAndre Hopkins, Travis Frederick, and Keenan Allen were still on the board. All of which are currently positions of need for the Rams, who have vastly out performed Austin to this point. For fun, I want to look at receivers who have a cap hit less than Austin’s $16,000,000.00 this year and give you their stats for this past season.

The list goes on, I could spend all day adding big names to this list that would make you cringe. As you look at the names above let us remember Tavon Austin ended his season with 58 receptions, for 509 yards and 3 TDS. He has yet to crack 1,000 yards or double digit touchdowns in a single season. In a time where the Rams are struggling to scrape enough money together to pay Aaron Donald, a man who has actually produced at an elite level, they cannot afford to have a receiver on their roster with a cap hit of roughly $16,000,000.00, especially one that produces the type of numbers that you would expect out of a 3rd or 4th string receiver, yet gets the snaps of a number 1 receiver! It is ludicrous.

I know it is hard to accept but the Rams need to rip the band aid off. They invested heavily into obtaining Watkins, and Robert Woods, two guys that can actually play the position and with some upside. At this point it is quite apparent that Austin is not meant to be a starting player. Even though Austin’s cap number drops to $8,000,000.00 over the final few years of the deal, that is still far too much to be paying a man that can’t get over 500 yards for you through the air. The Rams put themselves in between a rock and a hard place, paying Austin so much money for such average production has made it all but impossible to trade him with his current contract attached to him. They also should not hold onto him and keep getting gashed for big chunks of cap space each year. This opinion will not be popular but the Rams should outright cut him. No, not this year, they already have the space allocated to pay him and the dead money hit would be enormous (were talking $19,000,000.00 enormous) , there is not much benefit there. The Rams should cut him after the 2018 season as a post June 1st designation. The dead money would be $5,000,000.00. Yes, it will put a hole in the Rams wallet for 1 year, but then they will be rid of him and his cap charge and open things up for extensions that need to happen within the next two seasons to keep the core of the team together.

It is not a sexy proposition, but when you make bad decisions, you have to live with them. Ignoring problems does not make them go away, and that is what the Rams would be doing if they chose to keep paying for Tavon Austin’s deal.

This is a new coaching staff, a new city, a new era, and these old mistakes should not haunt the Rams as they transition.

Let us know what you think the Rams should do about Tavon Austin in the Facebook comments!