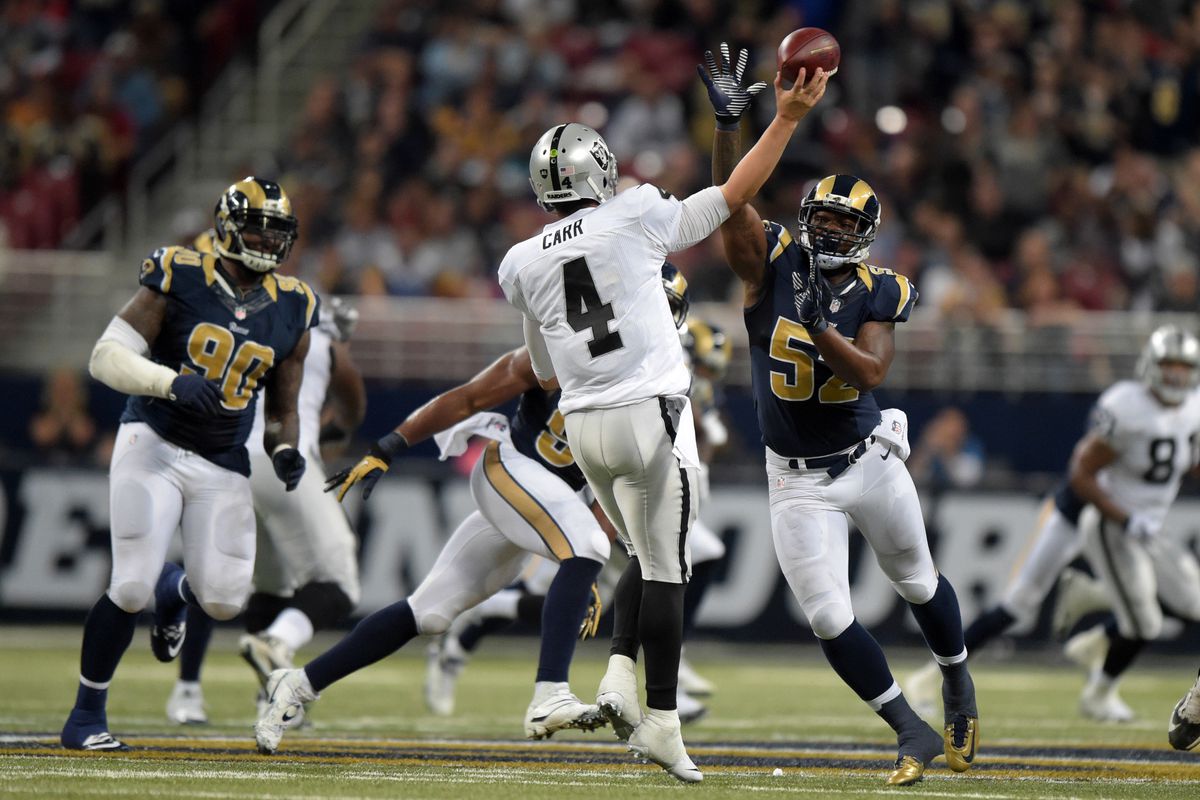 The Los Angeles Rams will be taking the short flight up to the Bay area to face the (still) Oakland Raiders at O.Co Coliseum on Saturday night. Here a few Rams that you should give a long look during week 2 of the 2017 preseason.

The most obvious player to watch for is new WR Sammy Watkins. He will likely play in a very limited role since he’s still learning the playbook, but it will be exciting for all Rams fans to have a receiver with his kind of talent on the field for the first time. Jared Goff may try to force feed Watkins, which will likely mean more deep passes than we have become accustomed to.

Look for Sammy Watkin’s presence to draw defensive backs away from the line of scrimmage, which should help open up the run game. Though Coach McVay has stated that he plans on the starters playing for two quarters, Sammy will likely be on the field for only a few series on Saturday, so savor it while it lasts.

The wide receiver group is finally getting healthy, with the exception of Tavon Austin. Mike Thomas has gotten reps with the first and second team offenses this week, and looks to receive a significant number of snaps this week in Oakland. Thomas had stood out as a deep threat throughout the offseason, drawing rave reviews from the coaches for his improvement from a year ago. He has since received a suspension for the first four games of the 2017 season, and started training camp on the PUP list.

Thomas is now participating fully, and needs to show fans and coaches alike that he can be a dependable target, something he struggled with in his rookie season.

Josh Reynolds has been held out of most of camp with a quad injury until this week. After he was drafted in the fourth round, Reynolds was considered one of the Rams’ best picks because of his height and downfield ability. He still needs to polish his route-running and gain some weight before he can look to be a complete receiver in this league.

Like Thomas and Watkins, look for Reynolds to run some deep routes against Oakland to show off the ability that got him drafted. Though I don’t expect to see Reynolds on the field this season, I think he has a bright future.

With Aaron Donald’s hold out not expected to end anytime soon, look for Tanzel to step up and see some playing time. His name was called often last week, and was graded well by Pro Football Focus after getting consistent pressure up the middle.

Keep an eye on Tanzel to do more of the same this week. He could end up being a key rotational defensive lineman this season, especially if Aaron Donald continues his holdout.

RT Jamon Brown needs to get on track

The starting offensive line looked solid last week, with one glaring exception. Jamon Brown looked rough in run blocking, getting split by a rookie defensive tackle on the first play of the game, which resulted in a 3-yard loss. Like McVay said after the game, success in the running game takes all eleven men, and if Jamon can’t do his job, Todd Gurley won’t get very far. In Jamon’s defense, he had spent all offseason and all but a week of training camp playing right tackle, and was moved to right guard ahead of last week’s matchup.

This week, Jamon will face a stiff test in Oakland’s front seven, who are among the better groups in the league, especially with the presence of Khalil Mack. Right now he is seen as the weak link on an improved offensive line, and will need to prove himself this week, and in weeks to come that he can open holes and protect Jared Goff from interior rushers.

This week should give us a more extensive look at the starting offensive line, and the starting offense should get more opportunities to get in a rhythm. The defense will also face a tougher opponent with the loaded Raiders offense, so be sure to look for the game at 7:00 PM PST this Saturday.