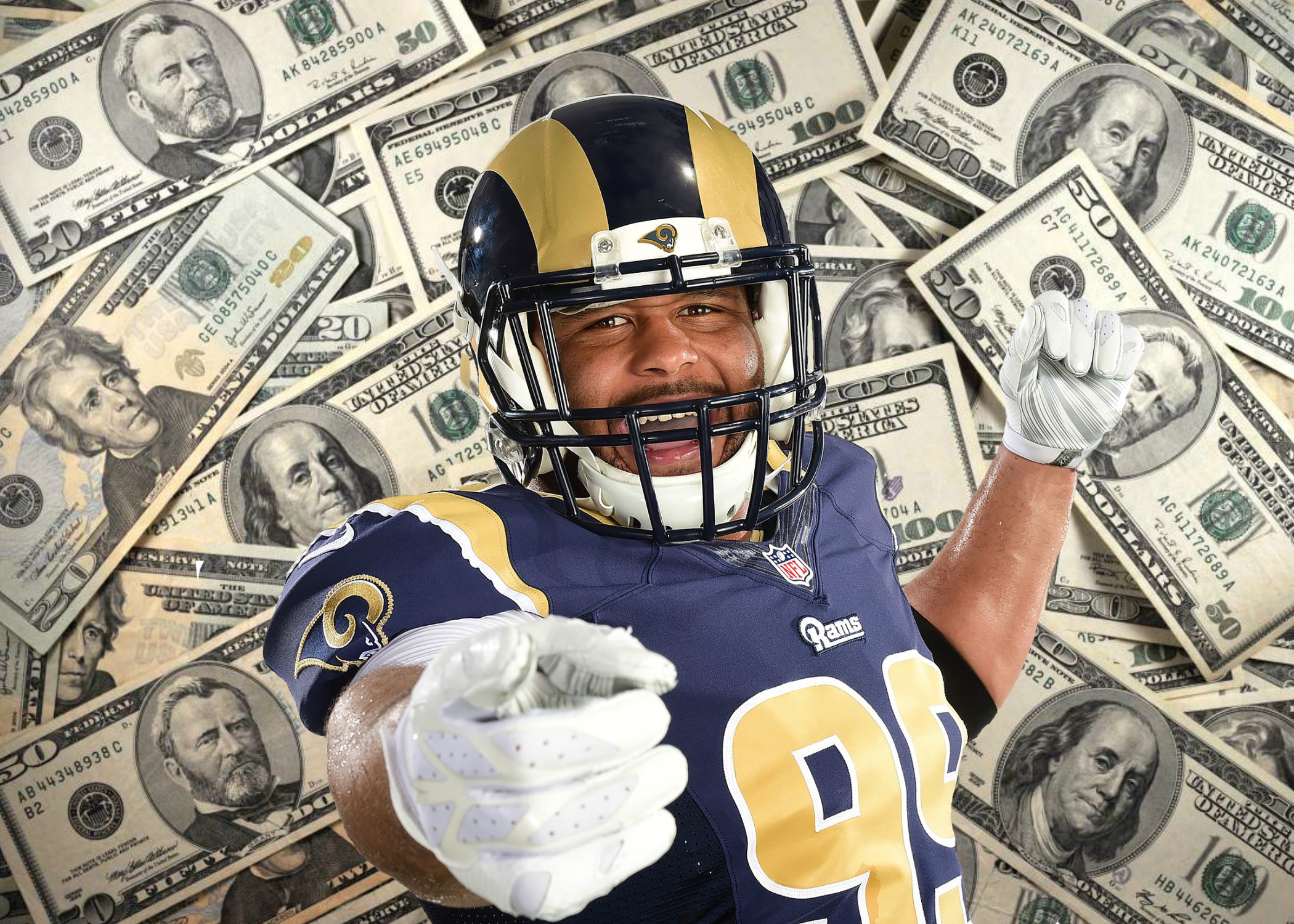 Aaron Donald and the Los Angeles Rams are in a stand-off and according to Adam Schefter, it could go on for a while.

Reports broke on Tuesday that the Rams offered Donald a contract that would make him the highest paid defensive player in the NFL. A deal that Aaron Donald turned down.

The internet is buzzing about a deal worth $120 million over a six year span. On the surface, it sounds like that is exactly the kind of deal that Donald has been pushing for. So why would he say no?

Well it sounds like Aaron Donald is looking for an opt-out clause after the third year of the contract. A lot of Rams fans have not taken this news well. Why would Donald want an opt-out clause? Why would he turn down a deal that would make him the highest paid defender in the league?

Aaron Donald is a smart man. He knows that the 6-year $120 million deal that was offered would not stand as the most lucrative defensive contract for very long and that number would likely be topped by Oakland Raiders star LB, Khalil Mack in the 2018 off-season. Having the opt-out clause would give Donald the ability to scrap his contract after three seasons and start over and try to top the charts again.

After hearing the news of the contract and the details that Donald’s camp was missing, it didn’t feel like a stretch to say that a deal would likely be done soon. Adam Schefter disagrees and is now saying that there is no telling how long this holdout could go on.

This puts the Rams in an interesting situation as the opt-out clause that Donald’s side is asking for doesn’t give the team peace of mind. Locking up one of the best defensive linemen this league has seen in years is something the team would obviously like to do, but Aaron Donald is just one player.

The solution to this issue could simply be time. Aaron Donald wants to play football noted in a quote from Rams defensive tackle Michael Brockers who said that Donald wants to be on the field and that it’s “killing” him that he is not playing. Will the desire to play outweigh the desire for the opt-out clause? Will the Rams start the season without Donald on the line and realize that the opt-out clause is worth having maybe the best player in the NFL on the field and cave? For that answer, we will have to first see if the season begins and Donald is still sitting at home.

One of the more interesting parts of the Rams offer to Donald is their current salary cap situation. Right now the Rams are projected to have under $2 million after the preseason cuts come. Offering an average of $20 million a year to one player could make the opt-out clause that much more interesting. The contract would have to be back loaded as the Rams simply don’t have $20 million to spare at the moment. Back loading the contract could see his most lucrative years being in the final three. Making the decision to opt-out a little more difficult for the Pro Bowl lineman.

This contract issue has had fans stirring about what the Rams should do and what Donald should do, but I do not think it’s a stretch to say that any Rams fan would rather have Donald on the field instead of at home or even worse, on a different team. This holdout has had a negative impact on the team and the fans and with all of the information we have right now, it would appear as if only one side is actually making an effort.

Todd France, Aaron Donald’s agent, is known as one of the powerhouse agents in the NFL and has a number of big name clients such as Demaryius Thomas, Fletcher Cox, Joey Bosa, Julio Jones, JJ Watt, and Ndamukong Suh. Some of which are near the top of their positions as far as salary goes. Todd France does not give in easily.

Aaron Donald is under contract for the next two seasons as the Rams have picked up his 5th-year option. Worst case scenario, Donald does not play for any team for two full seasons. After those two years are up, the Rams have a few options as far as franchise tags go, but it’s hard to believe that any player would holdout for two years in their prime.

If there is one thing I can leave you with to feel a little bit better about the situation, it’s that the Rams want Aaron Donald on the field and Aaron Donald wants to be on the field. Right now, we have more questions than answers. Aaron Donald is not doing himself any favors as far as his reputation with Rams fans go, though.

For all of the latest information surrounding Aaron Donald and other Los Angeles Rams news, stay locked in to Downtown Rams (@DowntownRams) and Rams Showcase (@RamsShowcase).