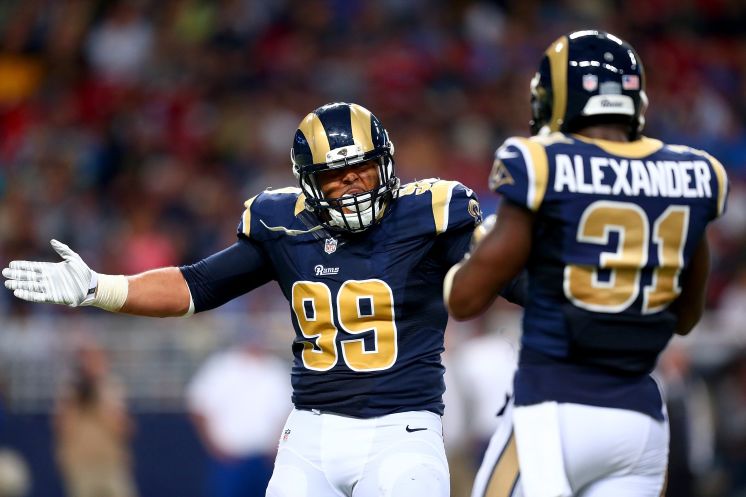 After Donald reportedly turned down a strong offer from the Rams prior to training camp, what can we expect to happen between now and the Regular season?

Aaron Donald is the man of the hour. He has been since he stepped on the field for the now Los Angeles Rams. He has graded out as being one of the top 10 best players in the NFL, if not THE best, for every year he has been in the league. He single handedly has won the Rams games, and changed what it means to play the Defensive Tackle position. Rather than teams just wanting a big man in the middle to clog running lanes, they now look for the next smaller, quicker, and more elusive inside guy that can shed blocks to take runners down behind the LOS and get sacks. Everybody wants the next Aaron Donald, and right now the Rams have him.

But for how long? What once was a player Rams nation could hang their hat on has turned into a problem child. Donald is choosing to sit out with 2 years left on his rookie deal and projected to make roughly $8,600,000.00 dollars in that time, everyone is left asking, what’s the deal?  Hear me out, does Donald deserve to be paid more? Yes, absolutely! In his 3 years he has generated 28 sacks. To put that in perspective, there are only nine other players in the league that have tallied more sacks in that same time, and ALL of them happen to be edge rushers, you know, the guys meant to generate pressure and sacks. He deserves to be paid as not only a premier pass rusher but as arguably the best defensive player in the entire league. So while $8,600,000.00 over two years sounds like the lottery to you or me, in a league where any play could be your last, (not to mention the ever growing reports of CTE concerns) I get why the man wants to be paid.

That however, is where my siding with Donald ends. His attempt to opt out of his rookie deal by sitting is disappointing, at best. Play out your deal and let the Rams take care of you after. Not only is his attempt to get a new deal before his rookie one is up (for all intents and purposes I am considering his 5th year option a part of his rookie deal) a low blow to a franchise that considers you its face, but reports have now surfaced that not only did the Rams compromise and offer Donald a new deal to try and keep him around but according to Adam Schefter’s appearance on the Mike and Mike show Tuesday morning, “[The Rams] made a very strong offer” right before camp. He went on to state “but I don’t think they’re going to budge as long as he’s out of camp. And he’s out of camp. And they’re not going to budge, so we’ve got a standoff…a standstill…whatever you want to call it, that I think threatens to go on for a while here. We may not see Aaron Donald for a while.”

So with that being said, it seems the Rams are open to negotiations, but refuse to take it further until two things happen, Donald shows up to camp, and plays out his 4th year. After that I believe the Rams will try to come up with a deal that makes both them and Donald happy, (Admittedly, mostly Donald) regardless the Rams should be able to afford it. They don’t have a giant contract locked up in a Franchise QB (Goff is still on his rookie deal for at least another 3 years) they’re offensive line is cheap as is their secondary once Trumaine Johnsons tag number is off the books by next year at the latest. With Tavon Austin having the largest cap hit on the team at $16,742,400.00 (that contract is another article for another day) there is a lot of wiggle room for the Rams to work something out for Donald. It will be a mega deal, and something I expect to be in the 20-25 million a year range. A lot of fans might feel this number is too big, after all that would mean you are paying your Interior lineman Franchise QB money.

There is an alternative, since the Rams have control over Donald for the next two years, they could find a willing trade partner and garner some picks. I do not think a player for player trade would work in this case as I feel Donald is too good to swap for another player. His value is best translated to Draft picks. If the Rams went this route, I believe they could garner a current 1st round pick, a future 2nd round pick and a 4th. In my opinion, this is the Rams best bet, put him on the trading block while you still have control over him and get some high draft picks to build your team with. The Rams need offensive Lineman for Goff and could use a 1st and a 2nd to build it up with high pedigree guys. As dominant as Donald is, he can’t help Goff be better and the Rams need to sink or swim with Goff. We all love Donald, and he is an incredibly talented player, hard to argue he won’t someday be in the hall of fame. However he has one thing on his mind and that is money, and the Rams cannot afford to sacrifice their team’s future for one man. They need to build this team up, and cannot do so by investing all their capital into a defensive Tackle.

Let me know what you think the Rams should do or who/what you would be willing to trade
Donald for in the Facebook comments!