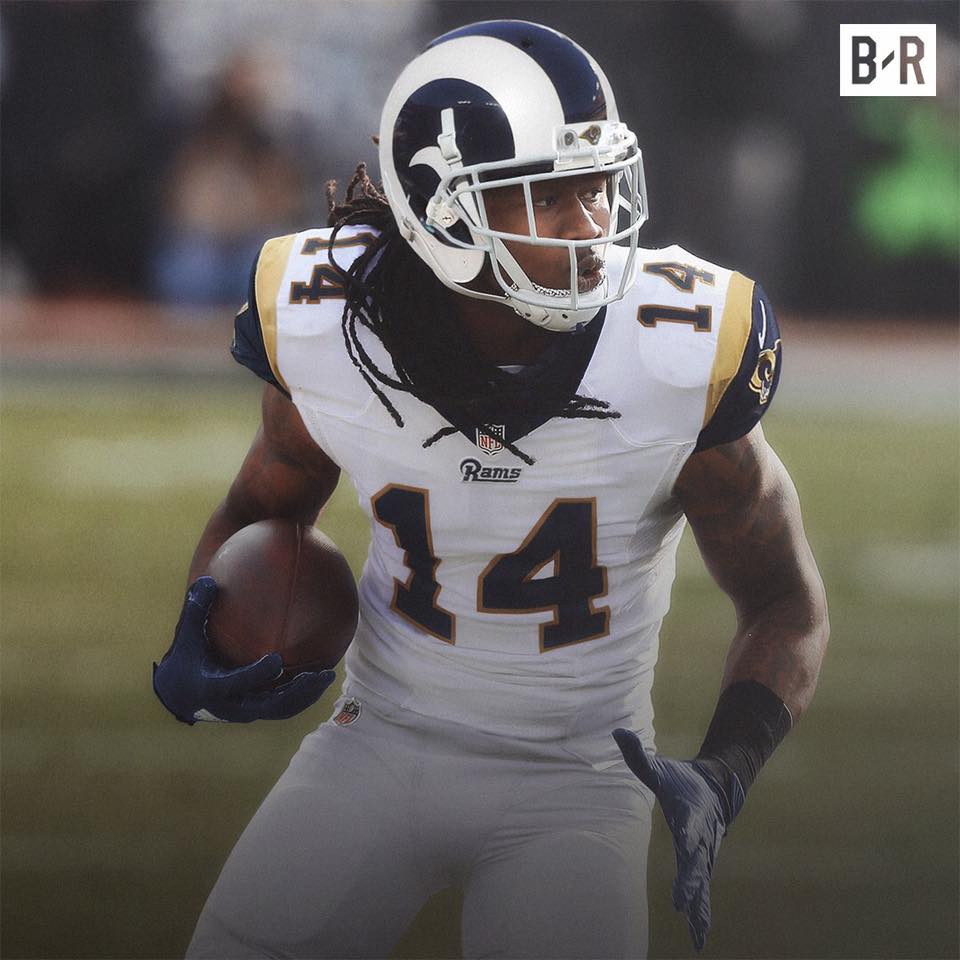 The Los Angeles Rams did something that doesn’t happen all that often in the NFL, and that’s make a big time trade. Unlike the NBA, MLB, and even NHL, the NFL hardly ever sees big players switch team.

However, the Rams did just that Friday morning when the traded EJ Gaines and a second round pick to the Buffalo Bills for Sammy Watkins and a sixth round pick.

While it is uncertain who will eventually win or lose the trade as Gaines, when healthy, is at least good cornerback depth and the 2018 draft class is supposedly a good one.

However, analysts and pundits still put out their winners and losers from the trade and Bill Barnwell of ESPN deemed the Rams losers.

Here’s what Barnwell had to say,

“So much of what the Rams do on a year-to-year basis seems to be about erasing or accounting for the mistakes they’ve made in the past. Here again they’re addressing their disastrous investment and reinvestment in the badly miscast Tavon Austin by shelling out another draft pick and what is (in the best case) going to be a huge contract to retain Watkins for the years to come.

You could understand why the Rams would want to take a shot at Watkins, but the 2018 free-agent wide receiver class is staggering, including players like Matthews, DeAndre Hopkins and Allen Robinson. Some of those guys will re-sign with their current teams, of course, but maybe the Rams end up giving someone like Jeffery or Terrelle Pryor a big deal. That wouldn’t be the end of the world.

What’s frustrating about this move is that the Rams had to give up a second-round pick to acquire Watkins. Given that they’re unlikely to be very good — ESPN’s FPI projects them to finish with the league’s fifth-worst record — chances are they’ll be sending a high second-rounder to the Bills to acquire a player who hasn’t been healthy for most of his career.Last year’s No. 1 overall pick, Jared Goff had a disappointing rookie season.

After trading away a bevy of picks to acquire Goff, the Rams can’t be in the pick-trading business. If anything, they should be looking at trading down and acquiring selections. (I realize they’re getting a sixth-rounder, but per Chase Stuart’s chart, even the top pick of the sixth round is worth just 12 percent as much as the fifth pick of the second round, the selection the Rams project to send to Buffalo.)

Even if Los Angeles’ bet on Watkins works out in 2017, the Rams are going to be stuck using their franchise tag or making a long-term bet on a player with a history of foot injuries. They could recoup a compensatory draft pick if they let Watkins leave, but that assumes Watkins will have a big-enough year to justify a serious deal in free agency while the Rams themselves mostly sit out, which seems like a very unlikely proposition.

They’re also going to be in serious trouble at cornerback, where they just traded away Gaines and won’t be able to afford franchising Trumaine Johnson for a third time after the season. Wade Phillips is a defensive genius, but the best guy on Los Angeles’ depth chart for 2018 appears to be Broncos import Kayvon Webster, who played 58 defensive snaps last season and has spent the last several years buried underneath a stacked depth chart in Denver.”

Barnwell makes a lot of solid points. First off, coming out of college at Clemson, Watkins was the number one receiver ahead of Mike Evans and is still just 24 years of age. There is a lot of upside here with very little risk.

However, Watkins is on the last year of his deal with no guarantee that he’d re-sign. The wide receiver adds to the list of names such as Alec Olgetree and Lamarcus Joyner who need to be extended. Not to mention Aaron Donald.

The Rams are a team with a lot of holes, and second round picks are high picks. Really good players come out of the second round. That’s not to say Watkins won’t be a solid player, but as mentioned, there’s no guarantee he even stays on the team or stays healthy for that matter. Watkins hasn’t finished a full season since his rookie year.

Les Snead and company gave up a plethora of picks to pick up Jared Goff and while they are helping him by giving him a legitimate weapon, they are also not in the position to be giving up picks willy nilly. They will need to continue to fix the offensive line as well as add to the secondary, and that was with Gaines.

Without Gaines, the Rams are left in a predicament. Given that Trumaine Johnson is most likely gone after the season, the former sixth round pick was slotted to be the second guy behind Kavyon Webster. The Rams dont have good cornerback depth as it is and just got rid of someone who could play the outside if necessary and play it well.

While Barnwell gave the Rams as a team a loss he said that Jared Goff comes out a winner saying,

“As the Rams try to build some sort of offensive infrastructure for the 2016 first overall pick, it’s hard to imagine their acquiring a better receiver to work with than Watkins, who averaged 80.5 receiving yards per game while healthy in 2015, good for what would be nearly 1,300 receiving yards over a 16-game campaign. While Watkins hasn’t lived up to the draft-day trade that saw the Bills deal two first-round picks to move up and acquire him ahead of Mike Evans and Odell Beckham Jr. in 2014, injuries have been the problem, not talent.”

Unlike what the team did with Sam Bradford, the Rams are giving Goff a legitimate shot at turning his career around for the better. They brought in Andrew Whitworth, drafted Gerald Everett, and now trade for Watkins. The second year quarterback can’t be more happy.

“This was always going to be a huge season for Watkins, who was set to hit unrestricted free agency after the Bills declined to pick up the fifth-year option on his rookie deal for 2018. Last year was a lost season for the Clemson product, given that the Bills repeatedly pushed Watkins onto the field with a clear foot injury before Watkins finally underwent what ended up as two surgeries on his left foot.

It seemed likely that the Bills would part company with Watkins after the year regardless of what happened.It’s hard to see how Watkins will be in a better situation for either his short- or long-term future. After being traded to the Rams, who gave up a starting cornerback and a high pick to acquire him, Watkins is likely looking at the franchise tag if he breaks out in 2017. It’s not clear that would have been the case in Buffalo, and the tag will cost him millions of dollars versus what he could get on the free market.

He’s also now set to play out his contract year with Goff, who was one of the worst quarterbacks in recent memory during his debut season, as opposed to the criminally underrated Tyrod Taylor. Goff should be better during his second season, especially with the arrival of Sean McVay from Washington as coach, but there’s a chance Watkins is relying on a replacement-level quarterback to make him millions of dollars.”

Watkins joins an offense with hopefully a bright future, but one that was also lead by the worst quarterback in the NFL from a season ago. That’s not going to help his value when or if he hits the open market this offseason.

Tyrod Taylor, while not a great quarterback, was able to do enough and was certainly a better option than Goff.

However, he joins a much better coaching staff offensive-wise and also joins former teammate Robert Woods whom he played with in Buffalo.

Time will tell if the Rams really are a loser in this trade, but for now, they’ve given Goff a legitimate weapon on the outside and have given the offense a real chance to improve from the last two years.