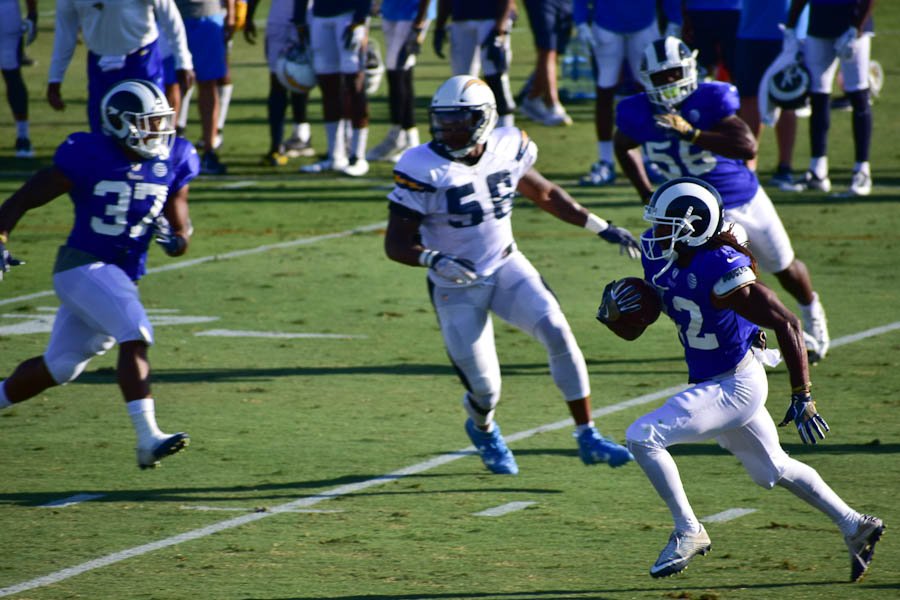 The NFL preseason may seem pointless to a majority of fans, but for the writers and players trying to make their mark on the team and make the roster, it’s an exciting time.

This may be the only chance all season in which fans get to see what the bottom of the roster guys can do and what the Rams have in them. It all starts on Saturday against the Dallas Cowboys.

As was seen last year when Nelson Spruce shined, it only takes one game to impress and do enough to make the roster. Here’s five players who will need to start the preseason strong in order to make their mark on the roster.

One of those guys is wide receiver Shakeir Ryan. Ryan was signed earlier in the summer for a tryout and head coach Sean McVay saw enough to bring him to camp.

He’s a long shot to make the roster, but with openings at kick returner and punt returner, Ryan does have a shot. In Wednesday’s joined practice with the Los Angeles Chargers, the 5’8 wide receiver returned a punt for a touchdown. He may not have to make that big of a play to make the roster, but he will need to show that he can be a threat in that area.

Brown most likely will end up making the roster, however, he can solidify himself as the number two back with Lance Dunbar out. Brown impressed last year in the preseason and will need to do so once again.

Todd Gurley won’t play a lot therefore Brown could get a significant amount of carries. Take advantage of those carries and he could play himself into a larger role once the season rolls around.

The Rams need depth at the cornerback position. Currently last on the depth chart, but with a lot of upside is cornerback Kevin Peterson. There are currently nine cornerbacks on the team and it’s likely only five would make the final 53.

Peterson will need to make a big play early if he wants any change of beating out players like Troy Hill and Mike Jordan for a roster spot. Peterson has impressed thus far in camp, but still the numbers aren’t in his favor. He’s going to need to show what he can do with the lights on if he wants any chance of making the roster.

As mentioned with Ryan earlier, you can almost throw any back end wide receiver here. However, in Cannon’s case, it’s even more true. This is a guy that arrived to camp last week and will have a lot of catching up to do.

If the former Baylor wide receiver can prove that he can be the deep threat the Rams need, McVay may make a roster spot for him. However, he has a long road ahead and will need to prove just how much of the playbook he’s absorbed in his short amount of time. He has talent, but will have a lot to prove this preseason.

Now, there is 0% chance that Goff gets cut, but that doesn’t mean he doesn’t need to stand out against the Cowboys. If the second year quarterback struggles early, fans are going to be calling for Mannion right away.

However, if he can put together a solid performance, it will give the fans some reason to get behind him. Goff needs to build confidence and gain the approval of the fan base after last season. That starts against the Cowboys.