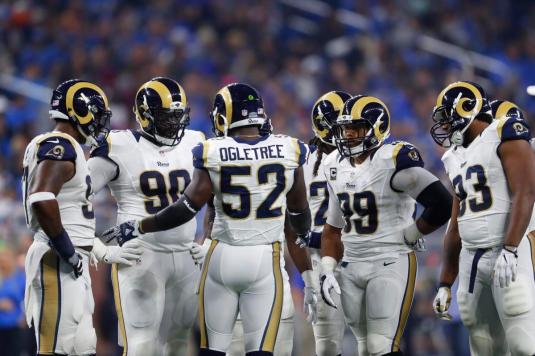 Will Rams Sink or Swim switching to a 3-4?

New Location, New Coach, New Defense, New Scheme. New, new, new it is all new. Who knew it could be so new? Ok enough fun.

This year will be an interesting one for Rams nation, we have a lot of projections to make. Will Goff take that next step? Will Gurley Rebound? Should Austin really have been paid all that money? Where is Donald? I want to focus on one that I am passionate about. The Rams and their implementation of the 3-4 Defense with Wade Phillips.

I am a 3-4 fan boy. My number 1 team has been running it for years. Yes the elephant in the room has been addressed, I am a Steelers fan. But I promise you I know a lot about football and while the Steelers are like a brother to me, I grew up watching the Rams like a cousin I always hope the best for. Ok enough pleading my case, back to schematics.

The 3-4 Defense is a different beast. In an age where flexibility and hybrid defenses are a must there are still major differences in a 3-4 compared to a 4-3 and the personnel very rarely can switch over and run it within a year. 3-4 defenses need big men up front on the line and an extra linebacker. 4-3 defenses need four athletic men up front and one less linebacker.

This year they the Rams OLB are slated to be Connor Barwin and Robert Quinn. For the most part you will see them lining up and pinning their ears back to get after the QB. Gone are the 4-3 days where the OLB is roaming around making tackles 5-15 yards down field, that’s the Inside linebackers jobs now.

Barwin and Quinn get a nod from me, they can hold their own on the line and generate pressure. Now we move to the 2 inside linebackers, Ogletree and Barron. Yes please, Wade Phillips will have two athletic Inside Linebackers flying around making plays for him in a day and age where athleticism at that position is at an all-time premium. Were in a league where guys like Telvin Smith, Ryan Shazier, Luke Kuechly, Rueben Foster are what you want in an inside Linebacker, having two athletic hard hitting players at that position is exactly what you need to make a good transition to the 3-4. Ogletree and Barron get a nod and a handshake from me.

Next we have the D-line, the other major difference in a 3-4, you have 3 down lineman, so naturally they need to be big bodied players to take up space and eat up blockers so that the athletic inside linebackers can clog up rushing lanes and make plays. Michael Brockers at the nose is a perfect fit, he’s a mammoth of a human being and can take on double teams all day, exactly what you need. Donald at one end spot would be amazing but considering his holdout, we will leave him out of the lineup. That leaves Ethan Westbrooks at one end spot and Trinca-Pasat at the other. This is where things get shaky for me. Trinca-Pasat is an undrafted free agent who has not shown he can take on blocks and drive back the pocket consistently. He is also built more like an interior lineman than a 3-4 defensive end. Westbrooks has some nice talent and pedigree, but he is undersized for a 3-4 defensive end coming in at under 290 pounds (you generally want your 3-4 ends to come in at 6-4 and 300-310 pounds) I have questions about how he can hold up against some of those maulers he will have to face at the Guard position. The two defensive ends get a thumbs down while the NT gets a nod.

If we break it down into an math equation I approve 5/7 of the men making the transition to the 3-4 (I am choosing to exclude secondary players as their roles are not as heavily influenced by the shift in philosophy) I think the Rams have a talented defense with or without Donald and with Wade Phillips, they will have the right coach mixed with the right personnel in order to make the transition over from a 4-3. It may not be pretty at first as everyone gets their roles figured out and comfortable with some of the philosophy changes, but I anticipate the Defense being a point of strength again for the 2017 season.