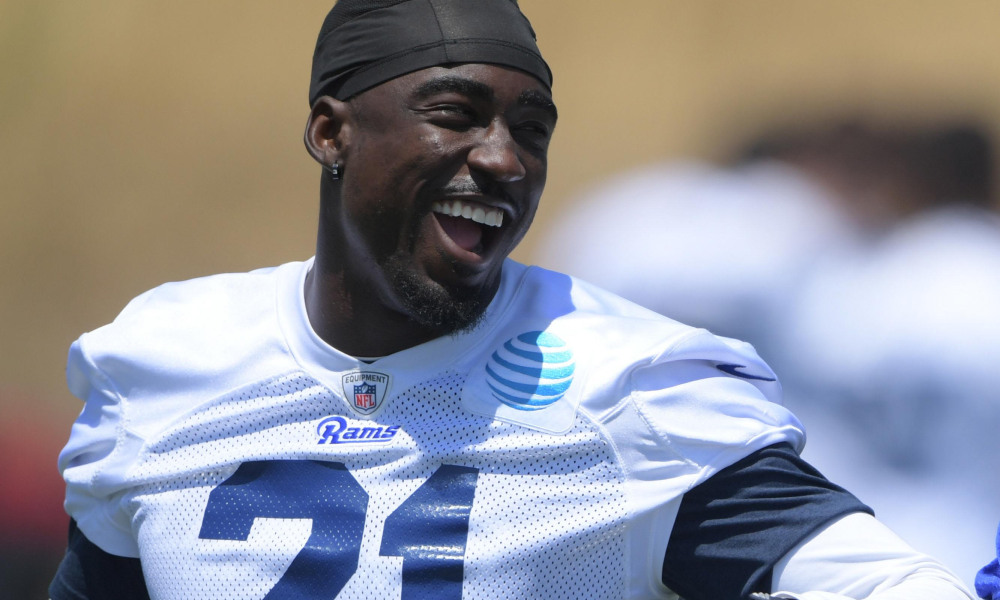 E.J. Gaines has made waves and has been battling with Rams new signing CB Kayvon Webster for the starting job on the outside. It appears that battle has been won by Webster, at least for now…

Rich Hammond tweeted this out about Sean McVay and what he had to say about Kayvon Webster:

That seems like it’s pretty cut and dry that coach McVay is ready to roll with Webster and Trumaine Johnson moving forward at corner. Gaines has fought hard for the spot, but Webster has ultimately proven to coaches that he belongs as a starting cornerback in the NFL, just like they thought when they signed him in free agency this season. For Webster, it’s been a waiting game. He has been ready and stayed ready for when his number was called, but it was called on a very limited basis in Denver. The Broncos knew Webster was a rare special teams ace so they kept him in that role almost exclusively. Webster showed off his ability in his limited reps at cornerback, but with the Broncos possessing the elite duo of Chris Harris Jr. and Aqib Talib, not to mention Bradley Roby. It became damn near impossible for Webster to see the field.

Webster has continued to work hard regardless of the situation and has continued to stay humble. We had the privilege of interviewing Kayvon on our podcast in which he showed that he was a passion for the sport, he has a hard-working demeanor and he is a patient and humble man. Webster waited his turn, paid his dues and when the time came he set his playing field.

Overall for the Rams this is a great move, we have all been saying this since he was signed, Kayvon is going to start for the Los Angeles Rams in 2017 and it’s going to be fascinating seeing him start under his old defensive coordinator Wade Phillips. That is after all the main reason Kayvon ventured out west with the Rams. If you don’t believe us, he said that on our podcast. Coach Phillips is as legendary as they come and is ready to get the most out of Webster.

As for the Rams and mainly Les Snead. Webster’s potential breakthrough season is a bright light of sunshine on an organization that was unable to basically retain any of their original secondary. With Trumaine Johnson likely being a rental in 2017, the Rams need the most out of Webster. He offers a ton of upside and the possibility to be one of the faces of the Rams new regime.