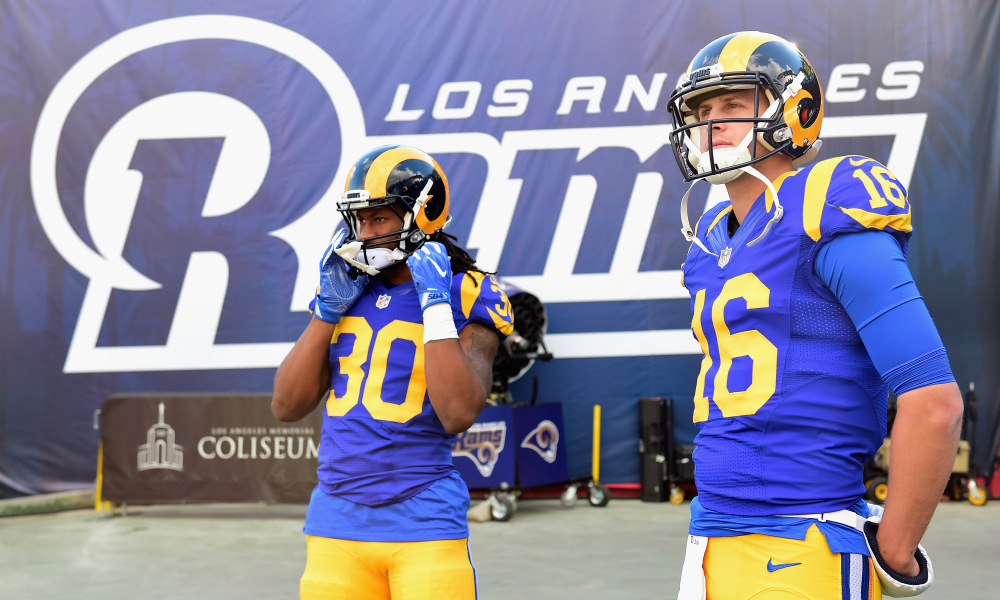 Gurley, Goff, and… Gerald Everett? The three G’s, G-Unit if you will. Every great franchise needs the Big Three. New England has it with Brady, Gronk, and Edelman. Pittsburgh has it with Ben, Brown and Bell. Arizona, with Johnson, Palmer, and Fitz. The list goes on… more importantly the last time the Rams were a respected franchise they had it, with Warner, Faulk, and Holt/Bruce (flip a coin there).

Last year things were rough, I agree. It ended in a year where what once was a promising stud in Todd Gurley rushed for under 900 yards and averaged an anemic  3.2 yards per carry. (On roughly 50 more rush attempts than his 1000 yard season in ’16 mind you) A number one pick in Jared Goff, who the Rams bet the house and life insurance policy on, ended the season with a QBR of 22.9. The Rams fired their head coach, said goodbye and moved to LA then finally with their first pick in the ’17 draft, drafted a tight end with hands the size of my grandmothers (8 ½ inches to be exact, Gronks hands being 2 ¼ inches larger).

None of this sounds good, and right now you are probably asking “is this guy even a Rams fan? What is his deal?” Well I am here to say I believe there is hope. Do I think it will come this year? No. Next year even? Ha-ha no. Three years from now? Maybe…But I believe in Mcvay, I think he is exactly the type of coach you want to come in and lead a culture (and location) change for the Rams organization.

Mcvay is the type of coach with brains and swagger. Players will respect him and coaches will listen to him. He has good ideas and wants to run an offense that I think this team is built well for. (Sans that awful offensive line). Goff needs a rhythmic offense, 3 step drop, scan, throw that’s where he thrives and that is what Mcvay has already stated he wants to bring to the offense. A sense of rhythm and precision will not only be good for Goff now but will help develop him down the road. He has the arm talent to make every throw, he has the brains to understand an offense and we all know he isn’t afraid to take a hit while standing in the pocket after last year. In 4 years’ time I believe Goff will have the better career when looking back at the Wentz vs Goff debate. Yes I know this is unpopular opinion in the NFL right now (don’t @ me) but sorry national media, I am not ready to crown Wentz the franchise QB that the Rams missed out on after 1 year. Show me back to back years with steady improvement first.

I digress, let us talk about Gurley. Everyone knows he has all the talent in the world. He is fast, explosive, agile, strong, and has breakaway speed. The Rams o-line was catastrophic last year and no team was fearing the turnstile at QB which in turn, did not help clear out rushing lanes for Gurley. We have seen what he can do with a decent line and some threat of a passing game. The future star of this offense is Gerald Everett. “You mean the guy you said had smaller hands than your grandma?” No, I said he has hands THE SIZE of my grandmas, and she has big hands! I joke of course, yes his hands are small but his talent is undeniable. He was drafted at pick number 44 and the first pick of the Mcvay era for a reason, because Mcvay sees in him what he had in guys like Jordan Reed. A game changing Tight end, and not just a Tight end but an elite level weapon and chess piece for Goff to feel safe throwing to. I am not exaggerating here, Everett was that good in college, I watched tape till my eyes were bleeding on him and guys like him during the off season. He is a big bodied weapon, with top notch body control to make contested catches deep down field and the speed and athleticism to split linebackers and safeties down the seam, oh and he can block.

Needless to say the Rams have not been good for the past 15 years and it has been tough to watch, but things are changing, for better or for worse. There is a lot of ifs and buts involved in projecting how the Big three will turn out, but the ceiling is high. Gurley, Goff and Gerald will either light it up for years to come and challenge the Greatest Show on Turf or become another blip on the timeline of wasted picks and hard times for Rams nation. Count me in as looking forward to representing G-Unit for the next 10 years and just maybe, even watching them lead a team back to the Super bowl.