Rams offense primed to shock everyone this season 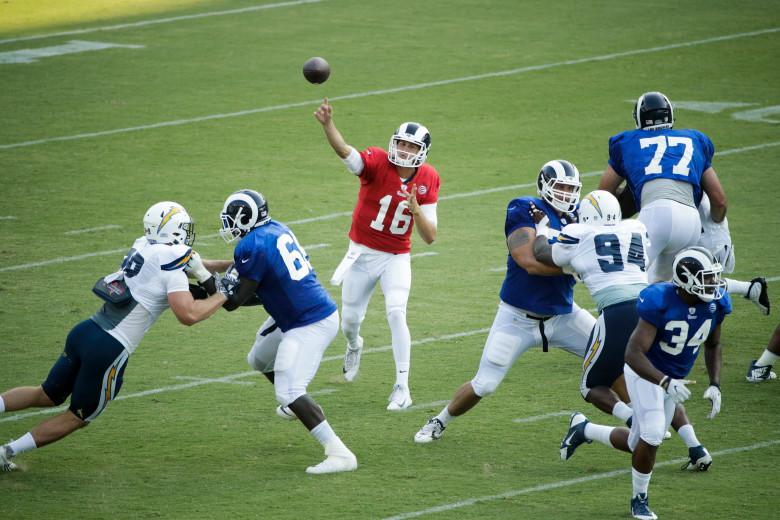 The Rams just had their first look at a team other than their own this season. It came in the form of a day trip to the StubHub Center in which they practiced and scrimmaged with the Los Angeles Chargers. Yesterday, the Rams shown some good and some bad, but overall there were plenty of good to take away from their first joint practice of the season.

Jared Goff and company had some struggles on third down, but all in all they looked on the same page and especially impressive during the two-minute drill. Joe Curley of the Ventura County Star charted all of Goff’s passes at a 65.7 completion percentage. A percentage which the Rams fans, teammates, coaches and brass would all take in a second for Goff in year two.

Part of the reason Goff may have looked so comfortable yesterday could be the fact that Andrew Whitworth is now protecting his blindside. Whitworth has dominated the Rams all training camp and now he brought it over to StubHub versus the Chargers. Don’t believe us? See for yourself, here is official Rams announcer JB Long tweeting out this one-on-one matchup between Whitworth and a very good edge rusher in Melvin Ingram.

Do you even realize how good Andrew Whitworth is? The Rams instantly upgraded their offense a ton just by acquiring Whitworth via free agency. Forget about the veteran leadership he brings to the table, it’s just the fact the Rams bring in a tackle that is going to do his job and do it well on top of the consistency he has shown his whole career. Whitworth’s production will translate and spread to the rest of the offensive line group. Which brings us to the next point…

Goff is not the only one benefiting from a revamped and improved offensive line. Nope, that would also fall along the lines of the running backs and mainly the starting running back Todd Gurley. Don’t forget Gurley was named the Rookie of the Year in 2015. That offensive line wasn’t anywhere near as good as the one the Rams are projected to have in 2017. Now, going to last season, that offensive line was nowhere near as good as the 2015 offensive line. Are you tired of people forgetting the name Gurley when ranking the top running backs in all of football? We are too, which is why this season could be really fun. Head coach Sean McVay went on record saying that Todd Gurley ran violently yesterday, but he didn’t receive that praise for nothing. No, Gurley did run violently yesterday and that comes from a likely confidence boost between everything that has happened this off-season.

That confidence boost likely has been contagious for everyone this off-season. We mentioned that Goff came through in the two-minute drill above, but so did the receivers. It looks as though judging by camp and the joint practice yesterday, that Cooper Kupp and Robert Woods are going to be Goff’s go-to wide receivers. JB Long was able to get the Rams two-minute drill on film that showcased Goff making some nice throws and receiving some nice field awareness, separation and hands from a few of his receivers. Including lesser mentioned Pharoh Cooper and Paul McRoberts who worked quite a bit with the one’s.

The Rams offense does not look like that of the Greatest Show on Turf or any of the high octane offenses in the league today, but they look like just the offense the defense that they are equipped with has needed for years. The defense is going to succeed and likely be a top 5-10 unit, but in order for them to translate to winning they will need some offensive help. With the addition of the new coaching and players such as Kupp and Woods. It appears the Rams will likely operate more often than not in the short and intermediate game for the passing attack and likely pound the rock with Gurley and backup running back Malcolm Brown.

Again, it might not be the greatest looking offense ever, but if the Rams can consistently move the ball and put points on the board as well as staying on the field long enough to give the defense a rest. They will be able to win a lot of the types of games they lost in the last minutes last year. It’s also important to keep in mind that last year, Goff did not receive the amount of first-team reps as starting QB Case Keenum. This year, Goff is the starter and is building what could be something special with his young offensive weapons.

If you don’t believe the Rams offense is improving you might be caught off guard when the season starts and that’s not necessarily a bad thing.

POLL: Which under-the-radar WR do you have making the Rams roster?