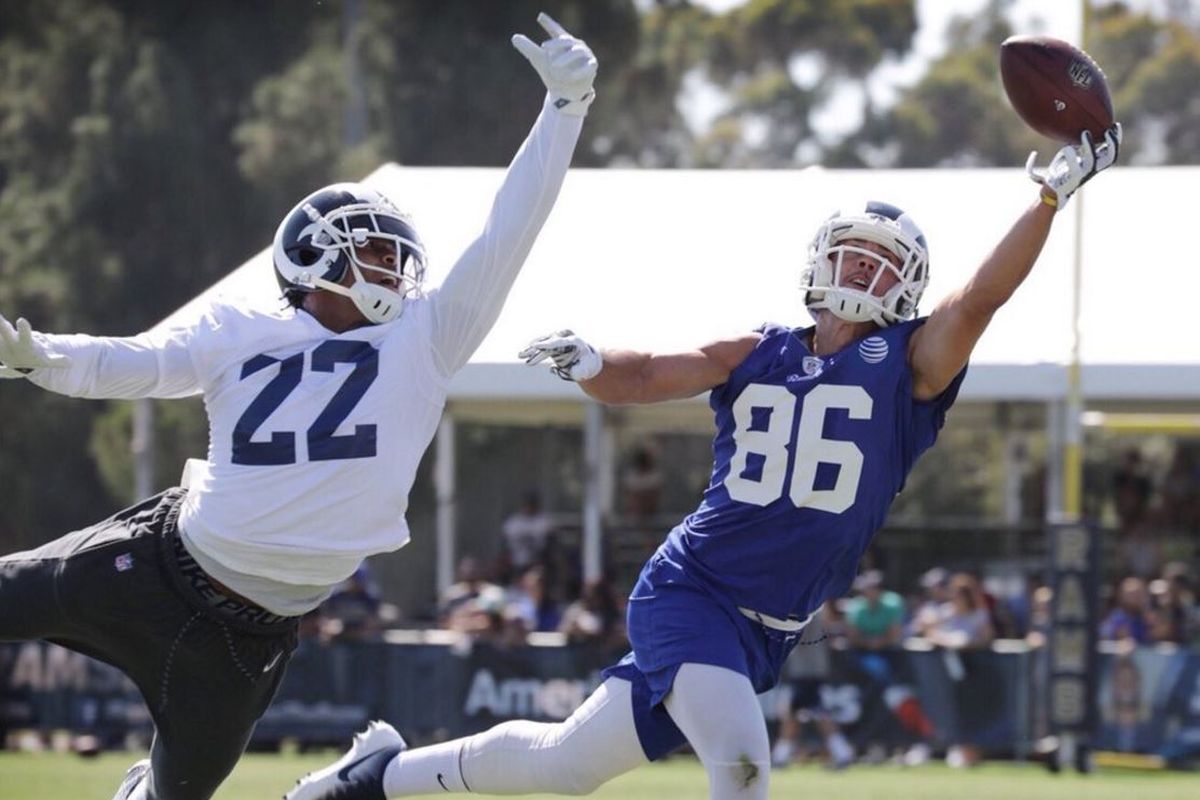 The Rams have dealt with some minor injuries and have brought three new faces into the receiver group that is already considered “crowded”. Here is a look at the overall group broken into tiers. 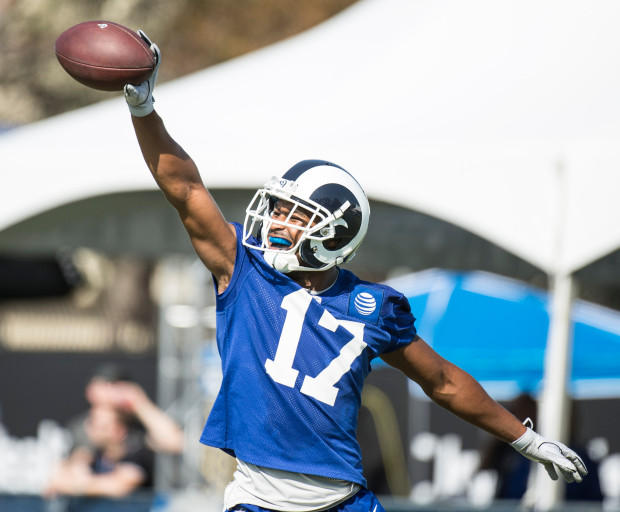 A group that is made up of one returning starter and two new faces for the 2017 season, one of which was not even in the league. Robert Woods leads this group into the new season as the big free agent acquisition the Rams plucked from the Buffalo Bills. Woods is looking to maximize his full potential in a system that will utilize his set of skills more than Buffalo did.

The wildcard here is Tavon Austin. It would be crazy to some, but Austin, if he does not show enough could be traded away to make room for other players on the roster. I like Austin a lot, but if he can’t get it done in a Sean McVay and Matt LaFleur led offense. You have to question if he can get it done anywhere else/ Austin has show in the past he is capable of making unique plays, but he is going to need to prove he can stay healthy and be consistent moving forward. It’s important to remember he started off OTA’s with an undisclosed wrist injury and now he has a hamstring injury that could, for all we know, linger.

Last, but not least is the Eastern Washington four-year starter Cooper Kupp. Kupp has been the favorite among fans as a rookie that can come in right away and play at an above average level. The Rams have shown early on that they want Kupp and young franchise QB Jared Goff to build the chemistry as a dynamic duo moving forward. Goff, during this training camp has been able to throw it at Kupp often and Kupp has not disappointed.

Overall, I believe this group can be put in ink besides Tavon Austin. With the injuries, this could open the door for fan favorite Nelson Spruce, Pharoh Cooper or even rookie fourth-round pick Josh Reynolds. 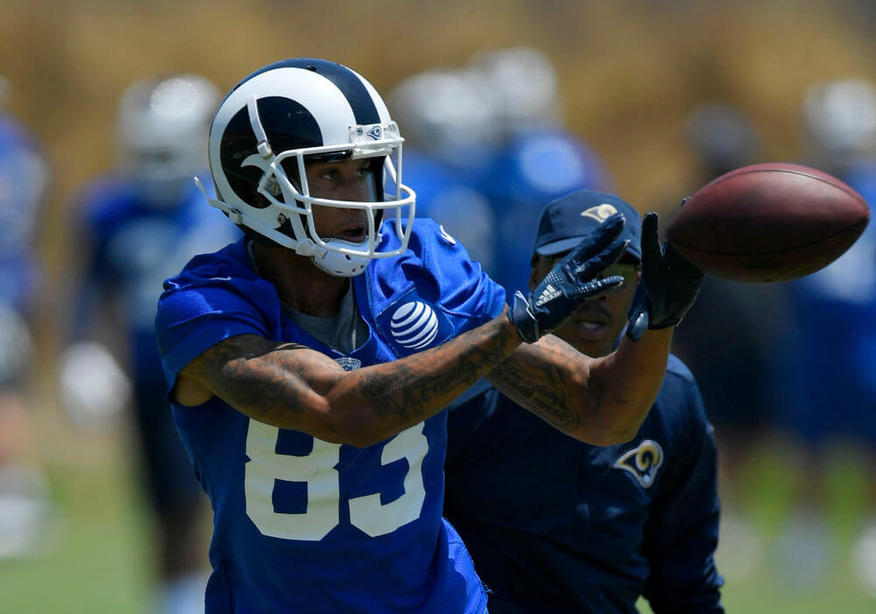 This next group is made up of two back-to-back season fourth-round picks and a former UDFA that might be more popular to Rams fans than Cooper and Reynolds combined. Nelson Spruce is looking to make magic in his second season which would basically be his rookie season since he only played in week one of the NFL preseason. Spruce brings high-motor, reliability and ability to make every catch in the book. Spruce isn’t fast by any means, but he is quick and is able to create separation. Unlike last year, it appears Spruce is more than likely to make the roster.

Rookie receiver Josh Reynolds is one of the tallest receivers on the team so he adds a taller target for Goff. Reynolds is looking to find his role in his rookie year. You could likely make the argument the Rams drafted Reynolds for next year and the years after that, but if he can contribute this year then the Rams will more than likely deploy him in game situations, most likely red zone situations where he can win with his size.

Pharoh Cooper is the last one in this group who filled in on Friday for injured Tavon Austin. Cooper is a player that won’t wow you with his speed or size, but he is able to make plays in space. Cooper is known as a shifty player that could be a legitimate receiver out of the slot. South Carolina employed Cooper in all sorts of creative situations back in college. The Rams however, didn’t last year and part of that was because Cooper missed multiple games after suffering a shoulder injury versus the Denver Broncos in the preseason.

This group might be missing Mike Thomas in some people’s opinion, but I think Thomas being on the PUP  list and with his four game suspension has to fall down the depth chart a little bit. 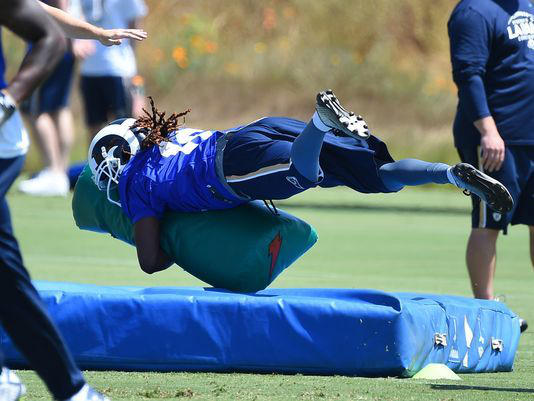 The group here showcases one of the best special teamers in the NFL, Bradley Marquez. Marquez has been on the roster since May 2015 back when he was signed as a UDFA that was given no chance to make the team. He made it, and now he has made an impact on special teams and even has been on the field in limited offensive opportunities. The question remains, how much of a premium are the Rams going to put on Marquez’s special teams ability? There is a chance Marquez faces the chopping block and is no longer a Ram when the cuts come in.

The UDFA speedster Shakeir Ryan made some waves in his tryout with the Rams in which our friend Joe Curley of the Ventura County Star had to gush about him a little bit during the day. The Rams ended up signing him to the 90-man roster and has been on the roster ever since. Ryan is a speedster that has some intriguing upside as a slot receiver down the line, but his main role would likely be on special teams and mainly as a kick returner to replace free agent loss Benny Cunningham.

Newly signed receiver Justin Thomas is a former QB from Georgia Tech a couple years ago who has made the transition to receiver (or at least trying to). Thomas is another speedster looking to make this Rams roster as a return man. The other fellow newly signed receive C.J. German from Notre Dame College is another candidate to try and take that kick return job. 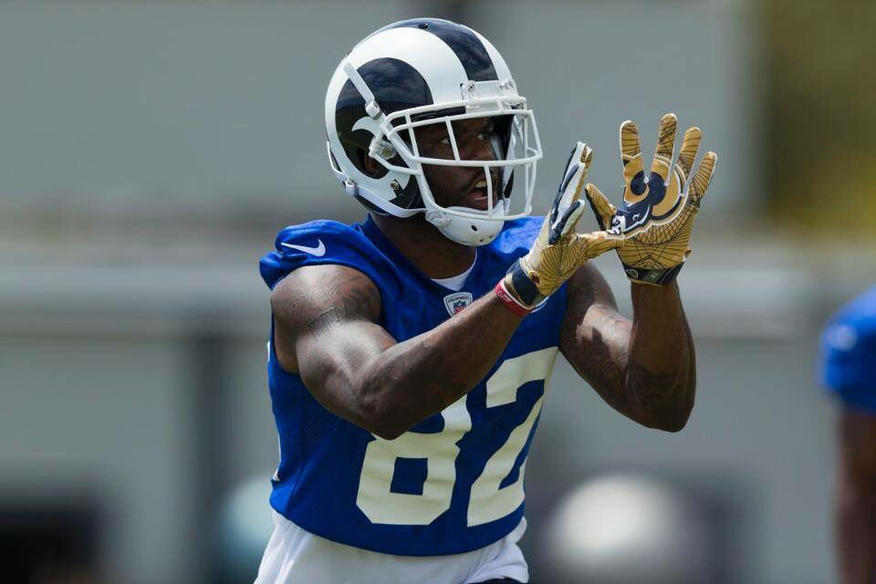 Don’t get the group above and this one confused. There is no higher tier, they are both practically on the same wave length. In this last group, the headliner is former sixth-round pick Mike Thomas. Thomas would likely be pushing to be in the starting lineup, but a nagging injury and his four-game suspension as mentioned previously push him down the depth chart. Thomas will have to get healthy and prove himself as the Rams can keep him on the suspended list until week five of the NFL season, that’s not the issue. The issue ultimately lies with the Rams finding it necessary to let a man go a quarter of the season in for Thomas. The question is this, would the Rams add Thomas off of the suspension list or let him go? That’s not a question anyone has the answer to right now.

Next in line is likely a player that showed some flashes in camp and preseason last year, Paul McRoberts. The second-year receiver ended up getting on the 53-man roster later on in the year which is likely a good sign he could be ahead of others on the depth chart. The key for McRoberts is special teams and getting coach John Fassel to bang the table for him or just McRoberts making enough noise in preseason that leaves the Rams with no choice, but to keep him on the 53-man roster.

Brandon Shippen has intriguing upside and on top of that it’s also intriguing how Shippen has stayed on the roster throughout the whole off-season while others have met the chopping block. Shippen was a member of last year’s Rams practice squad and was signed to a futures contract in which he has since stayed a Ram. Shippen has the advantage of being a player that may not have played last year over some, but he gets a clean slate with the new coaching staff. This is definitely the ultimate wildcard to keep an eye on since no one has a clue what the Rams think of him moving forward. If he doesn’t show out enough in preseason, the Rams may think they can sneak him onto the practice squad again with limited tape on him.

Finally the last receiver added to the fold, KD Cannon. Cannon was one of my favorite receiver prospects coming out of this year’s draft. He somehow went undrafted, was signed by the 49ers and Jets then was cut by both teams. Now, Cannon is going onto his third team in the L.A. Rams and he has to be hungry for success at this point. Cannon is definitely a name to watch out for, the Rams actually, are familiar with Cannon. Back in April before the NFL Draft, Cannon was someone the Rams had their eye on and actually ended up having a visit with him. Now, the Rams bring him in as a speedster with some serious upside and some underrated ball skills. McVay clearly must not be comfortable with how the receiver room looks right now with the three new faces in town. Cannon has the most upside of nearly anyone on the roster and has a chance to not only make this team, but possibly spell a banged up and potentially struggling Tavon Austin, should that arise.

That’s a look at all the receivers on the Rams right now, here is a quick little prediction for which receivers make the 53-man roster.

What are your thoughts on the receievers? Let us know!

POLL: Which under-the-radar WR do you have making the Rams roster?