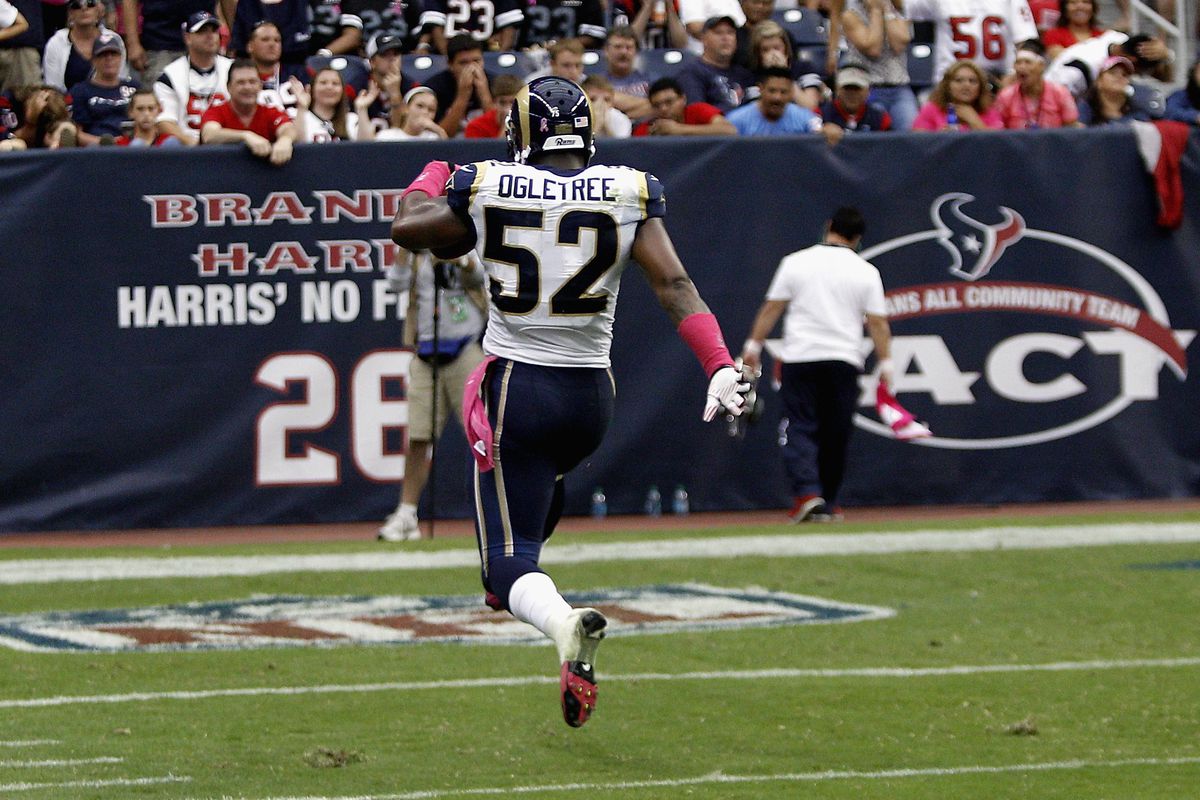 After recent reports Rams inside linebacker Alec Ogletree spoke out and told Gary Klein of the LA Times that he and the Rams were working on a new deal that would extend Ogletree past his last year and beyond with the Rams. Here we look at what a potential Ogletree deal would look like.

Ogletree was one of the Rams two first-round picks back in 2013, the other was WR Tavon Austin who has already received his new deal. Ogletree however, has not and you could easily argue despite being picked 22 picks after Austin, he has been the more productive player. Ogletree came into the league as a very talented outside linebacker that could easily run sideline-to-sideline and make plays all over the field. He instantly started on the outside when he got to the Rams as Rams legend James Laurinaitis stayed on the inside as the captain of the defense. Little did Ogletree know that the Rams had huge plans for Ogletree which ended up turning him into the man in the middle and the captain of the defense after the Rams parted way with Laurinaitis.

In his first year inside he dealt with some lapses in a role he was still learning, but he ended up being selected as a second-team All-Pro. Going into this year the Rams have his fifth-year option picked up, but they know they have their minds made up and want the 25-year old Ogletree for the long haul. That is why the two continue to work on a deal. Ogletree has played in 52 games and has starting in all of them, he had the unfortunate broken fibula that caused him to miss 12 games in 2015, but he came right back in 2016 and played his heart out.

The 6-foot-3, 242 pound linebacker has accumulated 406 combined tackles, 3.5 sacks, 11 forced fumbles, 32 pass breakups, five interceptions and a touchdown as pictured above. So now it’s time to see what his contract numbers look like according to Spotrac.

With the contract Spotrac is projecting for the Rams linebacker, it would appear that the Rams would spend almost nine million dollars annually on him and would put their cap number in 2018 at $29,157,911 in free space left to re-sign impending free agents Trumaine Johnson, Connor Barwin, E.J. Gaines, Ethan Westbrooks, Dominique Easley, LaMarcus Joyner, Cody Davis, Nickell Robey-Coleman among others and of course an extension for Aaron Donald.

The hope is that the Rams extend Aaron Donald, Alec Ogletree and LaMarcus Joyner long term before any of them have the title of free agent next to their name. It’s safe to say judging by this projected deal, Ogletree would be getting a nice payday, but with the amount of talent and overall leadership he brings to the table for the Rams. It almost seems like a bargain for the Rams inking a rising star as they move closer to their future stadium in Inglewood.