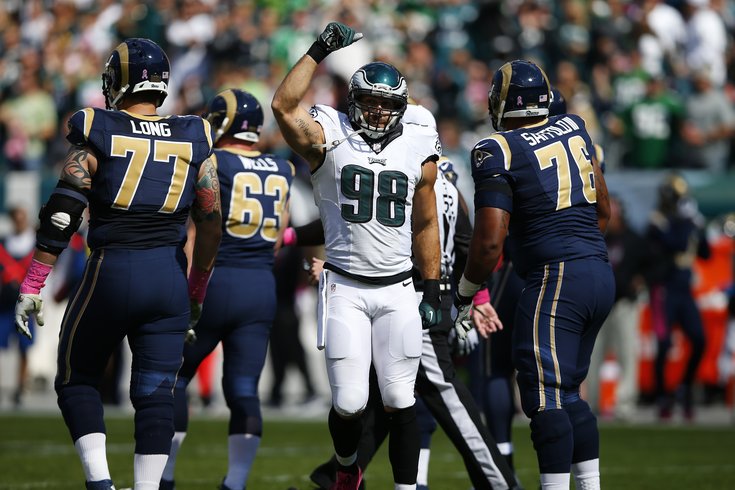 When it comes to the Los Angeles Rams’ offseason additions, the two that are continually mentioned are offensive tackle Andrew Whitworth and wide receiver Robert Woods.

However, one that does get forgotten about is Connor Barwin who fills a need at outside linebacker for the Rams and is a guy that has experience in Wade Phillips’ 3-4 defense.

Barwin had 14.5 sacks just three years ago and managed five last season playing an unnatural position in a 4-3 under Jim Schwartz with the Philadelphia Eagles. Barwin was released by his former team, but joined 97.5 The Fanatic in Philadelphia to talk about his time in Philly and about his new team in Los Angeles.

“I’m super stocked to be out there. I mean no one things we’re going to be any good. We’re a really young team. I’m an older guy on the team, which is a fun place for me to be in. I’m back with Wade Phillips playing in the 3-4 where I love to be. I felt so comfortable just being out there this summer in OTA’s and minicamp playing the position that fits my skills best. I’m excited about the season really because no one thinks we’re going to be any good and I think as a competitor that’s really got me excited about this training camp and about this season because I think we’re going to be pretty good. I think it’s the best all-around coaching staff I’ve ever been around in my entire career.”

Barwin: “I don’t know if you guys know these guys, but we got Joe Barry coaching the linebackers which is awesome, we’ve got Billy Johnson from New Orleans coaching the d-line. I mean these guys have been around the league coaching for a long time. They know Wade’s system, they know what he wants done. So I’m excited to be with these guys and see how they can help my career and how I can help this team get better. Then, you know this, that defense is already really talented. So I’m excited to join that group and see how good we can be as a whole.”

With someone like Barwin saying this on a Philadelphia radio station, a place he played a good amount of his career and has a connection with the community, is great to hear.

Barwin goes on to speak about Goff saying that “he looked good” which is interesting because he was with Wentz last year. The linebacker also says the Rams’ offense is comparable to what the Redskins ran last year which will make it tough for opposing def

The Rams have sold Barwin on their plan and what they want to do. Barwin is a full believer in the system and that has a lot to do with the coaches, especially Phillips.

For a team like the Rams, who have had Jeff Fisher the last five years. To bring in a guy like Barwin who believes in the system is very important and will wear off on the younger players and guys who haven’t played in the system before.