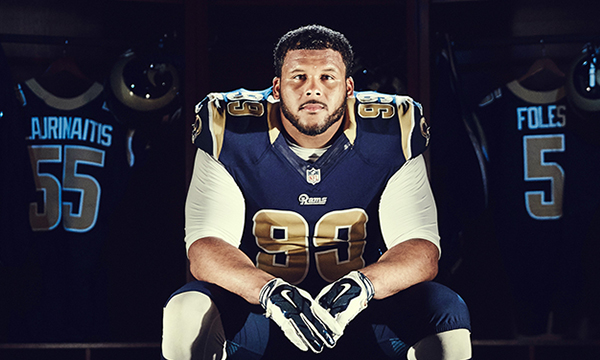 After holding out in OTA’s and then arriving to mandatory mini-camp, there was much debate as to whether or not Los Angeles Rams defensive tackle Aaron Donald would show up to training camp.

With the veteran reporting to camp on Friday and the check in deadline at 10am PT passed, it’s official, Aaron Donald is a holdout.

“I know his whole situation and to be honest, I’m not a business manager or agent or any of that. I leave that stuff alone, so that really has nothing to do with me. As our coach says, ‘It’s a fun game and a serious business.’ That’s just the business side of it.” (Quote via ESPN’s Alden Gonzalez)

The Rams defensive tackle is making just over $3.2-million this year after winning defensive rookie of the year his rookie season and having been in the running for defensive player of the year the last two seasons.

To say the least, Donald has outplayed his worth and feels like he is deserved more, and rightfully so. Donald has earned the top grades on ProFootballFocus and garnered many more remarkable stats.

However, looking at this from the front office perspective, Les Snead is right in trying to get the most out of Donald for as cheap as he can for as long as he can. It’s how the Seattle Seahawks were so good three years ago. They were paying Russell Wilson, Richard Sherman, and several others very small amounts and were able to spend on other parts of the roster.

With Donald, he’s going to command at least $25-million a year, which he is more than worth, however, it is much more than the $3-million that the Rams have now and Snead is simply trying to use the rookie wage scale to his advantage.

Donald will get paid. This isn’t a guy that the Rams are going to let walk. He will eventually show up to training camp. Right now, he is simply making a statement. The Rams don’t even take the field today. The team is scheduled to start practice on Saturday.

Snead knows how important it is to lock up a player like Donald. It’s not even a matter of if, but more a matter of when a contract does in fact get done.