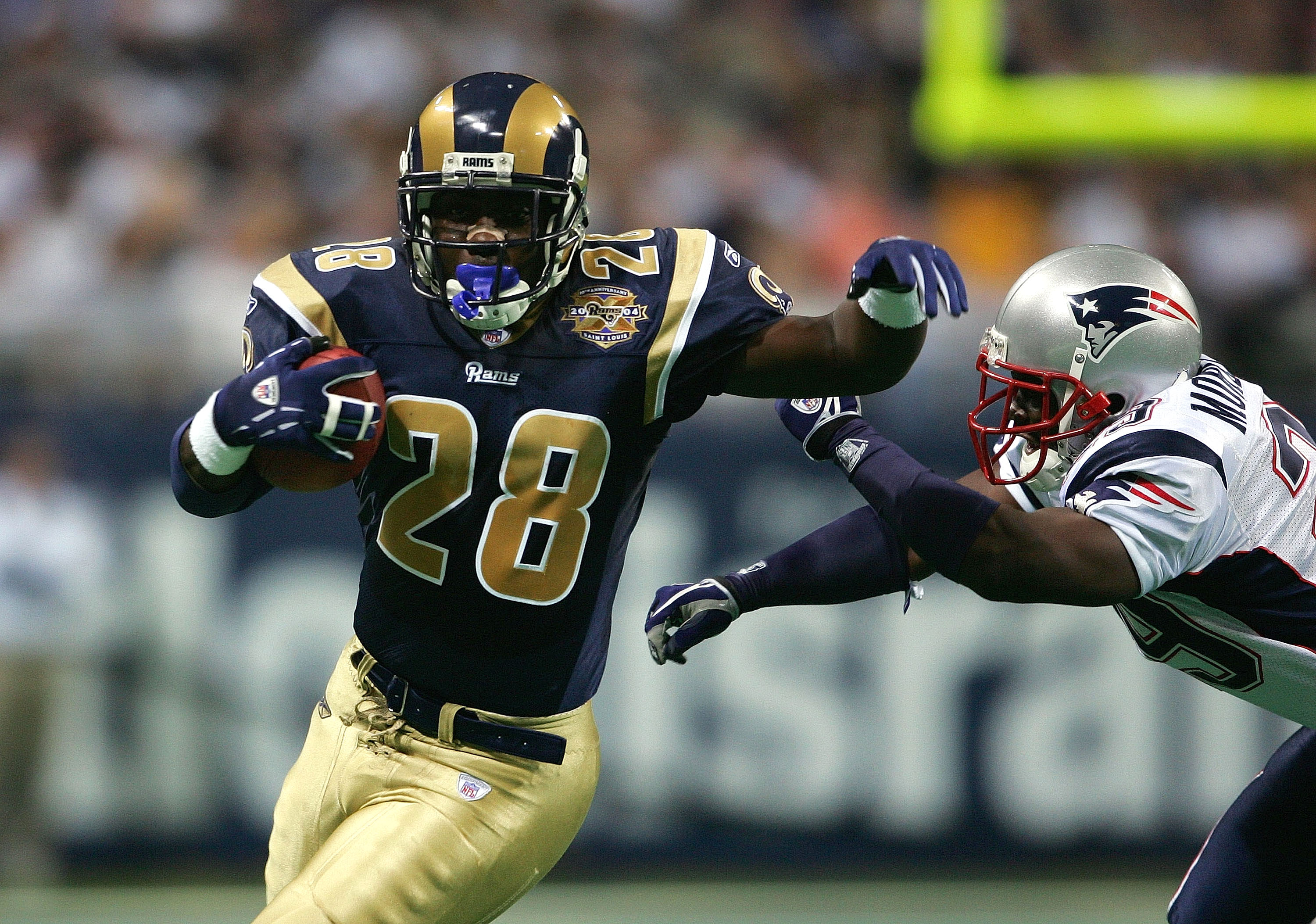 Have you ever pondered the question of who the greatest play makers of all time might be in NFL history? Bleacher Report apparently did and gave a prestigious list in ranking the top play makers of the NFL.

Marshall Faulk who is one of the greatest players to ever don the iconic horns with the Rams was listed as the number three player and that listing placed him ahead of the likes of Michael Vick, Thurman Thomas, Steve Young, Fran Tarkenton, Randall Cunningham, Lenny Moore and Red Grange among others. He also was the only Ram to be named to this list and he only fell behind legendary running backs Gale Sayers and Barry Sanders. That is what you call fantastic company.

Bleacher Report’s Mike Tanier had this to say with the placement of Faulk at No.3 on this list:

“There have been a handful of better open-field runners in history than Marshall Faulk. But no runner reached the open field as often or as consistently as Faulk.

Running room was hard for Faulk to find early in his career. He was fast, quick, decisive and steady as a rusher and receiver for the Colts. But the Jim Harbaugh-led offense was conservative, and toe injuries slowed Faulk as he carried the load in a plodding system. A year of good health with rookie Peyton Manning at quarterback in 1998 resulted in 2,227 yards from scrimmage and a hint of what Faulk could do if things opened up a little bit.

After a trade to St. Louis and a contract holdout, Faulk found the perfect offense for his talents. He became the engine for the Greatest Show on Turf. With opponents on their heels on play after play, forays into a stacked defense were rare. Faulk could work the perimeter on sweeps and the middle of the field on underneath routes.

Faulk gained over 1,000 rushing and receiving yards in 1999. He led the league in touchdowns in 2000 and 2001. He averaged no less than 5.3 yards per rush for three consecutive years, leading the league each year and supplementing the rushing production with over 80 receptions per season. Faulk wasn’t just the NFL’s best playmaker from 1999 through 2001. He was the best player, period.

Faulk would probably have been a Hall of Famer even if he remained stuck in grinding offenses for his whole career. But some performers are just too big for any ordinary stage. Only the Greatest Show was truly big enough to showcase the talents of Marshall Faulk.”

Without a doubt, Tanier in my humble opinion gets this right. Faulk is one of the most dangerous play makers anyone has seen play the game of football. It’s what he did in the passing game that sets him apart from the rest. Having over 2,000 yards from scrimmage in a single-season is just rare. However, having four straight years of 2,000 yards from scrimmage or more is just unheard of. Faulk is among the best at his position and in my honest opinion I might even argue he belongs at the top of this list. Although, it’s hard to argue against putting Barry Sanders and Gale Sayers ahead of him.

What do you think? Should Faulk be higher, lower or remain the same. Or even better, do you have a Rams player you feel belongs on the list? Let us know below!