A Friendly Reminder That Sean Mannion is a Backup Quarterback 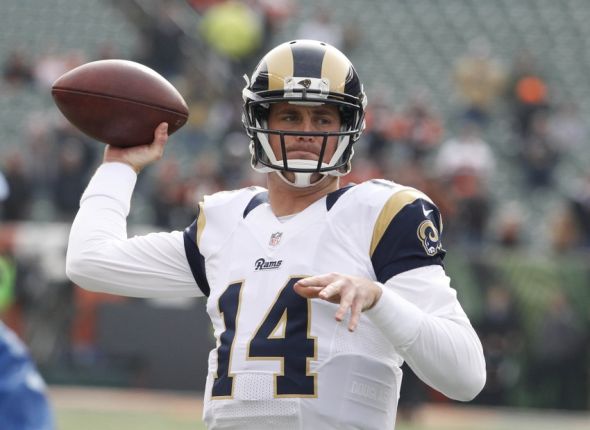 Do the Los Angeles Rams have a quarterback controversy on their hands? According to Rams’ great running back, Eric Dickerson, they do. Dickerson was quoted on The Herd late last week saying that he thinks Sean Mannion gives the Rams the best chance to win and not Jared Goff.

“The offense was terrible. The offense looked like a high school offense. My guy that I would start the season with would be Sean Mannion. I’ve been saying that since last year. Give him a shot.”

Dickerson as well as anybody should know that the offense had more to do with the scheme than the guy under center.

However, this has started a ‘Sean Mannion is the next Tom Brady’ train among a large group of Rams fans.

What potential are we seeing exactly?

Preseason tapes? Are we being serious?

Because college stats matter? Any idea who the all-time leader in passing yards is in college football history? That would be Case Keenum.

If Mannion was 100% outperforming Goff in camp, he’d be starting or would have some value on the trade market.

After Rams’ fans turning away the idea of possibly signing Kirk Cousins next year and are turning aside the former number one pick in the NFL for a guy that has thrown 13 career passes, this is just a friendly reminder that Sean Mannion is a backup quarterback.

The Mannion hype is based off of nothing relevant and is almost as ridiculous as getting excited over Nelson Spruce after one preseason game last year.

In last year’s preseason Mannion complete 39 passes (65%) for 325 yards to go with four touchdowns and an interception. If you want to say he outperformed Goff and Case Keenum, technically you’d be right, but once again, it was against third string players that were most likely cut a week later.

Now, that’s not to say he doesn’t have experience in the regular season, because he does. In his two year career, Mannion has thrown 13 total passes, seven of which came in garbage time against the Cincinnati Bengals in 2015 and the other six came against Arizona last season in garbage time. In case you forgot, here’s one of them:

Mannion managed to throw his first career touchdown and interception in the same play. As you can see, he locks on to the receiver and has decided where he wants to go with the ball before the play even begins. He can’t get the ball out of his hands fast enough.

A backup quarterback needs to be ready to play at any given moment, and if they aren’t preparing to do so, then they aren’t doing their jobs. To say Mannion isn’t preparing like the starter and that’s why he struggled is ridiculous.

The hype is based on preseason and going 9 of 13 in the regular season during garbage time. Not the tape that says he’s slow getting set, slow making reads, and has slow feet.

Mannion is a good backup quarterback and that’s all he is and ever will be for a team that wants to compete. Unfortunately, Dickerson and his crew of fans are wrong in calling Mannion a starter. The team has been hungry for a star quarterback for  long time, but Mannion just isn’t that guy.