Training camp is fast approaching and while we have an idea of who will be the starters heading into it, the Rams PR staff made our lives a little easier after releasing a projected starting depth chart today. 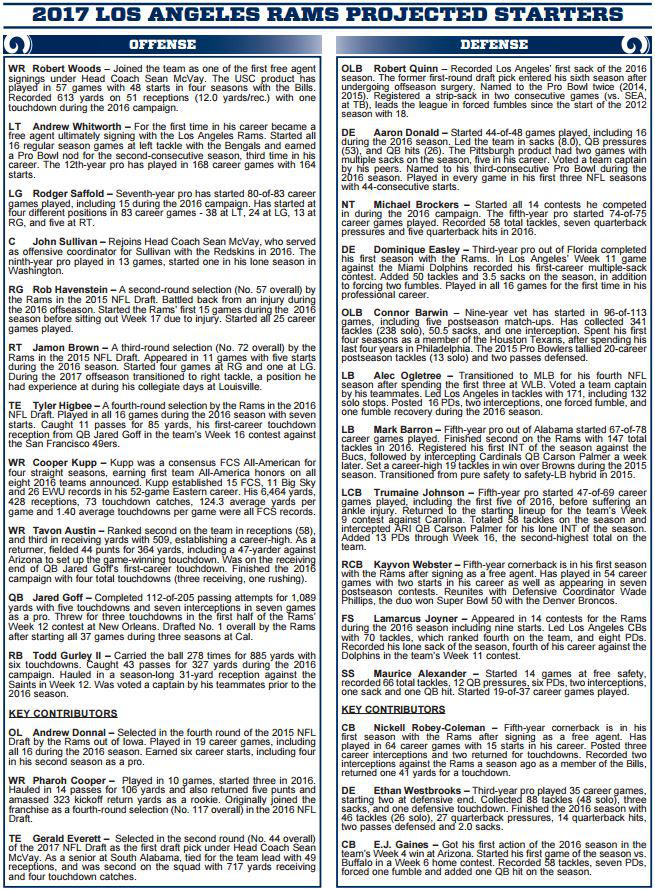 The depth chart starting on the offensive side of the ball is what many might have expected, but it should be used as confirmation that the Rams are serious about things such as Cooper Kupp starting at wide receiver, Rob Havenstein and Jamon Brown completely swapping their positions from last year. Here is the look of the offense:

Now looking at the defense, again, it’s pretty much what you would expect.

The most exciting part of this has to be the players they listed as key contributors. Pharoh Cooper, E.J. Gaines, Ethan Westbrooks and Andrew Donnal are ones that jump out. Cooper for many has been the forgotten man, but perhaps he has a bigger role in store than many believe. Gaines could be considered in that same type of situation, but again, like Cooper. Gaines is probably going to have a bigger role than many believed. With Westbrooks, after that shaky situation with the alleged domestic violence this off-season, it seemed as though his roster spot seemed very uncertain. It appears if this is any indication to anything, Westbrooks clearly was held onto becausse he has a role with this team. As for Donnal, he likely is going to be the “sixth man” of the offensive line which is exactly what he should be.

Yes, this is not the official and it’s not the final starting lineups, but it’s at least something to get the fans and media talking about as we head into training camp.