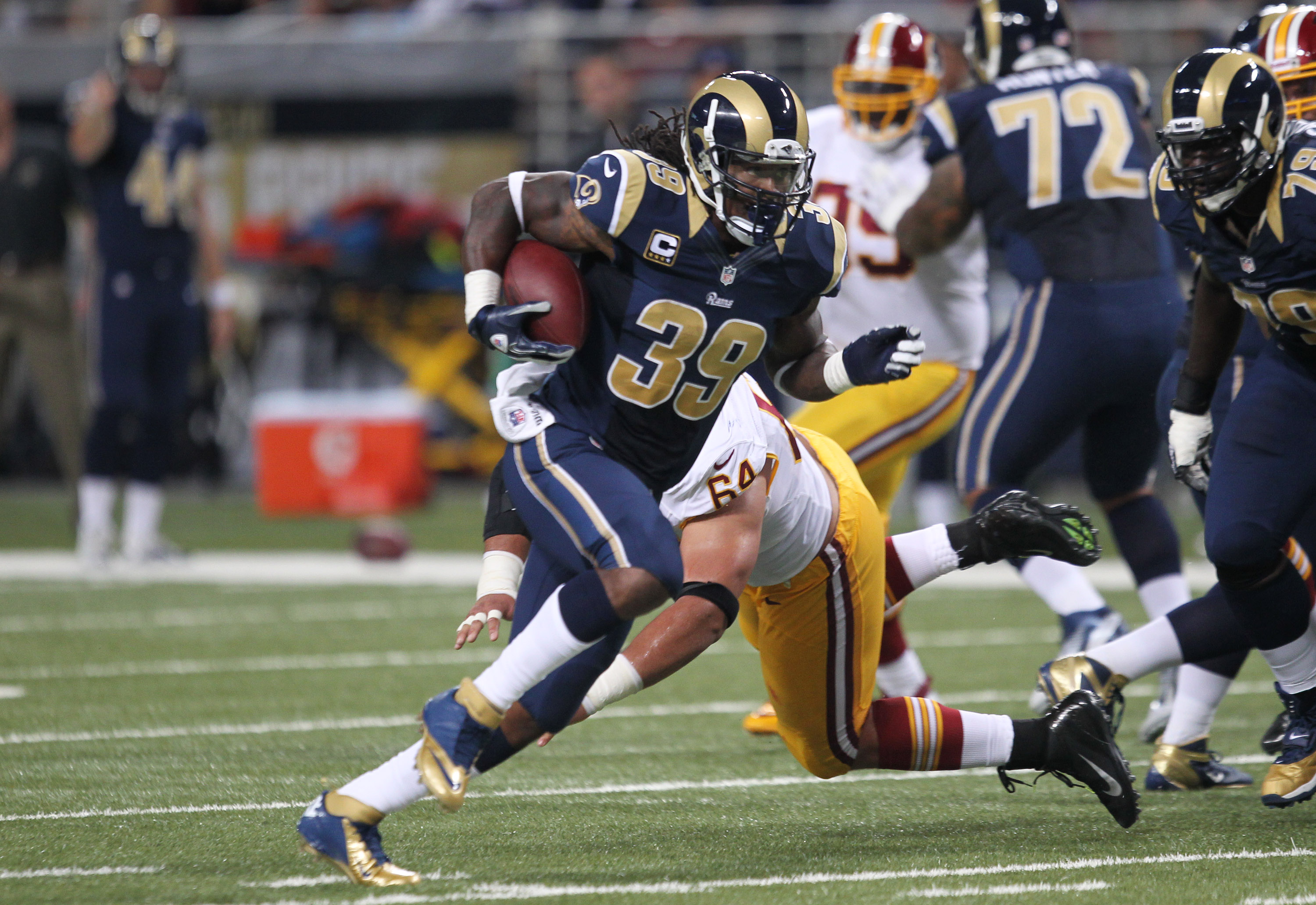 It’s a surefire thing now that the running back position has emerged back into the spotlight as a premier position. Bucky Brooks of the NFL Network is a renown scout and has been over the last 20 years. So he put together a top 10 of the best running backs he had ever scouted and it just so happens that the Rams running backs Todd Gurley and Steven Jackson made the list.

Brooks ranked the running backs and even though many have called Todd Gurley one of the best RB prospects ever, it appears as though Brooks felt as though the former Rams star RB Steven Jackson was more eye-opening. In the article which you can find here. Brooks listed the running backs in order: Reggie Bush, Marshawn Lynch, LaDainian Tomlinson, Ezekiel Elliott, Adrian Peterson, Willis McGahee, Steven Jackson, Darren McFadden, Larry Johnson and Todd Gurley as his top 10.

Here is what Brooks had to say about Rams legend Steven Jackson at No.7:

“It’s hard to find a big running back with nimble feet, exceptional balance and explosive power, but scouts venturing through Oregon State in 2001-2003 stumbled upon a future Pro Bowl selectee in Jackson.

The 6-foot-1, 231-pound sledgehammer quickly became one of the favorites on the scouting trail after rushing for 1,500-plus yards in each of his final two seasons. With Jackson also totaling 46 career touchdowns (39 rushing; seven receiving) while displaying soft hands and polished receiving skills (66 catches for 680 receiving yards) as a big back, it was easy to envision him blossoming into an RB1 in a scheme that showcased the talents of a dynamic runner-receiver in the backfield.

As a pro, Jackson thrived as the feature back in a St. Louis Rams offense that fully utilized his skills as a runner between the tackles and as a pass-catcher on the perimeter. He led the NFL in scrimmage yards in his second season as a full-time starter (2,334 yards in 2006) and posted eight straight 1,000-yard seasons as the Rams’ RB1. Not bad for a running back who started off his career as an RB2 to Marshall Faulk in St. Louis.”

Then Brooks had this to say about the hopeful face of the Los Angeles Rams offense Todd Gurley at No.10:

“Despite missing four games due to a suspension for violating NCAA rules and suffering a season-ending knee injury during his junior season, Gurley was a blue-chip running back prospect due to his remarkable combination of size, speed and power. The All-SEC RB rushed for more than 3,200 yards in 30 games while exhibiting outstanding balance, body control, and vision. In addition, he dazzled scouts with his explosive athleticism when he clocked the seventh-fastest time in school history in the 60-meter hurdles as a sophomore.

Given his unique movement skills and overall explosiveness, it’s no surprise that Gurley hit the ground running as a rookie with 1,106 rushing yards and 10 touchdowns on the way to earning a Pro Bowl berth. Although he hasn’t surpassed the 100-yard mark in 24 straight games, Gurley remains a talented runner with the kind of star power that coaches love to build around.”

Regardless of what happens this list is full of huge names and not one of them is Melvin Gordon, Leonard Fournette, LeVeon Bell, David Johnson or even Derrick Henry. Once again, this is a slight wake up call that Todd Gurley still exists for the L.A. Rams and could be in for a great career just like the rest of this list. I think if I had to do a list of a top 10 best RB’s I have “scouted” it obviously wouldn’t be as wide open as Brooks’. It would look something like this:

What’s your thoughts on Bucky Brooks’ rankings and what is your top 10 RB’s you have “scouted”? Let us know!