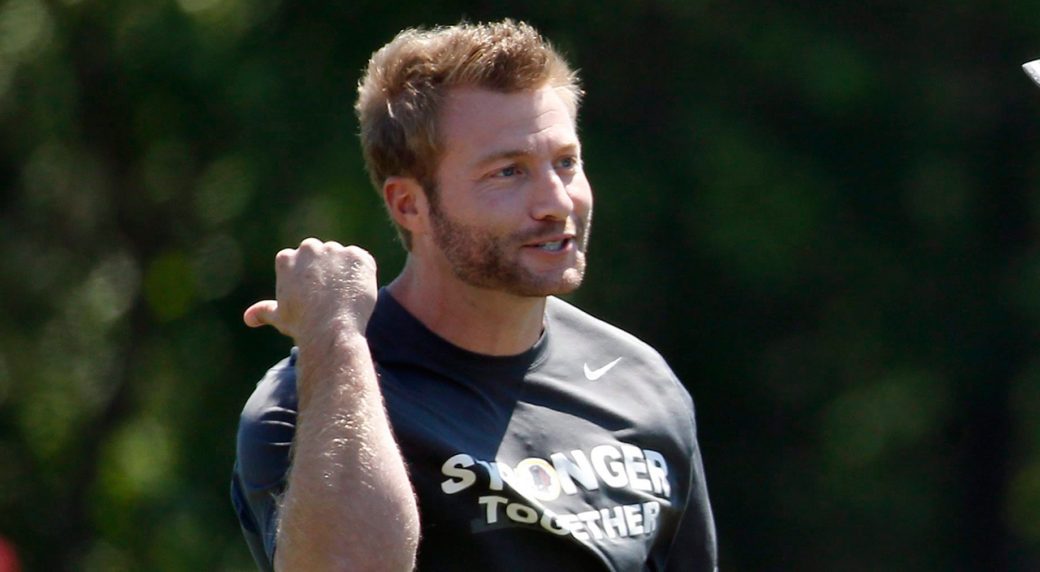 When a new head coach takes over a football team, it is expected that they will make changes. From coaching staff to roster, changes are going to happen. With new Los Angeles Rams head coach Sean McVay, that has already been the case with the coaching staff. However, with cuts coming in a little over a month and a half, that will also be the case when it comes to the roster.

You could make the argument that has been the case already with cuts to Marquez North and Brian Randolph as well as the trade of Greg Robinson. They won’t be the last.

Not a lot of change here, but with Bradford in place, Fisher already had his quarterback he was going to build his team around. They then had a veteran guy in Kellen Clemens and a developmental player in Austin Davis.

A lot of changeover at running back. The Rams drafted Pead and Richardson. The hope was for Pead to take over as the guy after Jackson left. Clearly that never happened. However that’s 3/4 new players at one position.

It should be noted that Amendola was on the 2011 roster, but on the IR. The same can be said about Pettis. However, Quick and Givens were two rookies that the Rams drafted in hopes to give Bradford weapons and Steve Smith hoped to be that veteran guy. That’s three new receivers which is nearly 50% changeover.

The Rams let go of Michael Hoomanawanui who built a rapport with Bradford and rolled with Kendricks and Harkey as their top tight ends.

It should be noted that Saffold was on IR in 2011 and Jason Smith was as well but was traded in early 2012 before being traded to the Jets for Wayne Hunter. Harvey Dahl was also put on IR but was on the 2012 roster. However, Barnes, Barksdale, Smith, and Wells were all key additions to rebuild what was a very bad Rams offensive line. The final eight offensive lineman on the active 2011 roster did not make the active 2012 roster.

The corps of the Rams’ defensive line was basically in place, however, Fisher in year one took what Spags had built and brought it to the next level. By drafting Brockers and bringing in Hayes and Lanford, the Rams had the makings of a ferocious unit. Seeing guys like James Hall go was disappointing, but Fisher put his mark on his team right here on the defense in the trenches.

The Rams linebacker situation wasn’t ever ideal. However, Jo-Lonn Dunbar gave the Rams a stop gap and was a steal in free agency.

Overall, there was a lot of changeover in the secondary, and for good reason, the Rams’ secondary wasn’t good in 2011. It should be noted that Fletcher was on IR in what was a very injury plagued 2011. In 2012 Fisher brough in Finnegan from Tennessee as well as drafted guys like Janoris Jenkins and Trumaine Johnson who were going to be the future at the position. Rodney McLeod also turned into a pretty good safety for going undrafted. On the 2012 roster, six of the nine defensive backs were new.

The Rams made significant turnover on special teams as they drafted Zuerlein and signed Hekker. McQuaid surprisingly is still on the roster.

It should be noted that in 2011, both Tim Barnes and Chase Reynolds were on the practice squad. Both guys played significant roles on the Fisher teams.

While this may have been a little on the extreme, the point is, with a new coach, there is going to be turnover. Sean McVay is going to want to bring in his own guys. We’ve already seen it. The Rams didn’t re-sign Kenny Britt or Brian Quick, the team’s top two receivers last season as well as trading Greg Robinson. This is only the beginning.

Sean McVay is going to put his image on the Rams, and by implementing the “We Not Me” mindset, he’s already done that. Anybody that doesn’t fit that culture, will be gone.

What options do the Rams have at their disposal with Trumaine Johnson?