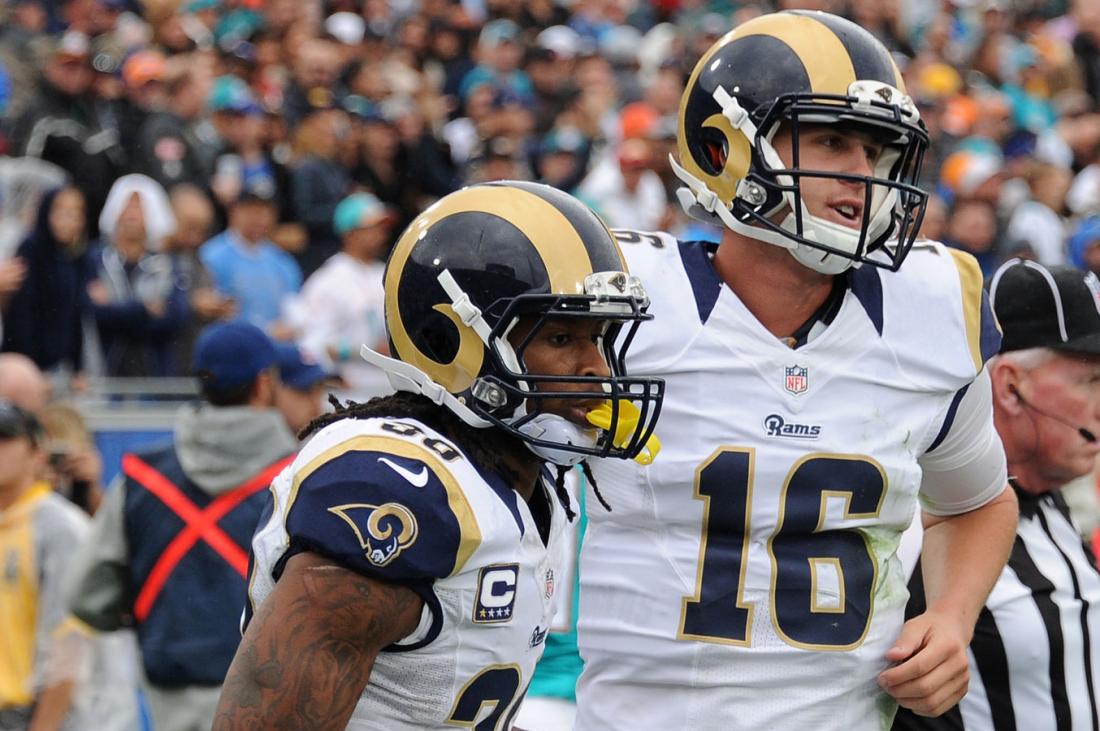 It’s always interesting when the Rams who went 4-12 last season are mentioned by national media, due to the fact that there is so much uncertainty and unpredictability. The Rams caught some more national light when Jared Goff became the topic of discussion during Eric Davis and Colin Cowherd’s segment on Dak Prescott during The Herd on Fox Sports 1. Which you can watch below. The segment with the Rams starts around the 8 minute and 37 second mark. 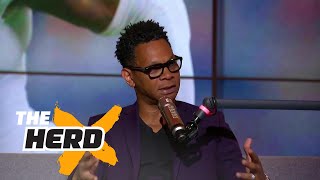 After discussing in minimal detail about the NFL Network’s NFL 100 list and young QB Prescott, Cowherd changed the subject to another young QB who didn’t have the early success Prescott had in Jared Goff.

“Let’s now go to a rookie quarterback who struggled, Jared Goff. He now has a dependable left tackle, he Robert Woods and a wide receiver from Eastern Washington who they are saying has been the surprise of camp. He does appear to have a better receiving core, a legitimate left tackle and a coaching staff that’s expertise is on the offensive side of the ball. While still maintaining good defensive personnel and top punter in the league.” Cowherd then responded asking Davis a question. “What do you think Jared Goff will look like this year?”

Davis on what Jared Goff will look like this year:

“Uh again, I think he will take some steps forward. The reason they drafted him is because, and I know this first-hand because Stan Kroenke told me the reason. I asked him “Why this guy?” and he said he liked the fact that he could get the ball in the end zone. Which, that’s what it’s all about. Which is what this whole list (NFL 100) is about, taking it away and being able to score. He liked the fact that Jared Goff was good in the red zone. That he could throw the ball in tight windows. Now, the issue with the Rams was that they never got down there, they never had a chance to do that. So, having a dependable receiver like (Robert) Woods, uh, yes I think the offensive line could be better. How much better is Todd Gurley going to be? I think the issue with Todd Gurley is understanding how to be a pro. He needs to understand how to run. Where is the free hitter? Where is the danger coming from? That’s what I think Todd Gurley is still trying to figure out. And that’s what the good running backs in the league understand. It’s not just “Okay, there’s a hole there”. You know if the guys in front of you do their job there’s going to be a hole. But, there’s a free guy coming in, how do you set that up? LeVeon Bell is better than anyone at that, understanding how to take away the unblocked guy. So, he has to learn how to make people miss, all of those things will help with the development of Jared Goff. I think he will definitely improve on what he’s done just by being out there. But, he has a little bit farther to go than some of these guys.”

Cowherd on the Rams potential 2017 success:

“I think the Cowboys record and the Rams record is going to be closer than people think. The Rams had four wins, the Cowboys had 14. I think Dallas is 9 and 7 and I think the Rams become 8 and 8”.

Davis then responded with own take on the Rams.

“Can I tell you something? And it’s going to sound crazy. I said this off air to someone that depending on which team can sweep the other, with the possibility of sweeping the other. The 49ers or the Rams, can actually win 10 games.” Cowherd responded “I believe the Rams will, I think they’ll get really close. This team won four games last year and could not move the football. At all. They have now an expertise on offense, upgrades at left tackle, quarterback, wide receiver and more than anything, coaching. I tell ya, it’s really funny to say this out loud. Dallas and Rams will be reasonably close in record.” Davis added “If you look at their schedules, there’s a shot and the other thing about it. Regardless of what you think about Goff, no one talent-less gets drafted number one overall. There’s some talent there, the guy can be a bust, but he has talent. That’s the thing, he has some talent, so a few things going right here and there and they could actually be in the mix.”

My thoughts on this go hand in hand. I am normally the optimistic fan, but I truly think Cowherd and Davis really know what they are talking about. Cowherd does not go on the air and throw praise at random teams (that’s for sure) so I would be a little excited as a Rams fan listening to this. Basically, my takeaway is this, I know plenty about my favorite team and so I don’t really learn much when other media analysts or sports casters talk about the Rams in general. However, I do like getting a national media member’s ideas and opinions out on the Rams. I will say, I love The Herd, I listen to it for three hours while I work my day job. To hear Cowherd and Davis talk about the Rams for nears three minutes and to hear it all sound pretty positive. That leaves you in general with a good feeling. Now, there is plenty of things that are left for the Rams to prove, but national media recognition is worth noting and while many may be surprised if the Rams have a breakthrough season. Cowherd, Davis and I will not be in that group of people.

What are your thoughts Rams fans? Are they right? Are the Rams in for a 10 win season? Let us know!