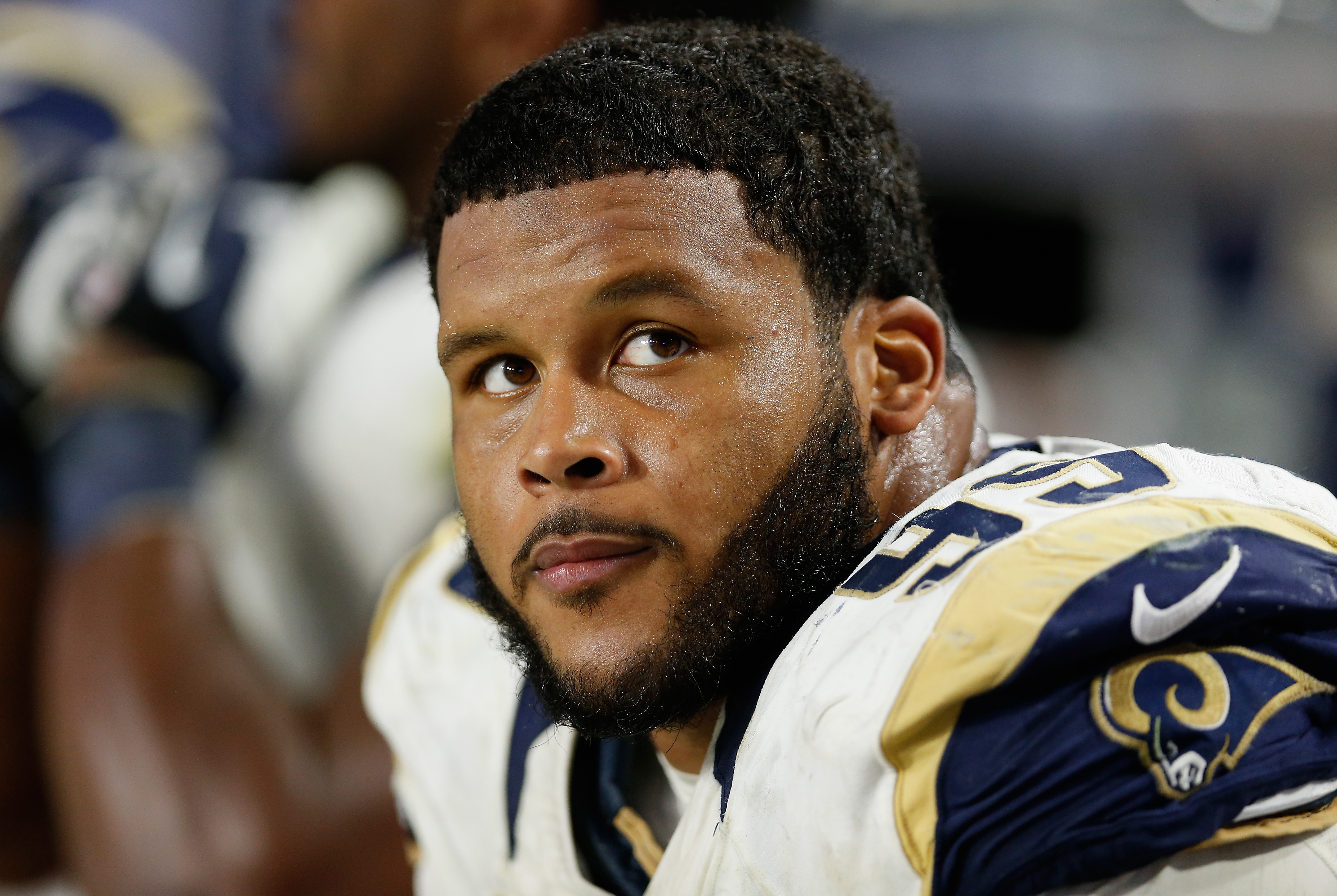 Aaron Donald is without a doubt one of the most talented players in today’s NFL. When news first broke about Donald missing voluntary workouts, headlines of a hold out quickly followed.

While we can’t exactly call the situation a hold out at this point, Los Angeles Rams fans have been holding their breathe while not-so-patiently waiting to hear the latest information regarding a potential new contract for the super star defensive lineman.

Many factors will go into what a new deal will look like for Donald, but some things that we do know could help us project how many millions Donald will make over how many years.

Comparing similar players is typically one of the first steps for fans to predict a deal.

Between these four, Donald matches up closely on multiple stat lines. The four named above average .48 sacks a game compared to Donald’s .59 with Gerald McCoy pushing that average up with a .6.

Donald averages 2.5 solo tackles per game while the other four average 2.23 with Marcell Dareus leading the pack with 2.58.

As a defensive lineman, stops are always an important statistic as Donald averages 2.81 per game while the others average 2.14 combined.

Getting to the quarterback has been an Aaron Donald trademark with 2.94 hurries per game to just 2.31 for the other 4 combined.

With Donald’s statistics comparing so closely, and usually above high dollar defensive lineman, we can guess that Donald will likely be the highest paid in this group. Short, Jackson, Dareus, and McCoy average $15.5 million per season under their current contracts. Spotrac.com currently has Aaron Donald’s market value at $18.3 million per season. A big jump from what his current deal is which will pay him $3,225,250 in 2017 and with the 5th-year option picked up by the Rams, $6.89 million in 2018.

Under his projected market value, the predicted contract for Aaron Donald would be 6-years $109.9 million. This would not make him the highest paid defensive player in the NFL, however. That title still belongs to Denver Broncos linebacker Von Miller who is playing under a 6-year $114.5 million deal.

Many believe that Donald will surpass Miller when a new deal is agreed upon, which isn’t far fetched considering NFL teams seem to one up each other every year on mega deals for super stars.

It’s also noteworthy to mention that Aaron Donald is represented by CAA Sports and has been working with super agent Todd France.

For those unfamiliar with France and CAA Sports, France joined forces with CAA Sports to become one of (if not the) most powerful sports agencies in the country representing multiple Pro Bowl players who are playing under what we now call “mega deals”.

Todd France is responsible for making Carolina Panthers linebacker Luke Kuechly the highest paid inside linebacker in the NFL, as well as making Buffalo Bills defensive tackle Marcell Dareus the second highest paid player at his position with a whopping 6-year $96.5 million deal with $60 million guaranteed.

Comparing now to the deals of J.J. Watt and Ndamukong Suh, it would appear as if Donald will surpass each of their deals making him one of the $100 million+ earners in the NFL.

While the Rams are projected to have just under $4 million in cap space after cuts take place, there is still not a lot of wiggle room in terms of paying Aaron Donald what he is asking for in 2017, which could lead to a back loaded contact. A back loaded contact is simply when the majority of the money to be paid out is pushed back onto later years of the deal to create more flexibility near the beginning of the deal. A back loaded contract, while helping the Rams in 2017, would create a “that’s future Les Sneads problem” situation.

As mentioned, Aaron Donald is still under contract for the next two seasons in Los Angeles. Which does give the Rams front office a slight advantage as far as negotiations are concerned.

Rams GM Les Snead has also had a knack for selling the incentive laden contracts to players. Offensive lineman Roger Saffold is currently playing under a deal with incentives that pays him only if he plays and does not pay him if he is injured and cannot be on the field.

Missing time has not been an issue with Donald as he has not missed a game in his 3-year career.

Putting all of these puzzle pieces together and factoring in the natural inflation the league has seen in recent years, Aaron Donald’s new contact could still turn some heads. I’m expecting Aaron Donald to not only become the highest paid defensive player in the NFL, but to pass it by a fair margin. It is likely that Donald could only be the highest paid defensive player in the league for one or two seasons as stars such as Khalil Mack near the end of their rookie deals as well.

Aaron Donald entered the league just a few short seasons ago. He has since become one of the most disruptive forces in the league. Even in just three seasons, Aaron Donald has shown that even when game planned against, he can still produce and has earned the privilege of being one of the highest paid player in the National Football League.