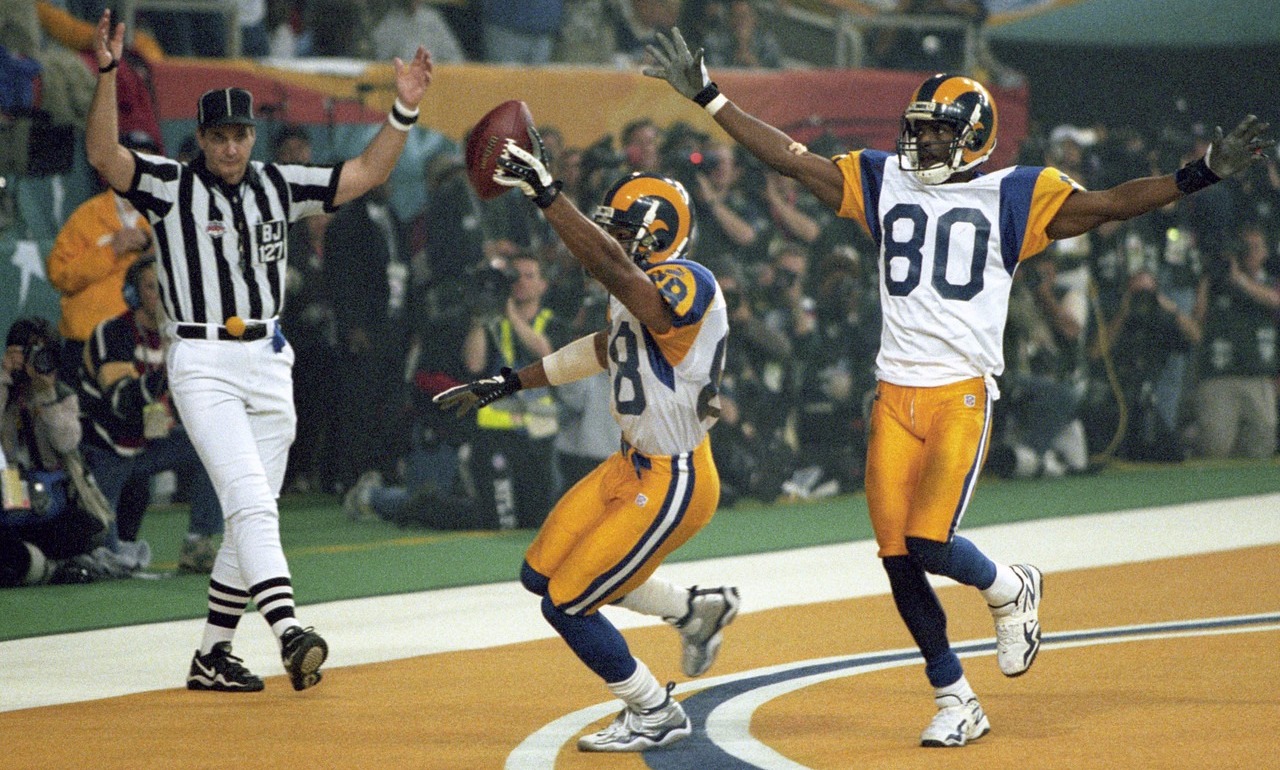 In this renewed series Jake gives you a complete all-time Rams roster going through each position. It’s now time for the wide receiver position, there will be two starters (since we have to go split-back formation with RB and won’t start 3 WR’s), four backups, and two honorable mentions. 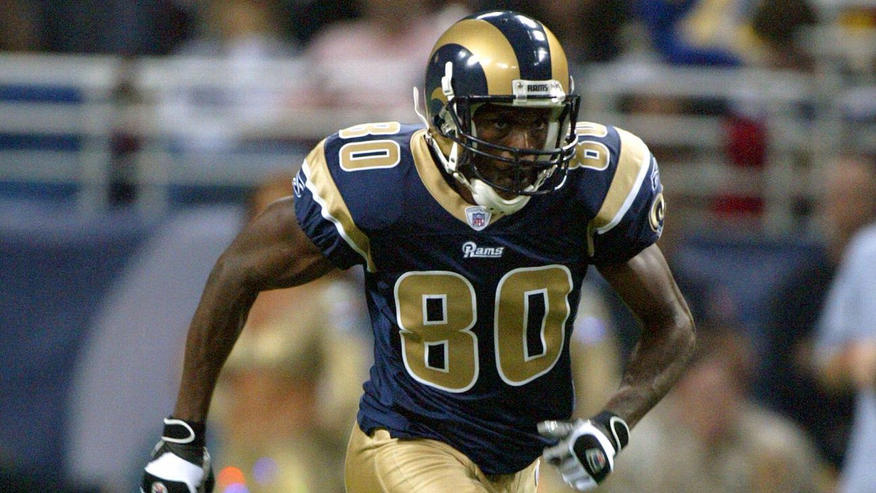 The all-time Rams leader in receiving yards. The reverend Ike dominated the competition alongside Torry Holt during the greatest show on turf.  Bruce, has great as he was, has often times been overlooked and underrated. He is still waiting to get the call to Canton and he is considered a tad below Holt on the all-time Rams WR by many. I believe Bruce is the Rams greatest overall receiver.

He leads all Rams wide receivers all-time in receiving yards, receiving touchdowns, but what is more impressive is that he is third all-time in games played for a Ram. Why is he so overlooked? When you look at his accolades and his career results, right off the bat you notice dominance, consistency and lack of recognition. Bruce was only a four-time Pro Bowler. Most guys in the league would take that in a heartbeat, but it was clear that Bruce was overlooked and should have been a Pro Bowler on four other occasions.

One of the biggest things often used against Bruce is the fact he was part of the Greatest Show on Turf, but if you look at his play before Warner and company came along with lesser talent it’s easy to tell Bruce was transcendent. Bruce had the single-season receiving yards record at one point until Jerry Rice broke that in the last week of the season. Regardless of what anyone says, Bruce in my opinion is the most overrated receiver in NFL history, he should be a Hall of Famer by now and is my go-to WR on this team hands down. 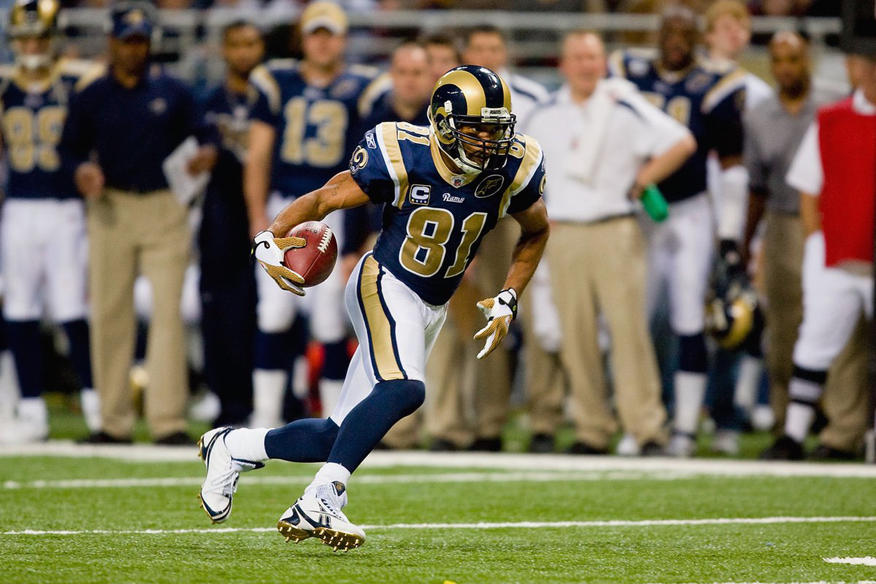 “Big Game” Torry Holt had a shorter career than Isaac Bruce, but man, was it consistent. Holt racked up eight seasons out of ten with the Rams in which he had 1,000 yards or more. In two of those seasons he had 100-plus receptions. Holt was known for his big-play ability and a player was part of something special his rookie year and only proved to be an outstanding receiver as time went on.

Holt is the more appreciated receiver out of him and Bruce by the fans around the NFL. It’s no doubt he was flashier and seemed to be the more noticed receiver which was shown as he ended up with seven Pro Bowls and an All-Pro to his credit. It goes back to his rookie year, Holt was absolutely un-phased by the amount of spotlight and he showed that with his 20 receptions for 242 yards in the playoffs and a touchdown in the Super Bowl.

Holt is a player I firmly believe is a Hall of Famer, but I also believe Bruce should get in at least with him or before him. There is no doubt the voting for the Hall is filled with voters who don’t respect the wide receiver position which is only way to understand how it has kept two prolific receivers out of Canton. Regardless, just like during the Greatest Show on Turf days, I am electing to have Bruce and Holt as my starting wide receivers. 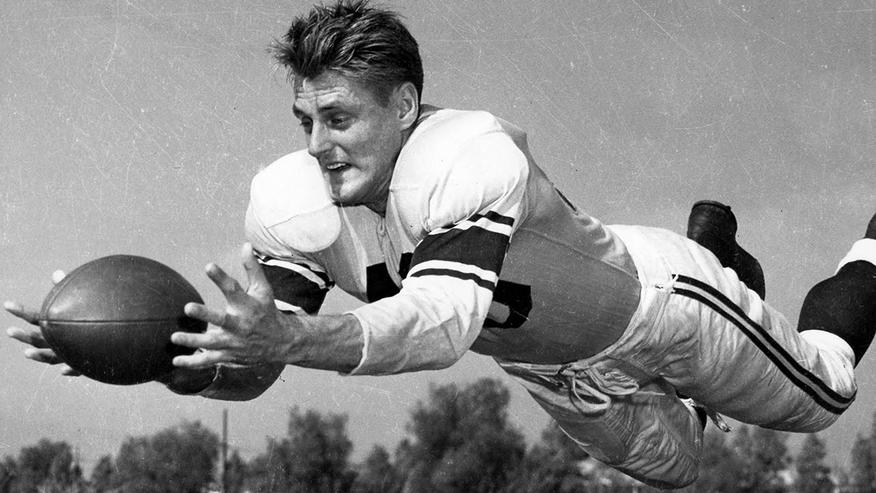 The marvel “Crazy Legs” was ahead of his time as one of the most dynamic receivers of the 1950’s. Elroy Hirsch started off his career slow with the Chicago Rockets due to injuries, but was released and then decided to sign with the Rams. Although he may have continued his slow start, things eventually clicked for Hirsch his second season with 42 receptions for 687 yards and seven touchdowns. It only got better for Hirsch in 1951, he won a championship with Hal of Famers Norm Van Brocklin, Bob Waterfield and Tom Fears. (There is actually a really cool film called “Crazlegs” from 1953 you can check out here if you want to learn more and watch more on him and the 50’s Rams.)

He also happened to have one of the most statistically dominant seasons in the history of the league. In that season his 66 receptions, 1,495 yards and 17 touchdowns shattered team records and even NFL records. He set an NFL receiving yards record, an NFL yards per game average record which only two dating up to now have passed him in, he tied Don Hutson’s touchdown record which has only since been passed by four players up to the present day and setting team records (later broken) for receiving yards and touchdowns in a single-season. More impressive? All of this was done in a time when the NFL season was just 12 games long.

The Hall of Famer went on to be the Rams General manager who was responsible for drafting Rams legends Deacon Jones, Merlin Olsen and Roman Gabriel. He eventually went back to his old college Wisconsin to become the athletic director. There is no doubt Hirsch would be my slot receiver on this team and would add another dynamic weapon for Warner. 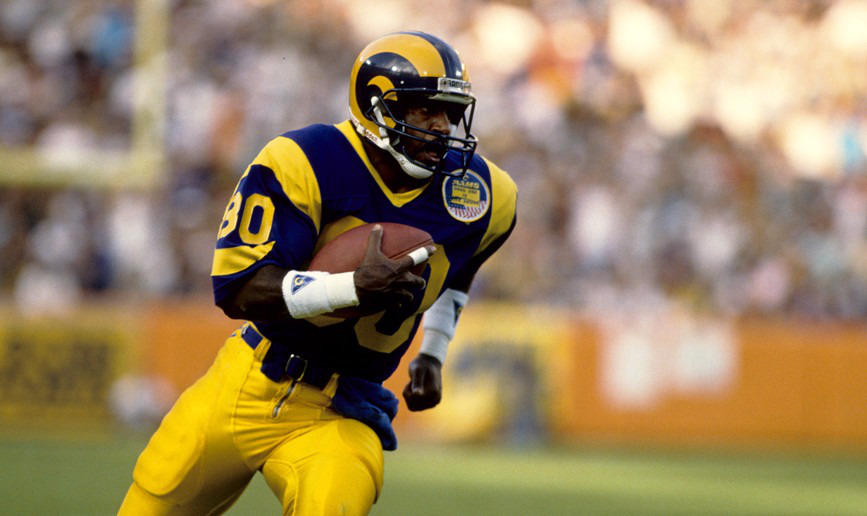 The original number 80 before there was Isaac Bruce. Henry Ellard was a spectacular receiver for the Rams for 11 seasons. Although, unlike Holt and Bruce it took Ellard until his prime for the light to really come on, but when it did it was a thing of beauty. He had four straight seasons from age 27 through age 30 in which he had 1,000 yards or more. Ellard was dynamic as a receiver and a return man early on in his career.

Ellard is a player that is more respected by past legends of the game. His days at Fresno State were astonishing and his average of 24.4 yards per catch is still an NCAA record to this day. When Ellard retired from the game he held Rams records in receptions and yards for a career. That was of course until Holt and Bruce came into the picture. 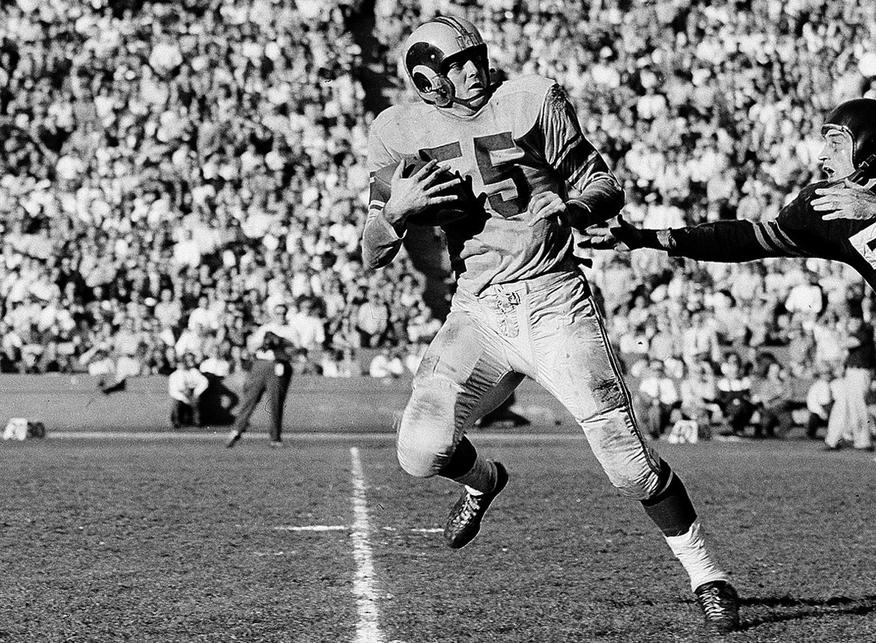 The other part of the Rams 1950’s passing attack outside of Hirsch was Hall of Famer Tom Fears. Fears, in his first three NFL seasons led the league in receptions and broke the single-season record with 77 of them. He then turned around and broke his own record by tallying 84 the next season. Fears started at the age of 26 and his career ended abruptly eight years later with a fractured vertebrae.

Fears is known for his big 6-foot-2 and 200-plus pound frame he used to bully and boxout defensive backs. He used that size to his advantage many times, but most importantly he used it to catch the game-winning touchdown to win the Rams their first NFL Championship in Los Angeles.

Warner would have another dynamic weapon to come off the bench in the form of Tom Fears. He had set the single-game receptions record back in 1950 with 18 and stood until 2000 when Terrell Owens broke it. Putting Fears on this team would seemingly be a no-brainer. 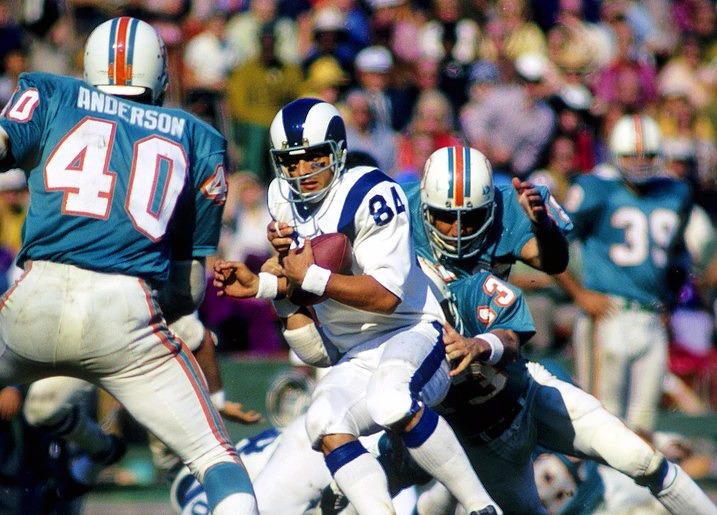 Jack Snow was a first round pick by the Minnesota Vikings who made the mistake of trading him away to the Rams. Snow was a big-play threat every time he was split out wide. He never quite had those mind-blowing type of 1,000 yards and 10 touchown type of seasons, but he offered tons of yards per catch. For instance, in 1967 he averaged 26.3 yard per catch in his first and only Pro Bowl season. He was a huge deep for QB Roman Gabriel.

Snow was drafted by the Chargers in the AFL and the Vikings in the NFL, but he only would be known for playing with one team and that was the Los Angeles Rams. Snow retired as second in team history for yards and touchdowns only behind Elroy Hirsch at the time and third in receptions. He still remains in top five in franchise history in receiving touchdowns and receiving yards 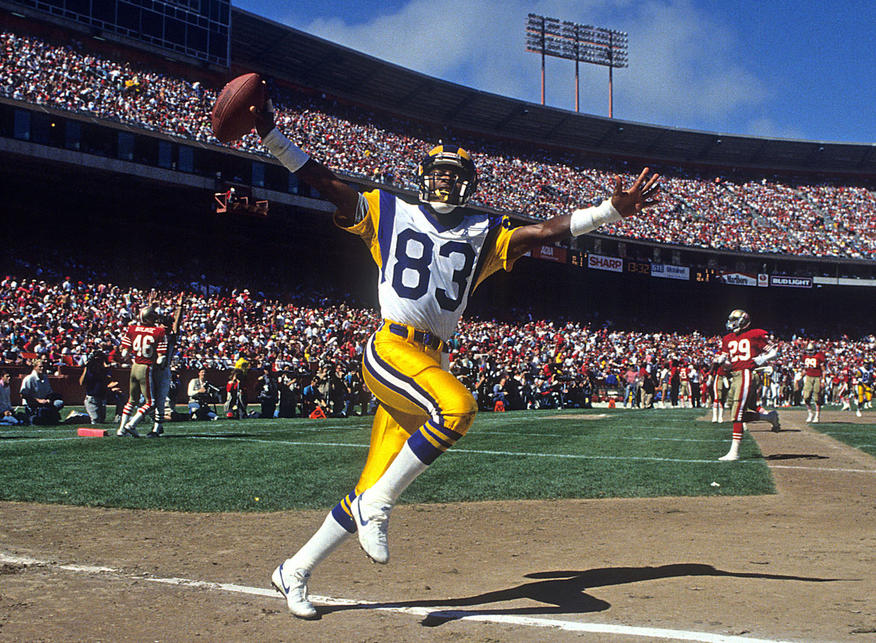 Willie Anderson was a fan favorite and definitely was liked among the Los Angeles fans who loved him at UCLA. Anderson had two seasons in which he eclipsed 1,00 yards receiving and during his time with the Rams he account for 5,246 receiving yards on 259 receptions and 26 receiving touchdowns.

He is most-known for his insane game that has stood the test of time in which he caught 15 passes for the NFL single-game record 336 yards during the 1989 NFL season. Still, to this day, even with players like Calvin Johnson, Julio Jones, Odell Beckham Jr. and Antonio Brown, that record still remains intact. 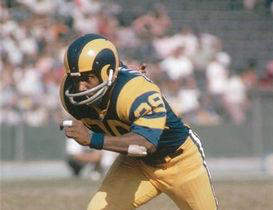 The Rams drafted Harold Jackson out of Jackson State in the 1983 draft only 323rd overall. They ended up trading him to the Eagles in which he turned into one of the top receivers in football. Ironically enough, the same team that traded him away, traded for him. The Rams traded Roman Gabriel for Jackson and Jackson ended up making an instant impact with the Rams.

Jackson finished his six years with the Rams with a total of 200 receptions, 3,591 yards, 18 yards per receptions and 36 touchdowns. He ended up being a great receiver as a whole and to this day people continue to debate if he should in fact, be in the Hall of Fame or not.

What are your thoughts Rams fans? Are you okay with this position group? Let me know! Be sure to stay tuned for the next article in this series when we give our tight end group.