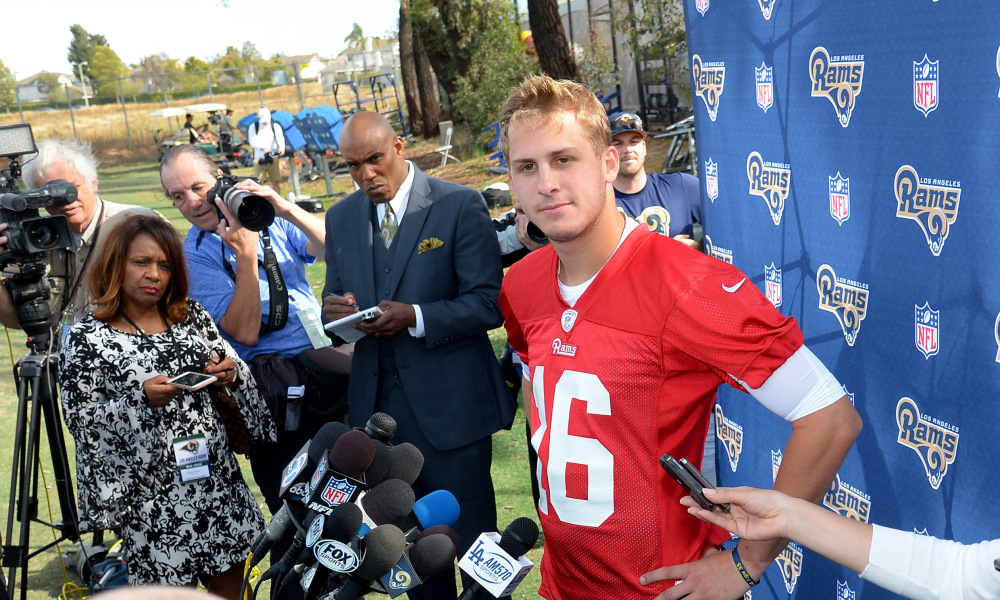 In last year’s draft, the Los Angeles Rams did something that went against the grain of many of their fans, they traded a plethora of draft picks to move up to the number one overall pick in order to presumably select a quarterback.

The two options? Jared Goff and Carson Wentz. Some liked the quarterback from Cal over the quarterback from the small school in North Dakota and other visa versa. At season’s end however, it looked like Wentz would be the one to have a better NFL career after Goff’s disastrous rookie campaign.

At the end of their rookie campaigns it looked as if Wentz should have been the first quarterback taken and not Goff. After season two, Bleacher Report’s Matt Miller expects that to change. Here’s what Miller had to say in his scouting notebook,

“It’s a balmy 95 degrees with 100 percent humidity in Missouri while I’m writing this, which has me feeling like sharing a hit take to end the article this week. Jared Goff Will have a better year than Carson Wentz. Define ‘better year’ however you want as long as we’re not talking about wins and losses (team stat), Goff will take the next step this season with an improved offensive line and competent coaching staff around him. I also wouldn’t be surprised to see Cooper Kupp lead the team’s receivers in catches. I like Wentz a lot, but his slow release and trigger need to be improved before I’m ready to call out his sophomore season as an improved year. If that can be fixed, Wentz has a chance to become top-10 quarterback this season. I’m betting on seeing more of the same from Wentz with Goff playing like the former No. 1 overall pick that he is.”

This is great to hear from someone who is in “the in” in the NFL and its executives/scouts. It also gives a lot of promise to a quarterback that didnt show a lot of it last season. Meanwhile, Wentz was one of the best rookies last season.

The big key here for Goff is the new hiring of Sean McVay. How much can he get out of the second year quarterback and how does Goff translate what he is doing in practice to games as well as how he is grasping the offense.

Goff was the number one quarterback for a reason and it’s hard to evaluate him coming out of Jeff Fisher’s offense. Year two gives him a clean slate and hopefully a bright future.

Another takeaway from Miller is what he says on Kupp and how he could lead the team in catches. At the end of the day, I believe that will be Robert Woods, however, Kupp could certainly be involved in the offense early. But like every rookie, he will have his peaks and valleys.

I’m more of a believe it when I see it person, but if what Miller says does happen, it would mean that McVay and the “We Not Me” Rams are headed in the right direction.