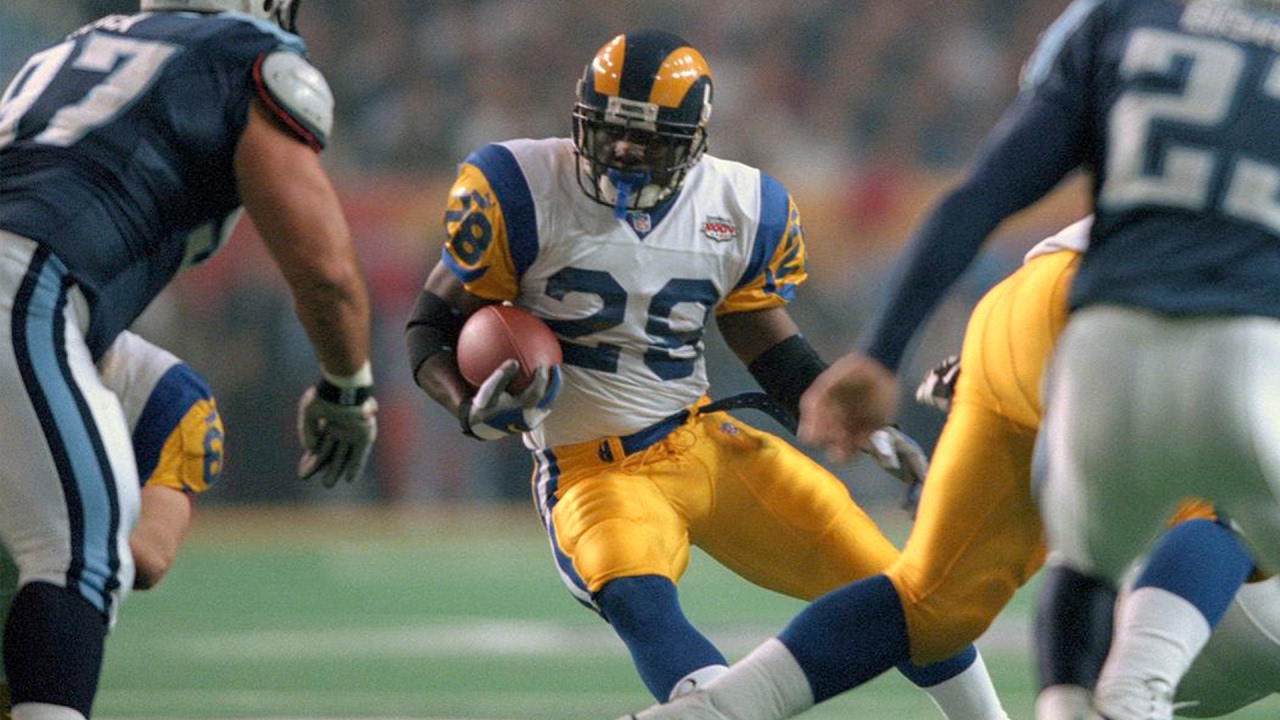 In this renewed series Jake gives you a complete all-time Rams roster going through each position. Here we look at running back, there were will be two starters (since we have to go split-back formation with this position), two backups, and an honorable mention. 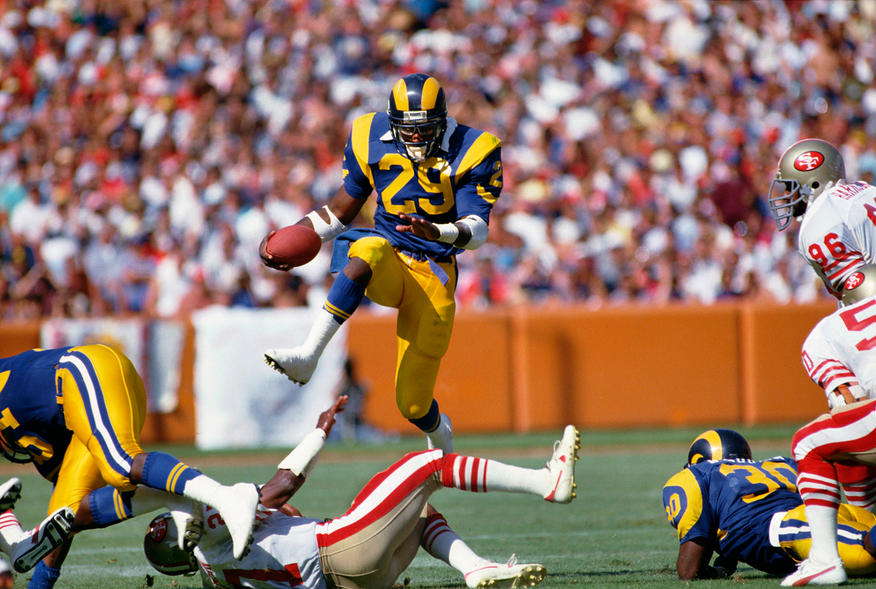 Some may disagree, while some may disagree that people disagree, but Eric Dickerson is the poster boy for the Los Angeles Rams and has been even after he left. He may get knocked by the modern day fans for lack of longevity, but Dickerson was a force of nature and was absolutely dominant. He set the rookie rushing yards record in a year that netted him the obvious Rookie of the Year award on top of runner-up in the MVP voting.

Dickerson never took home the hardware for MVP, which is mind-boggling in itself. However, that didn’t stop Dickerson from becoming an icon. He set the single-season rushing record that still stands today at 2,105 rushing yards. Dickerson was a track-star at Southern Methodist University (SMU) and he combined that speed into a giant frame of 6-foot-3 and 220 pounds.

I decided to place Dickerson here because he was the superstar for the Rams, he is the one that would likely be associated with the Rams on a Mount Rushmore. I decided to go split back formation, but my main go-to guy is going to be Dickerson. You can’t beat that speed and power. While, current Rams RB Todd Gurley looks like he has it, no one was and will never be Eric Dickerson. 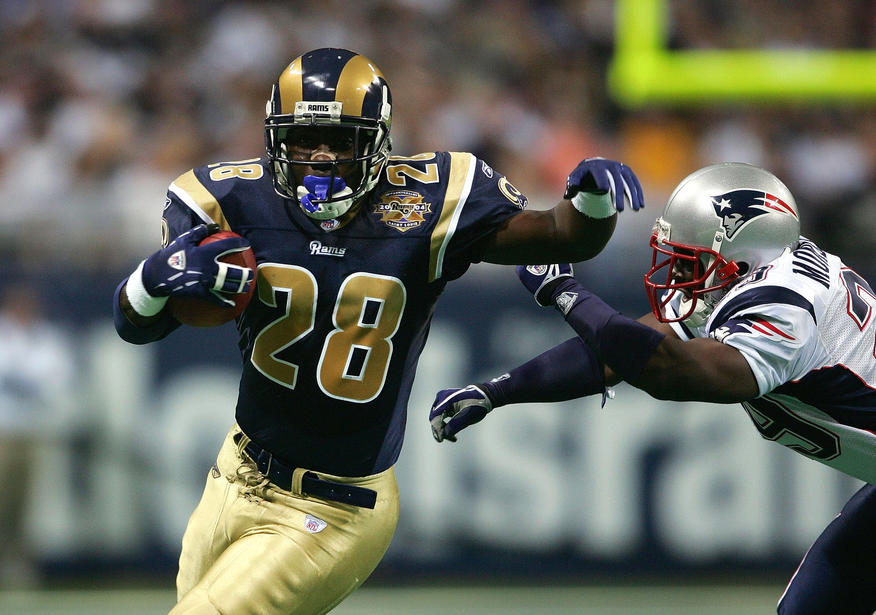 Yes, I did just split Dickerson and Marshall Faulk in the backfield to create the most terrifying offense ever. Yes, I did just do that. Faulk is my all-time favorite Ram and favorite NFL player, but I’m not being biased. Faulk was a fantastic running back, who in many people’s opinion falls into the top 10 and maybe top 5 for all time running backs.

Faulk was a superstar out of San Diego State who was drafted to grow with future Hall of Fame signal-caller Peyton Manning in Indianapolis. Faulk was every bit as advertised, but due to the fact he missed a team yardage goal the Colts decided to trade him away to the St. Louis Rams. There he would join Hall of Fame quarterback Kurt Warner and the rest was history with the Greatest Show on Turf. Faulk was such an elite talent, that when the Rams traded for him from Indianapolis he instantly changed their offense and added a new dynamic to them. It seemed like Faulk was the missing piece for an unstoppable offense.

Faulk had seven seasons with the Rams organization and during that time he helped win them their first Super Bowl Championship in two opportunities and was named Most Valuable Player capping off a Hall of Fame career. Having Faulk split with Dickerson out of the backfield as previously mentioned is lethal. Faulk in my personal opinion no matter what anyone says is a top five all-time back and the greatest pass catching running back ever. 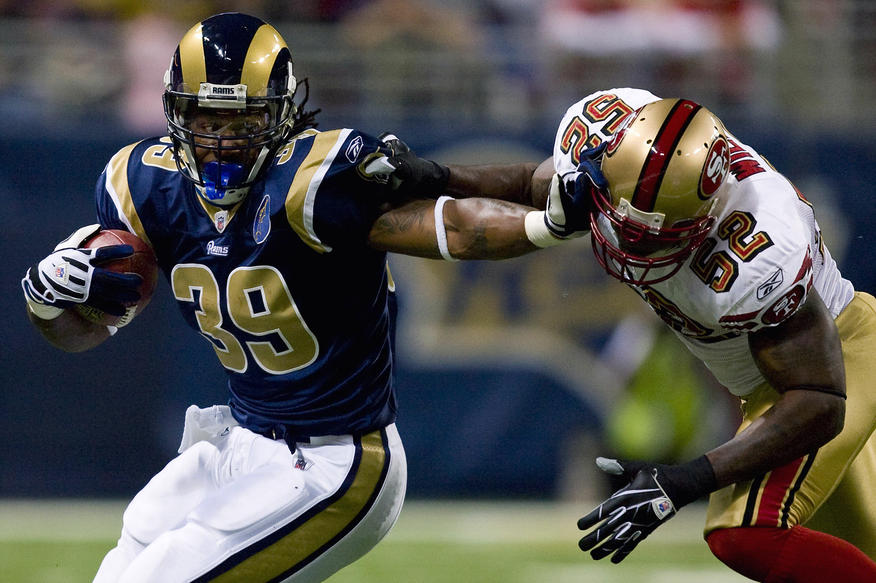 Steven Jackson, a former first-round pick drafted out of Oregon State to pass the torch to after Marshall Faulk ended up being pretty good. By pretty good, I mean really good or even great. Jackson ended up being the Rams all-time leader in rushing yards and he achieved that fit with his bulldozer running style at 6-foot-3. 229 pounds similar to Dickerson along with some sprinkled in agility like Marshall Faulk. Unfortunately, Jackson didn’t get a chance to play when the times were fun for the Rams. For his entire career he battled defenses who knew that No.39 was getting the hand off and he had to make something happen regardless.

Jackson never played in a playoff game, but he tried everything in his power to get the Rams there. Some would argue this is just right for Jackson, but others would argue that he should be No.l because of his status as the Rams all-time rusher. I think this is right where he belongs, but I also think fans seem to discount a lot of the remarkable things he was able to do. Not even just Rams fans, even though Jackson had a streak of eight seasons over 1,000 yards per carry on awful teams with zero blocking and no pass game to keep the defense honest. He only ended up as a three-time Pro Bowler and was never once an All-Pro. Quite a shame to say the least…

Sure, he didn’t get to play with an elite QB like Kurt Warner, but can you even imagine if he did? Jackson was an outstanding pass catcher out of the backfield and with Warner he really would have thrived. The unfortunate thing is that I think Jackson getting his number 39 retired is iffy (even though it’s a no-brainer to me) and I think he is going to be a Hall of Fame snub due to the fact the writers will look at his lack of playoff resume and zero super bowls and consider others who may not have been the talent Jackson was, but had the ring. 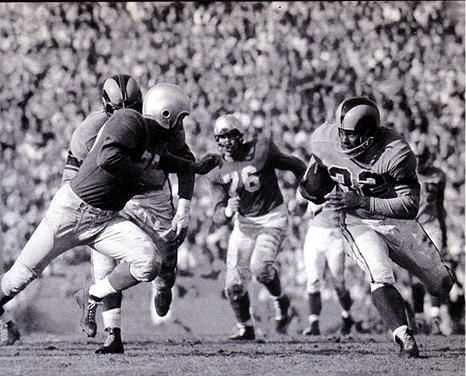 The Rams have a plethora of running backs in their history, but I don’t believe there is a more underrated back in the franchise’s storied history than Deacon Dan Towler. Towler is considered the best running back you don’t even know and there is a reason for it. Towler headlined the “Bull Elephant” backfield with running backs Tank Younger and Dick Hoerner. He was selected in the 25th round by the Rams and was absolutely dominant during his short career in the NFL.

Towler was extremely consistent, posting a 5.2 yards per carry average that is higher than Faulk, Dickerson and Jackson for the Rams. Unfortunately, his act of pure dominance, dominance in which led to an NFL championship in 1951, came to halt when Towler decided to leave the game of football forever to become a minister. There is no doubt Towler could have finished much higher on the Rams list of stats had he stayed in the NFL. Towler is sixth all-time in Rams rushing yardage.

One thing that is crazy about this list is that Towler is the only one on here that played for only the Rams. Yes, even Steven Jackson left via free agency, where as Towler played all his days with the Rams and retired from football as a whole. 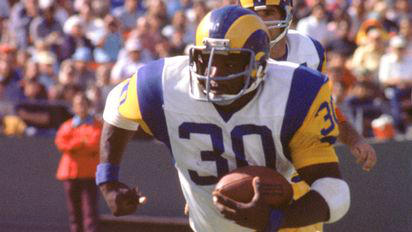 The eight-year Ram is fourth all-time in rushing for the franchise and a collector of five Pro Bowl appearances. McCutcheon who was drafted out of the third round in 1972 by the Rams is another one of those underrated backs I had to mention. While some may say that Dick Bass should be up here instead of McCutcheon, I believe McCutcheon beats him out by a hair especially with his playoff rushing performance. He set a playoff rushing record with 202 yards on the ground in one game and he even threw the go-ahead touchdown in the Rams Super Bowl loss to the Steelers.

McCutcheon had a good career with the Rams and has spent a total of 38 years with the franchise. Today, he works in the player personnel front office department as a National scout. Hopefully Todd Gurley replaces McCutcheon in a couple of years on this list…

What are your thoughts Rams fans? Are you okay with this position group or do I need to make some shakeups? Let me know! Be sure to stay tuned for the next article in this series when we take on the wide receivers.