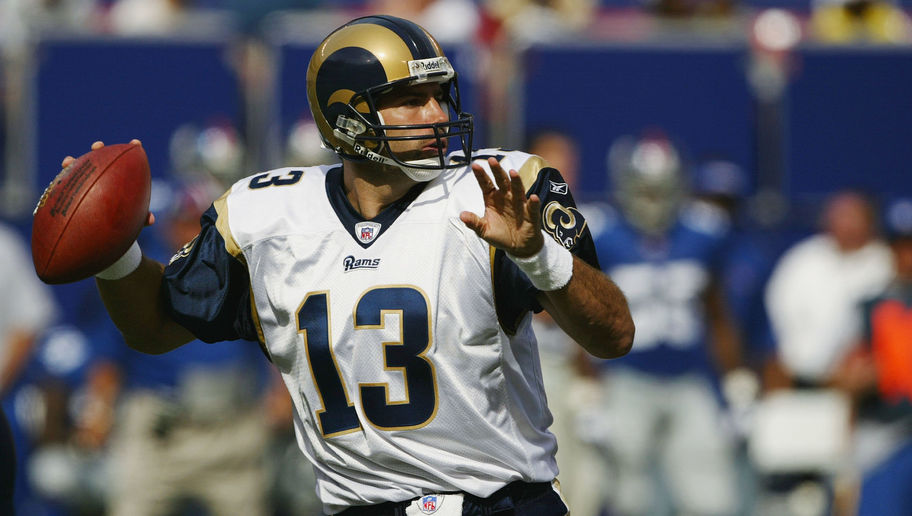 In this renewed series Jake gives you a complete all-time Rams roster going through each position. Here we start at quarterback where there were will be one starter, two backups, and an honorable mention. 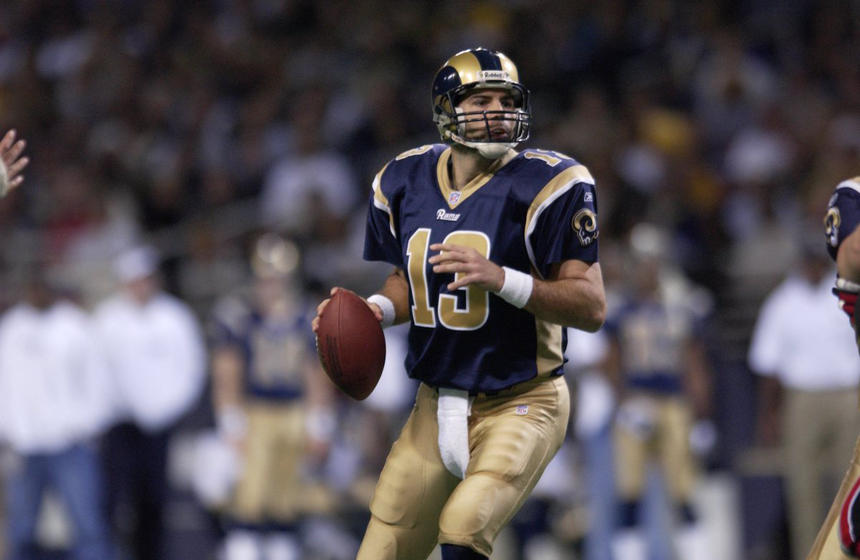 We all know the fairytale career of Kurt Warner. The one who bagged groceries, dominated the NFL Europe League and the Arena League. The leader that went from being behind Brett Favre in Green Bay to going to the Rams and backing up Trent Green.

Warner may have had some luck in the form of Rodney Harrison’s dirty hit that knocked Green out of the starting job in preseason, but Warner had paid his dues and when the time came he took over the job and ran away with it. Many may disagree with this choice, but the Rams only Super Bowl came from a team that was quarterbacked by Warner. Not just quarterbacked, but led in a way we had never seen, leading a team that truly changed the game by shattering records across the board including setting a new record for team offense points scored until the recent Patriots dynasty broke that.

The Rams were bad before this magical run with a magical quarterback, a phenomenal offensive mind and offensive weapons that would give defenses nightmares. It didn’t end the way we all may have wanted, but there is no denying that Warner is a Rams legend and with his 32,344 passing yards, 65.5 completion percentage, 208 passing touchdowns and career 93.7 quarterback rating in 116 games as an NFL starter. It’s easy to understand why this newly enshrined Pro Football Hall-of-Famer would be starting on my all-time Rams roster. Warner added two MVP awards, two All-Pro awards and four Pro Bowl team appearances to his resume of an impressive career. 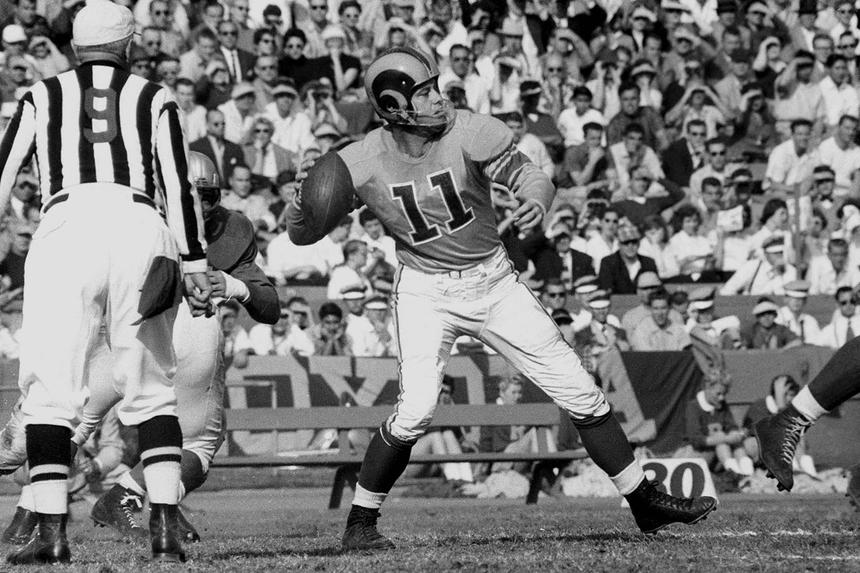 The Dutchman, as they called him, had one of the most prolific careers for an NFL quarterback. The crazy thing about Norm Van Brocklin was the fact he was drafted to a team that already had a legendary quarterback in Bob Waterfield. Can you even imagine that today? Waterfield was 29 years of age when the Rams made the gutsy selection of Van Brocklin. That’s like if you took Aaron Rodgers and how much of a superstar he is today and drafted the top overall quarterback because you couldn’t pass up on him.

Now, with that being said The Dutchman was picked in the fourth round of the draft due to concerns he would ultimately give up playing football. The Rams clearly grabbed the bull by the horns and pulled the trigger on an opportunity they felt they could not pass up. Rams Head coach Joe Stydahar had a plan and as crazy and diabolical as it gets, he platooned the rookie Van Brocklin with the star veteran Waterfield.

During this time they became the “Greatest Show on Grass”. Stydahar turned out to be a genius with the way he utilized two would-be Hall of Famer’s. The team set the crippling average of 38.8 points per game back in 1950 which has never been broken and in this day in age seeing the Greatest Show on Turf and the New England Patriots dynasty offense, I believe it will stand the test of time. Van Brocklin ended up going to six Pro Bowls and was able to end up winning two NFL Championships with the Rams. The Dutchman threw for 23,611 yards in his career to go along with a whopping 173 touchdowns through the air in 101 games started. To add to all of that his 554 passing yard record remains as the most yardage thrown for in a single-game. 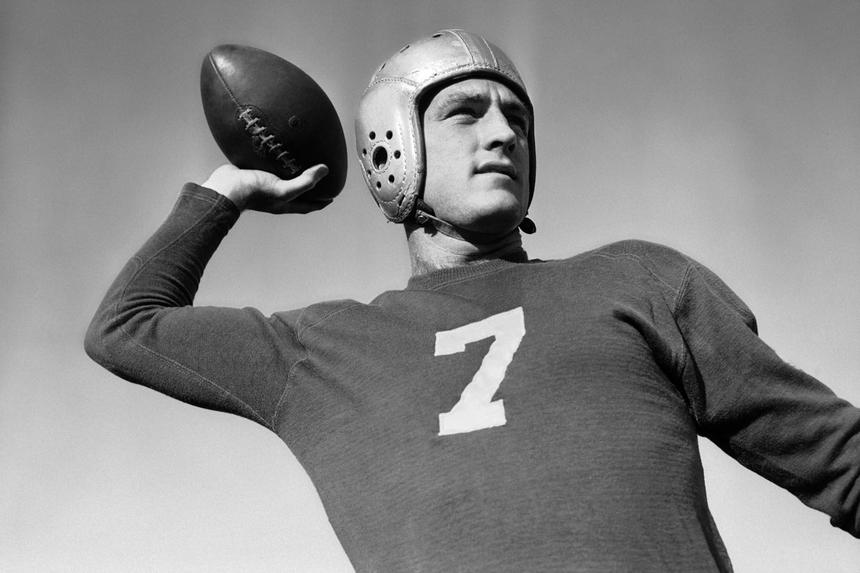 The only quarterback who has had his number retired by the Rams organization falls to third-string on my roster. This, however, is not a knock on Waterfield himself. It doesn’t help that we are trying to narrow this down when talking about three Hall of Famer’s. Now, Waterfield’s stats do not pass the eye test at all seeing as he actually had more interceptions than touchdowns which in today’s league would get you a spot on the wall of shame.

How dominant was Waterfield you may ask? So dominant, the Rams owner Dan Reeves decided to make his the highest paid player in the league in just his rookie season after leading his team in his rookie year to win a championship over the Washington Redskins. Again, the stats may not look pretty, but Waterfield is a Hall of Famer and a two-time NFL champion. 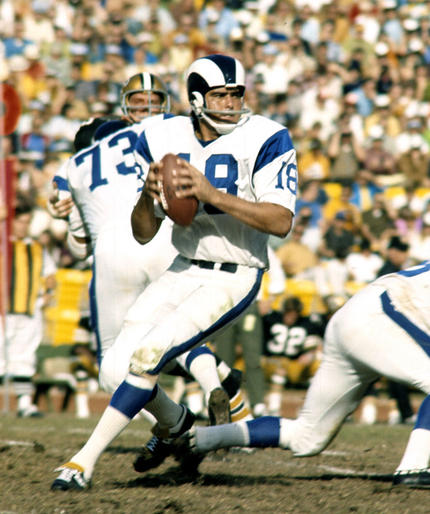 This is one of the tougher honorable mentions on this roster. Roman Gabriel was fantastic with the Rams, he isn’t quite a Hall of Famer, but led the Rams to a 74-39-6 record as a starter in 119 games over a span of 11 years. Gabriel was, of course, a former MVP and thus had to be mentioned in this piece in some facet. It will likely hold him back that he never won a championship like the top three mentioned, but you know your team has had a nice rich history if an MVP at QB is an honorable mention. This is the pick I expect to receive plenty of disagreement on.

What are your thoughts Rams fans? Are you okay with this position group or do I need to make some shakeups? Let me know! Be sure to stay tuned for the next article in this when we tackle running backs.