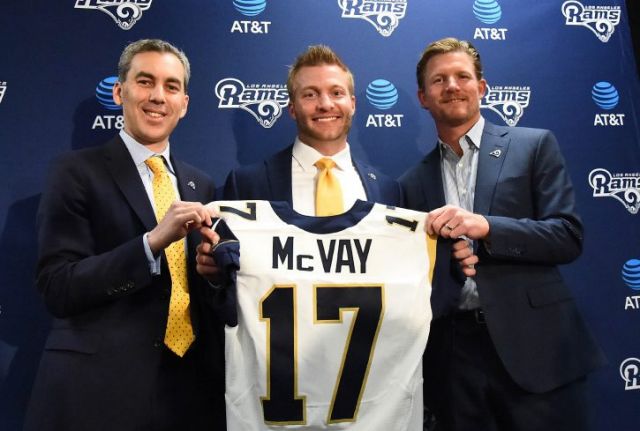 With the offseason for the most part over and training camps set to begin within the next month, experts will certainly be delving in on each team’s offseason. As he always does, Mike Sando from ESPN.com who has his connections inside the league.

Sandy recently wrote a piece asking NFL Executives what they thought of each team’s offseason and here’s what they had to say:

“There are so many things [McVay] cannot know about that job and what it takes. They have some veteran guys, especially on defense. If they are struggling, it is great to say you have a lot of energy and all that, but some of these guys are older than him.”

“It was tough for the Rams this offseason because they were short on draft picks [following the Goff trade last year]. You don’t get a big infusion there. I do like the coaching better, and I like Wade. Hopefully, you roll the dice and have a young, dynamic offensive coach. Maybe that helps the quarterback.”

It’s hard to disagree with either coach or executive. McVay is young and he will have a learning curve. There’s no doubt about that. It’s certainly a concern and something McVay will need to prove the critics wrong about.

The executive also makes a good point about the Rams’ draft picks. There’s no question that effected their draft. It would have been nice to be able to draft a guy like Corey Davis in the top five or take an elite talent that could help the team.

However, if McVay has a positive effect on Goff, it will all be worth it. The second year quarterback struggled under Fisher which the same can be said for every quarterback not named Case Keenum. McVay will have a QB-friendly offense that will hopefully help Goff and his development.

The Rams currently have a C which given the circumstances, isn’t a bad thing. They hit home runs with McVay and Wad Phillips, but not having draft picks and hiring an unproven head could have its repercussions.

For the most point these grades are pointless, but it is nice to hear what people around the league are saying and what they think. At the end of the day, the Rams’ offseason grade will be given after the season when they’ve played all 16 games. Only then will we know how they truly did.

Get a First Look at Los Angeles Rams New Uniforms