Get a First Look at Los Angeles Rams New Uniforms 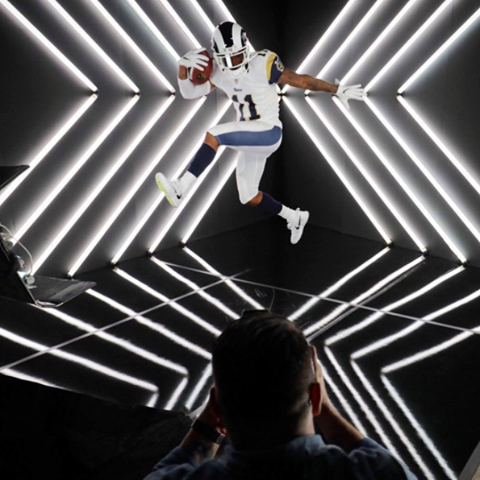 From now until the Los Angeles Rams move into their new stadium in now 2020, COO Kevin Demhoff and company are making it a point to put an LA touch on the team’s uniforms. This season the team is moving to Blue and White helmets as opposed to the Blue and Gold and the team’s pants will have more of the blue and white inspiration as well.

On Monday, the team posed for pictures in the new uniforms giving fans a first look at what they look like.

To be honest it’s not a bad look and it’s a look I like a lot more than I thought I would. From the looks of these pictures and the blue and white touch, that seems to be the direction that Demhoff and company are going with the uniforms.

The gold seems out of place, but by the time the stadium opens, the gold could very easily disappear. The Rams are making the transition slowly as much as fans would like them to make a uniform switch ASAP, because quite honestly, for a team that used to have great uniforms, the recent look hasn’t been good.

Soon enough it looks like the team seems to be going in the classic 50’s direction rather than the 70’s-90’s blue and yellow look.

Monday was only pictures, but it’s only a matter of time before we finally get to see them in action. The Rams play their first preseason game on August 12.

ESPN: Jared Goff Will Take Biggest Leap Among QBs in 2017