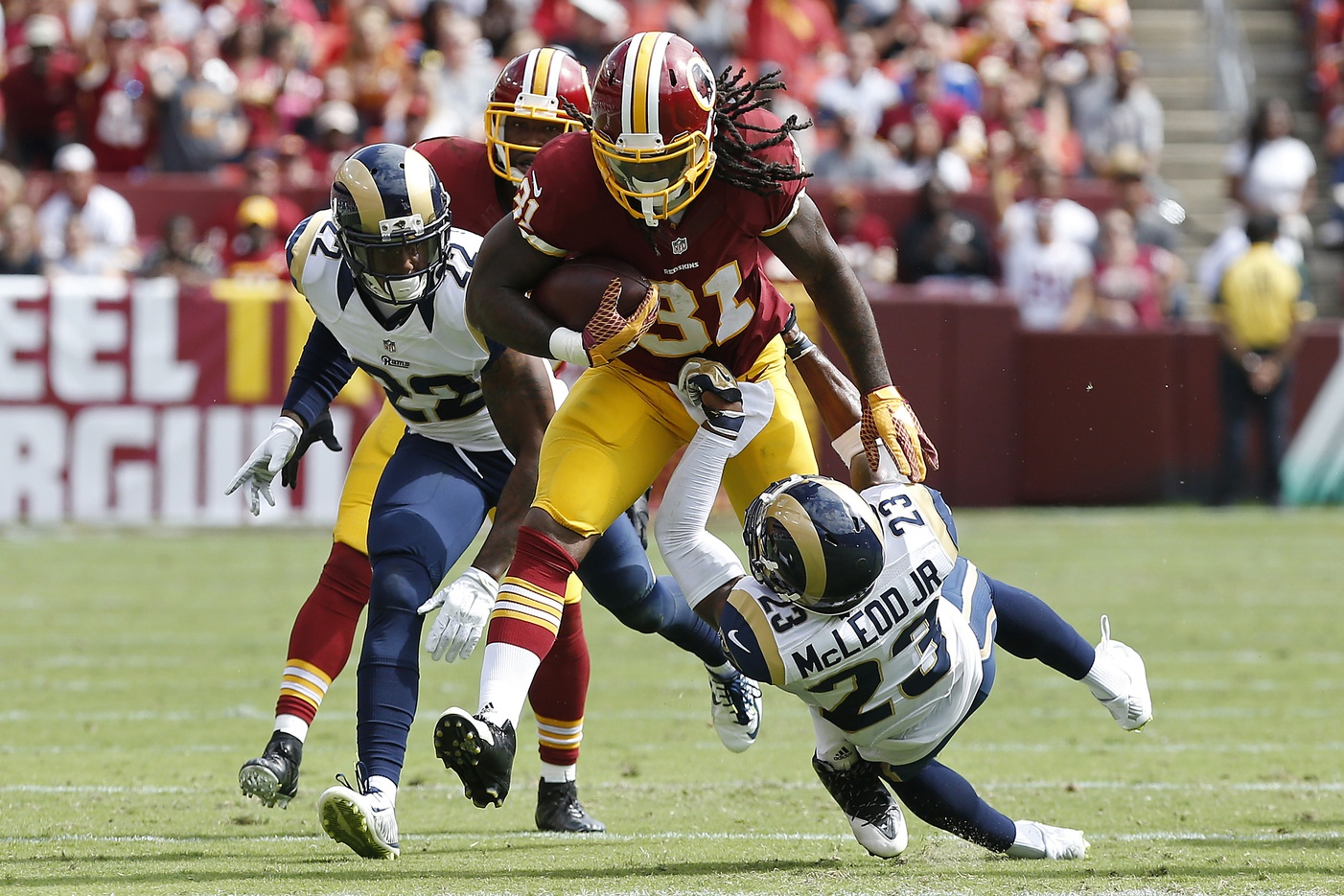 The former third-round pick of the Washington Redskins appears to be done with the team and a release could be imminent. The real question: Should the Rams consider reuniting him with Sean McVay?

Matt Jones is a bruising back that you probably already know just off his dominance against the Rams from a few years ago. Jones brings a nasty mean streak to him as a runner, he’s not the fastest player on the field, but his power makes up for it. As great as Todd Gurley is…he isn’t quite the bulldozer that Jones can be, which means the Rams likely don’t have that goal line type of back on the roster if they want to spell Gurley.

According to CSN Mid-Atlantic the third-year running back is not in the Redskins plans moving forward after drafting former Oklahoma Sooner RB Samaje Perine. Jones, definitely was not okay with the move as he is holding out of OTAs, which has angered head coach Jay Gruden.

If Matt Jones continues to skip OTAs it’s likely he will be cut and the 6-foot-2, 232 pounder will be a free agent. Now, I have no clue if Sean McVay had a relationship with Jones, but throwing the connections out of the window for a minute, the Rams don’t have a 6-foot-2 and 230-plus pound bruising back. Obviously, the Rams are well over the cap, but that is due to the off-season rosters expanding to 90 men. Once the final cuts are made the Rams will likely be right where they need to be.

Jones has only had 243 carries for 950 yards rushing, six touchdowns as well as adding another 377 yards receiving out of the backfield on 27 catches. The reason for those stats being a little underwhelming at first glance was due to the time-share in Washington, but also the fact Jones only has played in 20 games in two seasons and only has seven official starts under his belt. Clearly Jones needs a change of scenery and the Rams could give it to him.

On the other side of the coin, the Rams have running backs Malcolm Brown, Aaron Green, Justin Davis, Lance Dunbar, Lenard Tillery and De’Mard Llorens. A move to get Jones would really speak on the coaches behalf on what they see and believe with the running back group thus far. My opinion and my knowledge of the situation coincide in the fact the Rams should be and are wanting to add a bigger pass catching back next season. Jones could definitely be that guy and cut down the wait time for that to happen.

Obviously, there is one key variable if any, for Jones to sign with the Rams and that is the first part, getting released. The team may choose to keep him and trade him, but overall I see Jones being cut before preseason. Is Jones a hidden need for the Rams? I would almost say yes, because of his ability to punch the ball in during short yardage attempts. As great as Gurley is, he was still stuffed plenty of times at the goal line and at least one of the times it costed the Rams a win.

The jury is out whether or not Matt Jones can be an NFL starter, but coming to the Rams he wouldn’t have to be. This is likely the best route for Jones, going back to an old coach that understands the game of football and is comfortable utilizing him in both the running game and passing game. If Jones is to succeed at the NFL level and get his career back on track, the Rams seem like the perfect fit to propel his stock back to his rookie year.

Would you grab Matt Jones if he became available via free agency? Let us know!