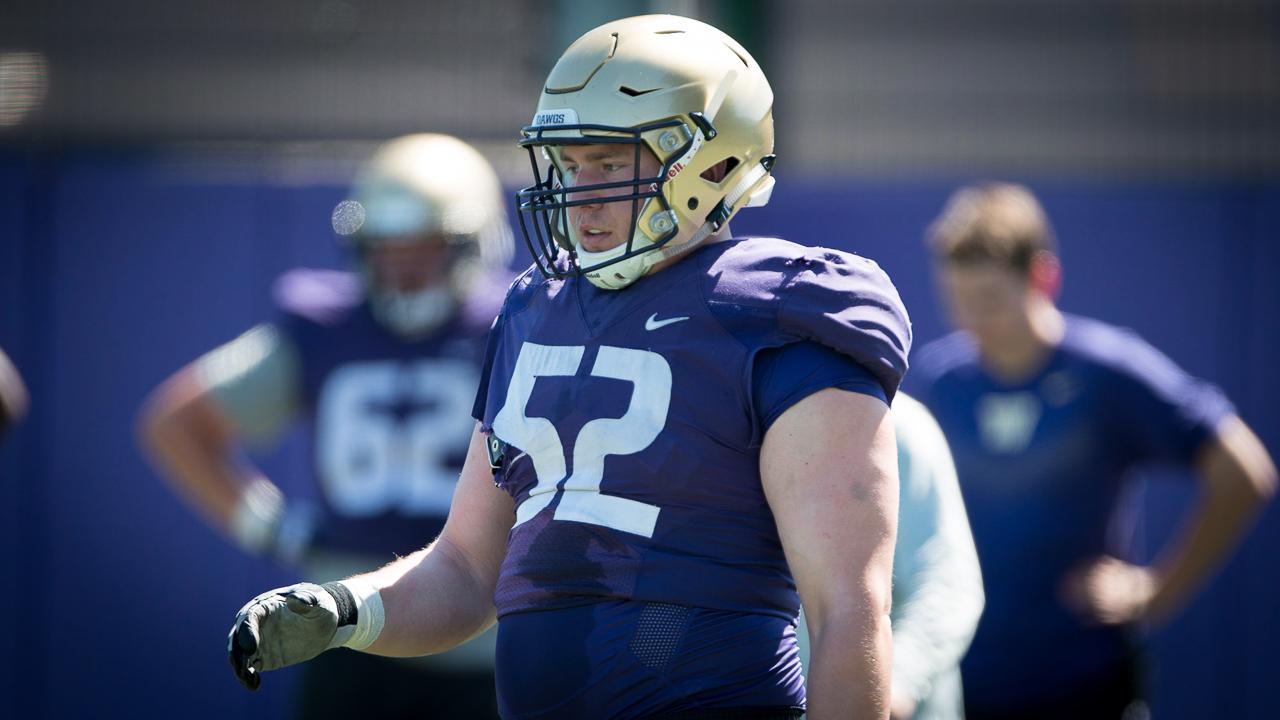 The Rams are underway in OTAs and we are now just starting to hear everyone’s favorite type of buzz. While the Rams signed their short-term option at center in John Sullivan, they could have someone at center long-term in one of their newest UDFA’s.

Jake Eldrenkamp, a guard from the University of Washington appears primed to compete at the biggest need and question mark on the offensive line, center. Eldrenkamp is that mystery named player that Les Snead and Sean McVay mentioned in the post-draft press conference about having a seventh-round grade on him.

Sean McVay according to Rich Hammond of the Los Angeles Daily News, had this to say about Eldrenkamp, who is hoping to push forward in the battle for the starting center spot.

“He’s a guy that’s got good movement. He’s got some flexibility to be able to play on the interior line, but he was a guy that Coach Kromer, our scouts, did a nice job identifying as a player that we feel like could project well with some of the things we’re looking for.”

This is exactly what the Rams need to find this off-season in my personal opinion. How many times have the Rams signed the big named center like Scott Wells or Jason Brown only for them to completely fall flat. It’s time for the Rams to look at finding their long-term option out of the young group they have now. Sullivan (as long as he stays healthy) still offers stability at the center spot for the Rams. No one is guaranteed to start all 16 games so to assume a player that has had some injury history will remain perfectly healthy all year seems irrational. Eldrenkamp’s opportunity is wide open, but there are definitely others as well.

Eldrenkamp is receiving praise now, but the key is what will happen when the pads go on, because Eldrenkamp still has to battle out players that have legitimate NFL experience such as Demetrius Rhaney, loads of upside, but zero to no chances to prove himself and Austin Blithe who was formerly of the Colts and was claimed off waivers. Now, we all can loathe the Bills for them matching the Rams offer of Ryan Groy all we want, but that won’t change a thing. Groy will not be a Ram unless the Rams either go out and trade for him or sign him after his two year contract. Out of both of those it seems like the most realistic at this point would be to trade for him, but that’s discussion for another time.

Let the Bills loathe the Rams because the Rams may have missed out on Groy, but they got the most valuable piece of the puzzle and that’s an offensive line coach that is a true coach and teacher of the game in Aaron Kromer. Without Kromer at the helm the Rams wouldn’t be able to cross-train their guards to play center and likely wouldn’t see the turnaround that is almost imminent for a line that was blown up and dominated game-in-and-game-out.

It’s early, but news and comments like these matter and they especially matter to a UDFA trying to fight his way onto the roster let alone even start.