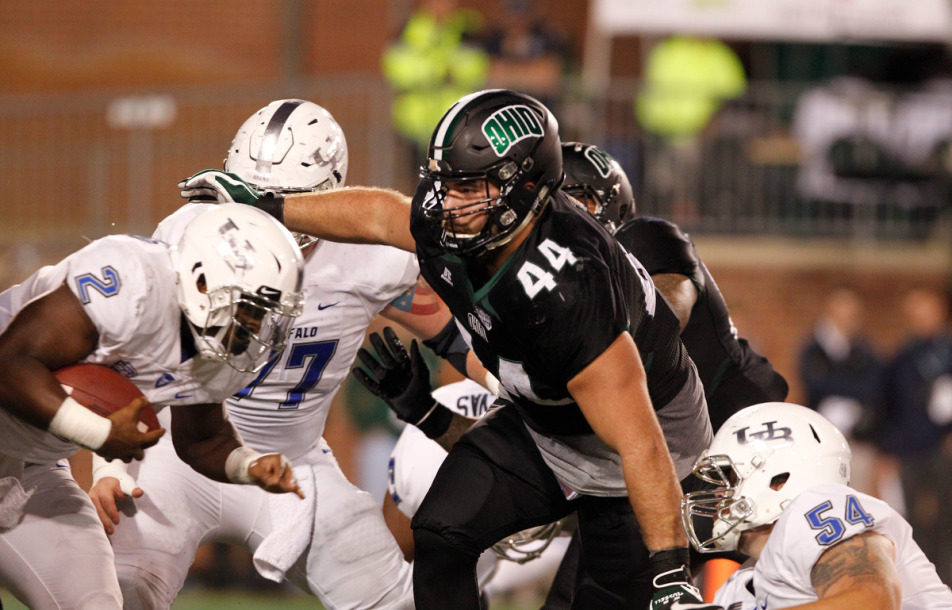 The next player from my UDFA’s series is a kid I enjoy like most, comes from Ohio University. Casey Sayles, The 6-foot-3 and 288 pound defensive lineman, has a very high ceiling to reach the Rams 53-man roster. His skills emulate one current Ram defensive lineman, Louis Trinca-Pasat, from out of University of Iowa.

When reviewing his game film, Sayles quickness and explosion stood out the upmost of his skill level. Very agile, and can play the one-three-and-five technique on the defensive line, with a borage of counter moves.

The 2016 season, Sayles player in 14 games registering 32 tackles (six and half for losses), five sacks and three passes defended, which all earned him third-team All-MAC (Mid-American Conference) player honors.

Sayles had five batted passes over the last two seasons and tied 10th among all defensive interior players last season with 27 quarterback hurries.

Sayles career total of 37 total QB pressures were more than the drafted defensive linemen Seattle Seahawk’s Malik McDowell, Cleveland Browns Caleb Brantley, and Philadelphia Eagles Elijah Qualls. Sayles provoked 8.6 percent of his pressure on pass rushes which was 24th best in the FBS in the 2016 season.

Sayles is considered to be my sleeper candidate to make noise on the Rams practice field to achieve the 53-man roster. Left un-drafted by 32-teams has left venom in his veins to prove those organizations wrong, will be the fuel that lights his fire. If caught up in a numbers game, expect the Rams to reclaim him once he clears waivers to the practice squad. My opinion, Sayles will have a NFL career on a 53-man roster soon