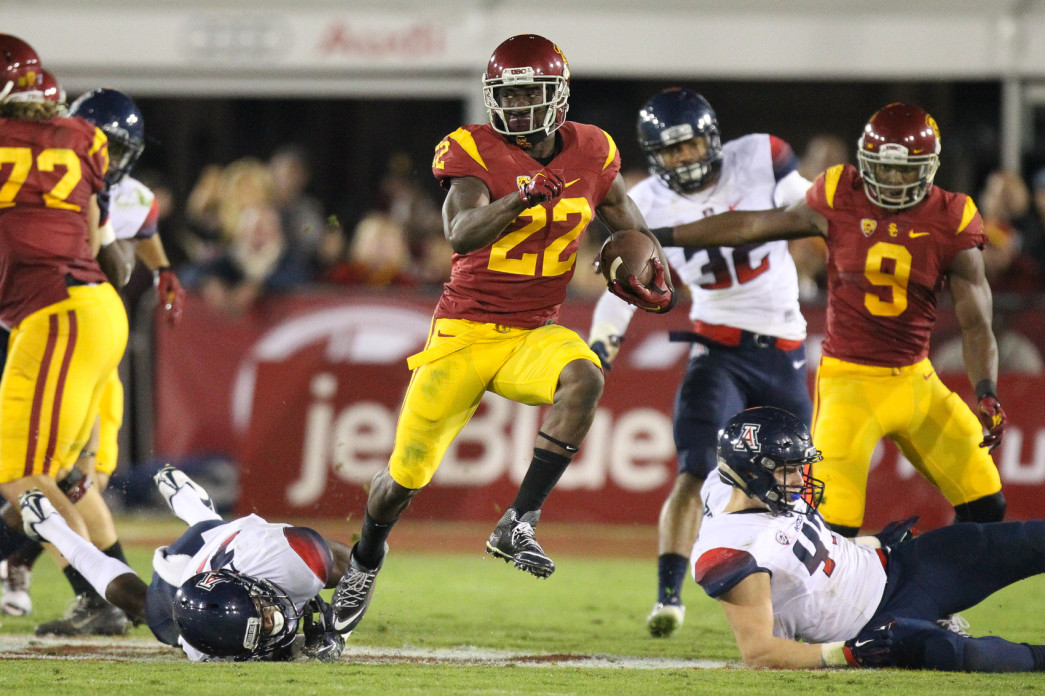 Next up on deck with the Los Angeles Rams UDFA’s coverage is University of Southern Cal running back Justin Davis. Davis signing doesn’t make much sense, as where the Rams are pretty much already deep at the running back position. With returning players of Todd Gurley, Malcolm Brown, and Aaron Green, and free agent signing of Lance Dunbar, Davis seems to have his work cut out on him making this team. But wait, I also failed to mention the kid who broke the SWAC’s (South Western Athletic Conference), all-time rushing record, Lenard Tillery also signed last week.             .

Davis senior year at USC turned out to be a rather disappointing season. First game of the season against the Crimson Tide of Alabama, he was held to only two rushing yards on seven carries. He would try and get back on track with back to back games of over one hundred yards but, he would suffer an injury to his ankle. He never seemed to be able to get back on track subsequently losing his starting job to Ronald Jones II.

Standing at 6-foot-one and 209 pounds, Davis has the physique of a wide-receiver. Has great vision on the field and a very shifty ball carrier, whether he’s running inside or outside the tackle box.  As a former sprinter, his speed is deceptive when he carries the ball. He doesn’t look too exciting until he’s already wiggled himself through the gaps on the offensive line.

He catches the ball well out the backfield with good soft hands and with the ability to elude the defenders. The knack on Davis is that he can’t stay healthy as well as fumbling the ball became an issue too. He is not built to be an every down back like the other running backs on the roster, but provide as a relief back if needed.

In my opinion, I just don’t see any room on the already crowded depth chart for Davis making this team. If he can show the coaches that he has the ability to play well on special teams as a returner, that more than likely will be the way he’ll break the 53-man roster. If not, expect to see Davis to stick around to after the first round of cuts after the start of pre-season play.