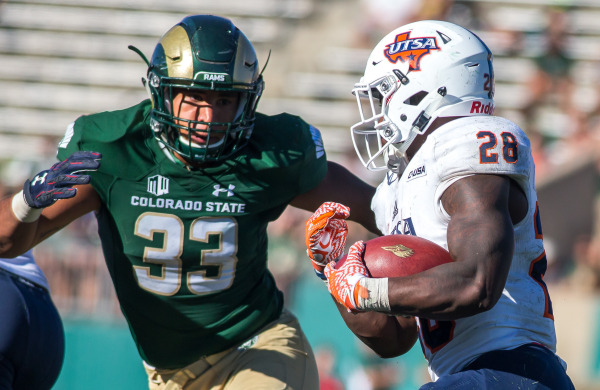 In my series of the Los Angeles Rams UDFA signings, the first two of 11 players were offensive lineman, Jake Eldrenkamp and defensive back Ishmael Adams. The next free agent I will cover is inside-linebacker Kevin Davis out of Colorado State. At Colorado St. playing for a team of different colors, he comes to a team carrying the same team name as Rams.

Davis, subjected to injuries his first couple of seasons at Colorado State, turned out to very productive starter his last two collegiate seasons. A good tackler but, if he wants to get the eyes of line-backer coach Joe Barry, he will need to get a bit more aggresive at the point of attack, if not he will struggle to make any NFL roster including the Rams.

Standing 6-foot-2 inches tall and weighing 235 pounds, Davis probably will be better served as converting to an outside linebacker. It’s likely that he lacks the physicality and ability to anchor down as an inside backer.

At Colorado State, he active at the line of scrimmage making many plays where he recorded 24.5 tackles for losses in the two seasons he started. He pursues well in space and the ability to still make plays on shifty running backs. In his two starting seasons, Davis also recorded over 100 tackles each of those two seasons.

Some of his strengths are the ability to drop in coverage as shown the ability to cover man-to-man. When viewing his film, as a blitzing linebacker, he disguises his blitzes well with the ability to shoot past offensive lineman caught napping on blocking assignments.

Davis needs to decide what a better fit it is for him either as an inside or outside backer, because he will have long hill to climb needing to beat line-backers already on the roster. Alec Ogletree and Mark Barron already penciled in as the starters, he will try beat out, returning roster players, Robert Quinn, Bryce Hager, Nic Grigsby, Corey Littleton, and Josh Forrest. But, you also have to add to the equation is drafted line-backers Samson Ebukam and Ejuan Price, but not to forget free-agent signing of Conner Barwin and Carlos Thompson, leaves a very dark tunnel for Davis to navigate out.

In my opinion, I strongly feel that the coaches will put Davis in the position that they seem best to fit the team’s defensive schemes. His only shot of making the team is at special teams, but, the window of opportunity is nearly closed shut. With Coach John “Bones” Fassell returning as special teams coach, he has many returning players of his special team, and Davis will need to play at a pro-bowl caliber to make special teams, if not, he will not make it past the first round of roster cuts