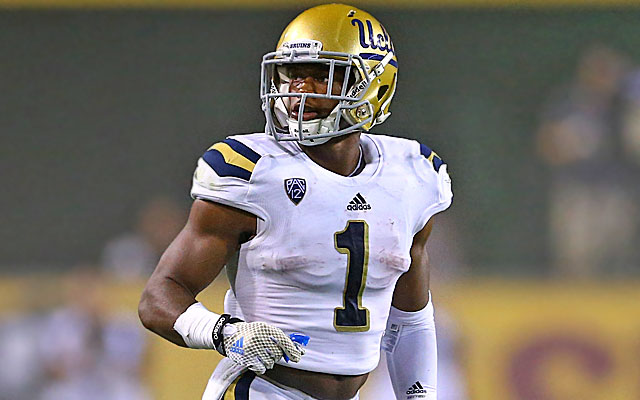 Ismael Adams, son of former NFL defensive back Stefon Page, signs with the Los Angeles Rams as a UDFA (un-drafted free agent). The native of Los Angeles, played football at the same high school of Jimmy Clausen, (Oaks Christian Academy),  the former second round draft selection of the Carolina Panthers of the 2010 NFL Draft.

The 2014 season, served as Adams best season, where he was named as an Honorable Mention at cornerback. He tied a UCLA’s record by returning two interceptions for touchdowns in a single season. He added another record that season, by breaking another Bruins record for the longest kick-off return of 100-yards for a touchdown.

At UCLA’s pro day, Adams performance wasn’t as of great, as he ran a 4.5 flat in the forty-yard dash, bench press 225lbs, 15 times, but struggled with disappointing  vertical and broad jumps of 27 inches and 9-feet-3 inches.

The 2017 NFL Draft, served as one of the deepest drafts for defensive backs and wide-receivers in several years. Adams went undrafted after day three of the draft and waited on a phone call on a NFL team willing to sign him, as he received from the Rams.

Adams arrived to the Rams with a criminal past, a no contest plea, stemming from an assault and battery charge, that he plead to, after he used force to rob a cellphone from an Uber driver in August of 2015. UCLA’s Head Football Coach Jim Mora Jr, suspended Adams from the football team immediately after his arrest. The suspension would last for a total of three games. UCLA reinstated Adams back to the team in September of 2015, after the District Attorney’s Office of Los Angeles County, declined to file charges against the UCLA athlete.

Adam’s misdemeanor charge didn’t turn the Rams away from signing him, there was talent in the kid the defensive coaches seen in his film. Adam size is about the same of his current Ram’s teammate LaMarcus Joyner, and plays the slot-corner as a epitome of Joyner.

Adams will find himself in a already deep and talented Ram’s defensive backfield which already added two key free agent acquistions this past off-season. Nikkel Robey-Coleman and Kavon Webster, will be just two of the players Adams will have to compete against for a roster spot. He has a great chance of showing defensive coordinator Wade Phillips and defensive back coach Ejiro Evero, his skill talent and the deserving right to be on a NFL roster. A pedigree of a former NFL defensive back, perhaps he will continue the legacy of the Adams name.

It is my opinion that Adams will be last decision for the 53-man roster, and will a tough decision, and Rams aims to keep him, if not, sign him as a practice squad player.