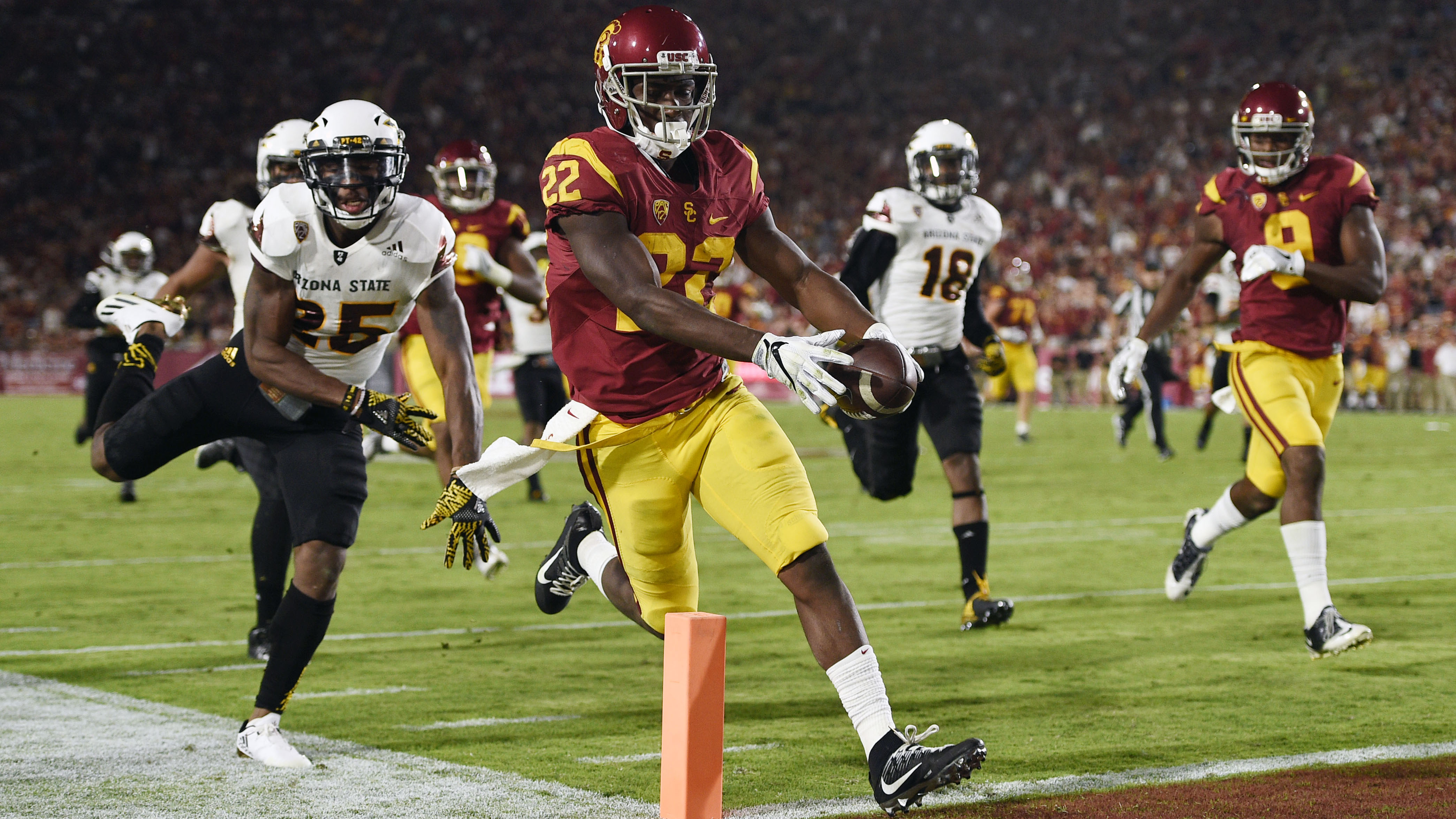 After the draft every team in the NFL sign undrafted free agents. It’s a period of time that lasts until all rosters are full. Some teams sign a quarter of a roster full of them while others sign a smaller amount. All the teams are different, the Rams signed 11 officially, now we will take you through each one and what they bring to the table for the Rams. 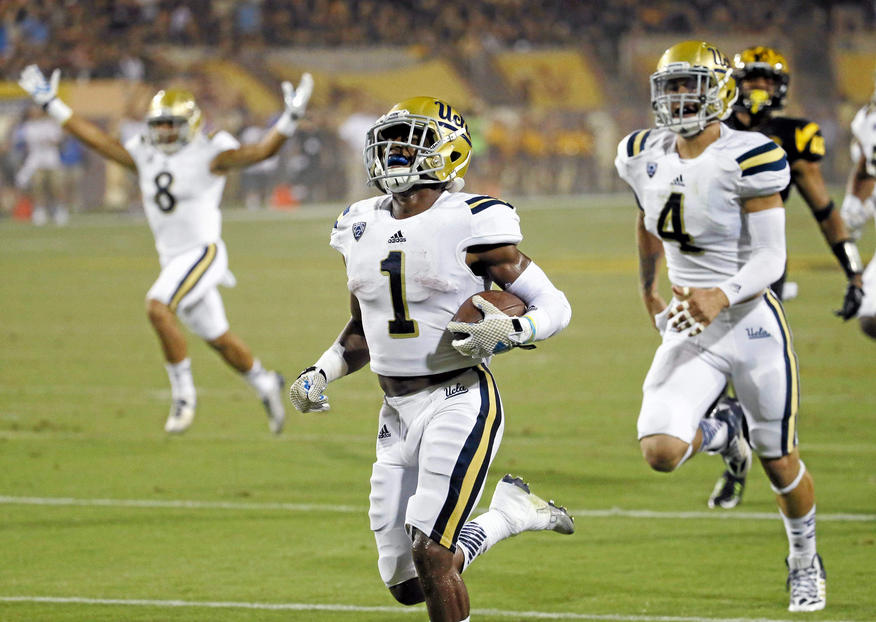 Adams is going to be known by many Rams fans since he is from UCLA. He is a former cornerback that switched to wide receiver and had minimal production. In all honesty, to me, he is a cornerback and a return man that is really going to have his work cut out for him to make the 53 man roster.

At his school’s pro day, he ran a 4.50 forty yard dash and 15 reps on the bench. He doesn’t have the greatest vertical at 27 inches and his broad jump doesn’t turn heads either at just over 9 feet. He racked up 138 tackles, 4.5 for a loss, a half sack, eight interceptions, three returned for touchdowns and 12 pass breakups at cornerback. As a returner Adams averaged a whopping 24.2 yards per kick return.

The local kid was born in Inglewood, California, his dad Stefon Adams was drafted in the third round of the 1985 NFL Draft as a defensive back. Ishmael Adams saw extremely limited amount of playing time in his freshman year that he ended up redshirting and soon to be graduating with a degree in Sociology. 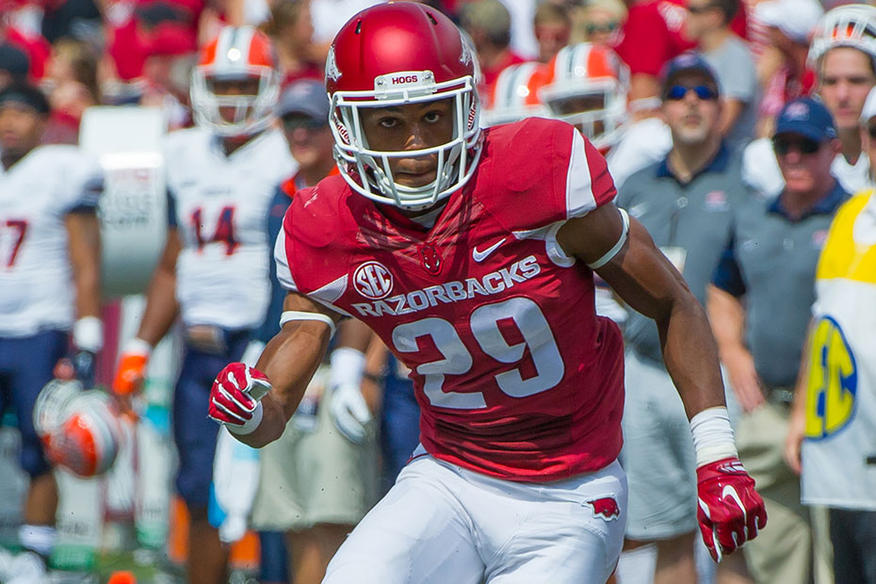 Collins is a speedy cornerback who has been the bearer of consistency. He ran a 4.47, jumped a 36.5 inch vertical and almost an 11 foot broad jump so he has the nice measurables. The consistency is shown by the fact he keeps his numbers within the neighborhood of each other in categories such as tackles and pass breakups.

The razorback corner actually had quite the scare in 2013 when he randomly collapsed on the sidelines in the game versus Southern Mississippi. Obviously judging by the fact that was almost four years ago…it’s safe to say he’s okay.

The real issue with Collins is the fact he is so light, he will either need to add weight or battle hard and prove he can contribute on special teams. 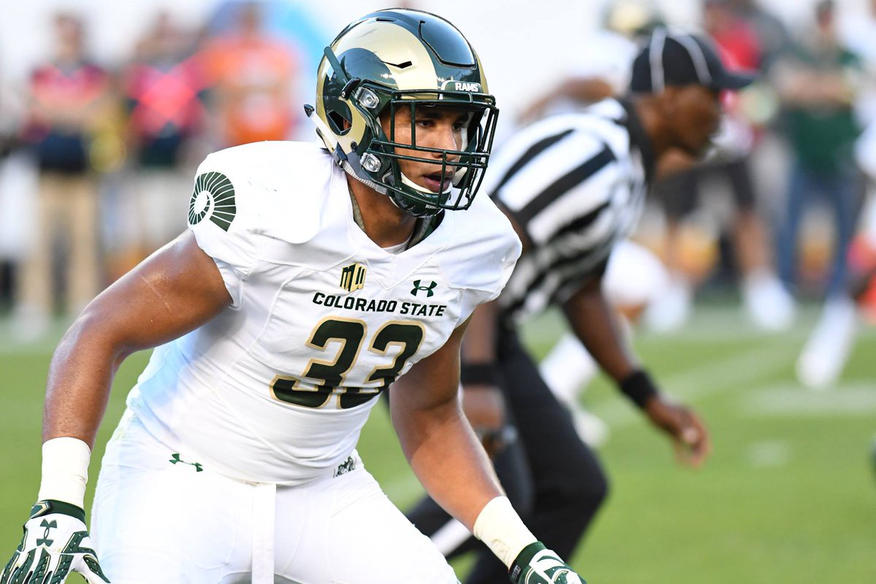 Davis was wearing horns in college and will apparently wear horns in the NFL with the Rams too. He was a combine participant that likely got written off after he ran a 4.91 forty yard dash. Davis adds the ability to drop in man or zone coverage and does make the sneaky touchdown saving tackles on running backs that are shiftier and faster than he is.

He’s a two-year starter that doesn’t really have the physical power or strength to finish tackles against better competition at the next level. He lacks the instincts and has a hard time getting off blocks. Coming to a team that just drafted two linebackers and added one via free agency, there is a good chance he is going to have all the odds against him.

Davis finished his career playing in 49 games, accumulating 257 tackles, 27 tackles for a loss, seven sacks and two interceptions. He will receive his degree in Sociology after spending five years with Colorado State University. 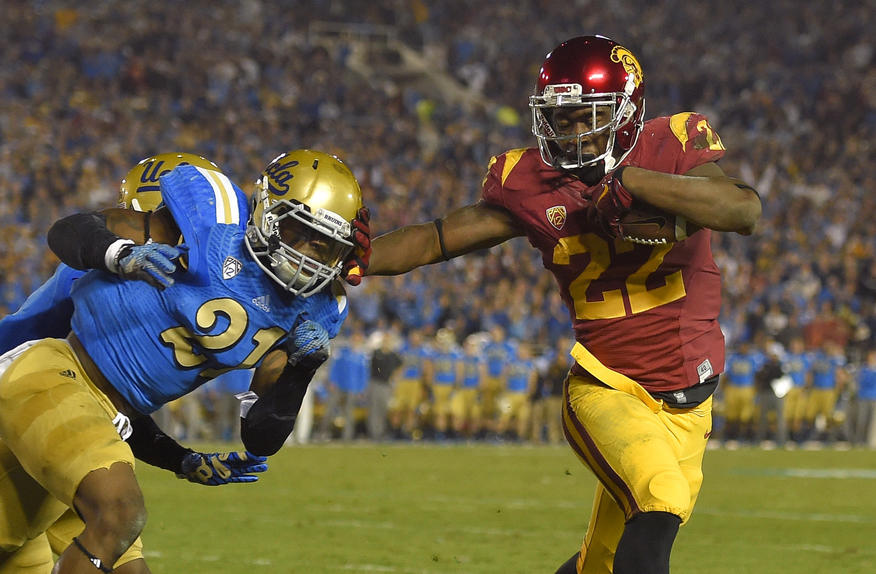 Another Davis, but more well-known Davis is Justin Davis who hails from USC. Rams fans get their UCLA and USC guy. Not quite Fabian Moreau or JuJu Smith-Schuster, but still players from the colleges. In all honesty, I like Justin Davis.

Davis was considered a late round grade due to his fumbling issues and past injury concerns that held back a promising career. He finished with 2,465 yards rushing, 19 touchdowns, 46 receptions, 400 yards receiving and two receiving touchdowns. As many already know the Trojans used Ronald Jones as well and he was the more productive of the two.

Davis has good open field vision, he’s elusive and can make a man miss in space. He ran a 4.53 forty yard dash which is well above the league RB average and he benched 21 reps on the bench press which makes him one of the strongest backs in the class. The big problem with Davis is he will dance in the backfield too often and doesn’t take action when running the football like the other backs do. Despite all of that, Davis could make this roster with the new coaching staff and the unknown opinions on RB’s Malcolm Brown and Aaron Green. 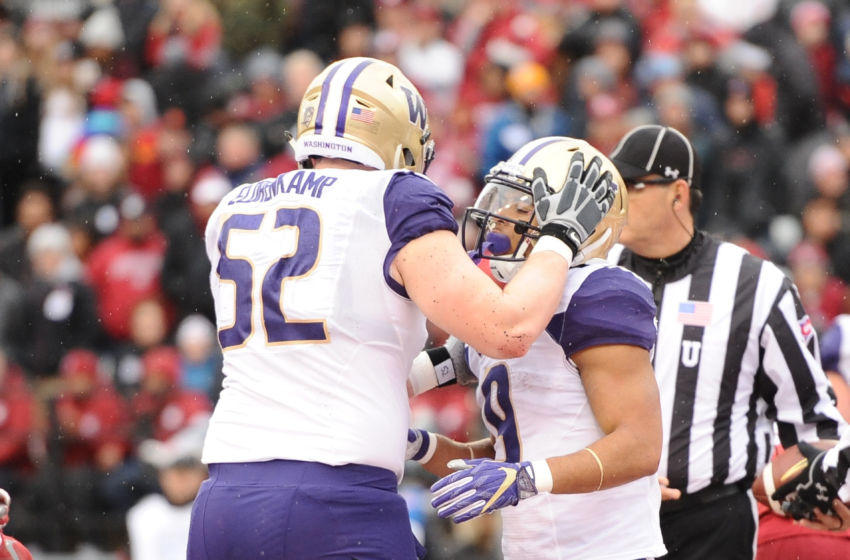 This is the mystery offensive lineman Les Snead mentioned that the Rams had been close to signing, but couldn’t announce it until it was official. The Rams had Eldrenkamp at a seventh round grade and the rest of the league had him around that grade too. He’s an athletic and thinner offensive lineman than many look for, but he also has the versatility to play center according to scouts.

Eldrenkamp was real good last year, he improved his pass protections, but the big knock on him was when he played against a good pass rush he struggled mightily. Eldrenkamp has the bend and smooth movement skills you like to see in an offensive lineman, but he has plenty to improve on.

This is a project that could make the 53 if Aaron Kromer has anything to say about it. Kromer might end up making this kid the starting center if he sees enough in his game. You are pretty much swinging for the fences on this kid, but without spending a pick on him the Rams will take that all day. 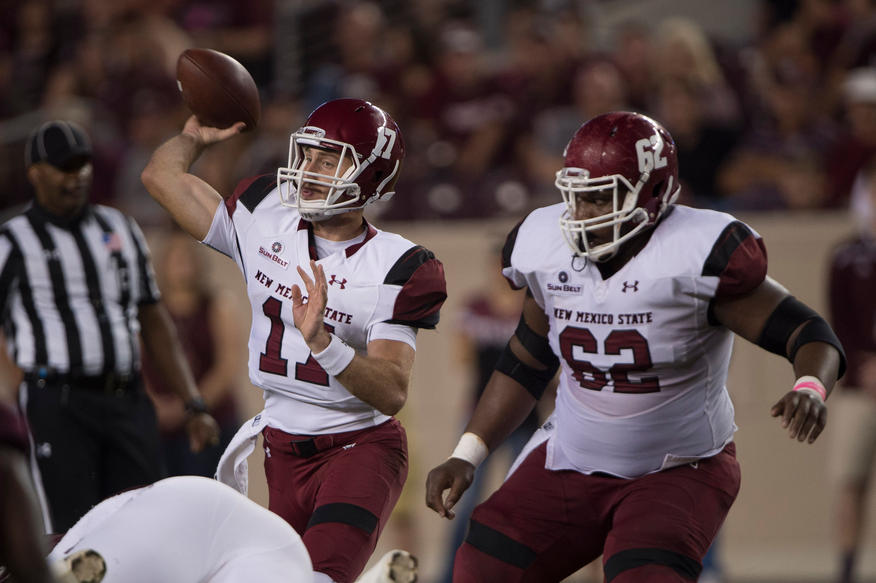 McMeans has been working hard to keep his family life moving along without a hitch. In an interview with Arrowhead Addict, he explained that his lease is up in May and is trying everything he can to keep him, his girlfriend and his child taken care of. He has been getting up early each day working out in the gym and after that he’s been going to work to be able to support for him family.

One interesting thing of note is that McMeans went through his pro day with patella tendinitis he had suffered in his pro day training. He wasn’t sure until after the pro day. The reason it is interesting is because McMeans has been knocked for his lack of speed in which he ran a 5.74 forty yard dash, but there is a possibility that he could have ran much faster had he not been hurt.

Emory Hunt of Football Gameplan loves McMeans and had this to say about him:

“Anthony McMeans of New Mexico State plays the position with passion and intensity. He may even be a very good guard prospect as a pro. He’s proficient in all aspects of the running game and he’s also above average in pass protection. Now, he does have a few athleticism limitations as far as defending quickness is concerned and climbing to the second level is where you can see some of that, but I do believe if he loses about ten pounds, he can definitely overcome those limitations. I really like his footwork in regards to the running game and his short area footwork also helps him in the blitz pickup department”

McMeans in my opinion has a legit shot to make the roster and play center for the Rams. 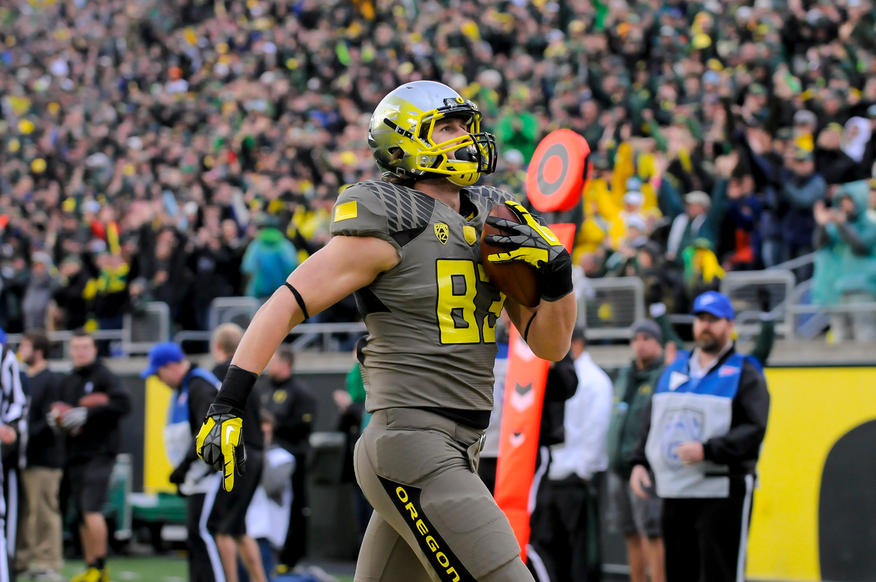 Mundt is a player that was one of the Rams 30 pre-draft private visits. Apparently the Rams must have liked him a lot. He posted some solid numbers at his pro day, running a 4.74 forty, 30 inch vertical and 21 bench reps. Mundt was originally a top prospect coming to Oregon that suffered an injury and knocked him down the depth chart in favor of fellow undrafted free agent TE Pharoah Brown.

Mundt is coming into a TE group that is loaded with young talent in Gerald Everett, Tyler Higbee, Temarrick Hemingway, Travis Wilson and Bryce Williams who all have less than three years of NFL experience. Mundt also wasn’t overly productive in college finishing with only 683 receiving yards and eight touchdowns in 23 games. 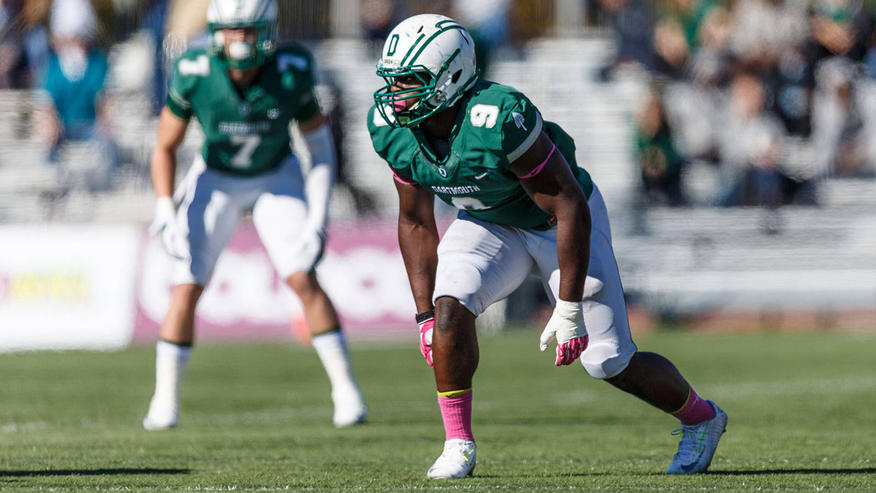 “Flo” as they call him, is the ultimate underdog at 6 feet. He ran a weak 40 yard dash at 4.92, but he had a nice vertical jump of 36 inches and benched 21 reps on the bench press. Flo isn’t just some undersized nobody though, he won the defensive player of the year award for the Ivy League and has a nice career.

He tallied 143 tackles, 35 tackles for a loss, eight pass breakups, 10 forced fumbles and 23.5 sacks in 40 games. Orimolade comes in and instantly brings experience as a captain and a man with his priorities straight as he already graduated two semesters early with a degree in economics.

He is going to have a tough time making the roster only because of how many linebackers are on the Rams squad right now, but he has talent off the edge and is quick footed with instincts like fellow Ram teammate and seventh-round pick Ejuan Price. He definitely doesn’t look like a 4.9 forty player on film that’s for sure. 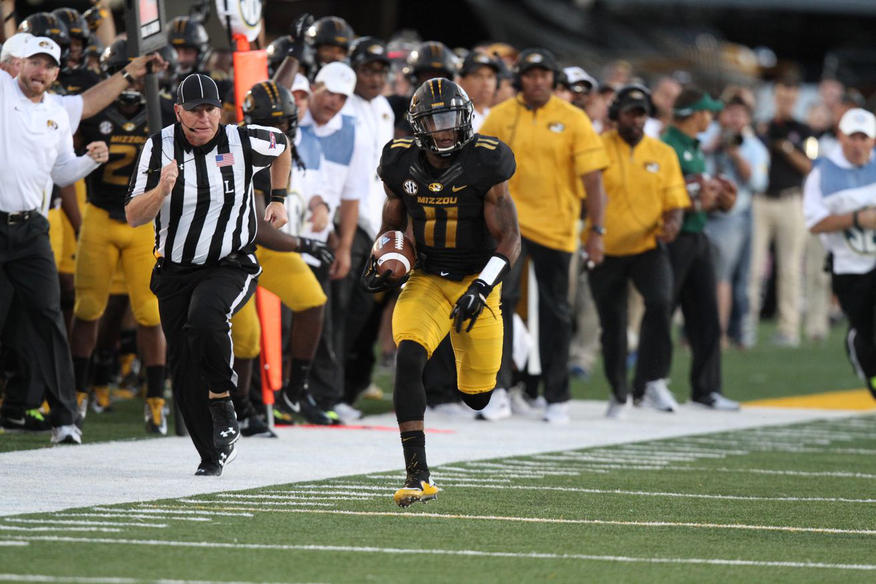 This Missouri Tiger is a ball hawk and makes that his mantra on the field. He doesn’t have great long speed at 4.61 in the forty, but he has soft hands that make interceptions come easy for him. He finished his career playing in 45 games and ending up with 153 total tackles, 7.5 tackles for a loss, 10 interceptions, one pick six and 31 pass breakups.

Penton is a lot like Gaines, but he lacks the cover skills against players inside the numbers that Gaines simply doesn’t. Penton has a hard time in one-on-one tackle opportunities and it shows by the amount of missed tackles you see on film. 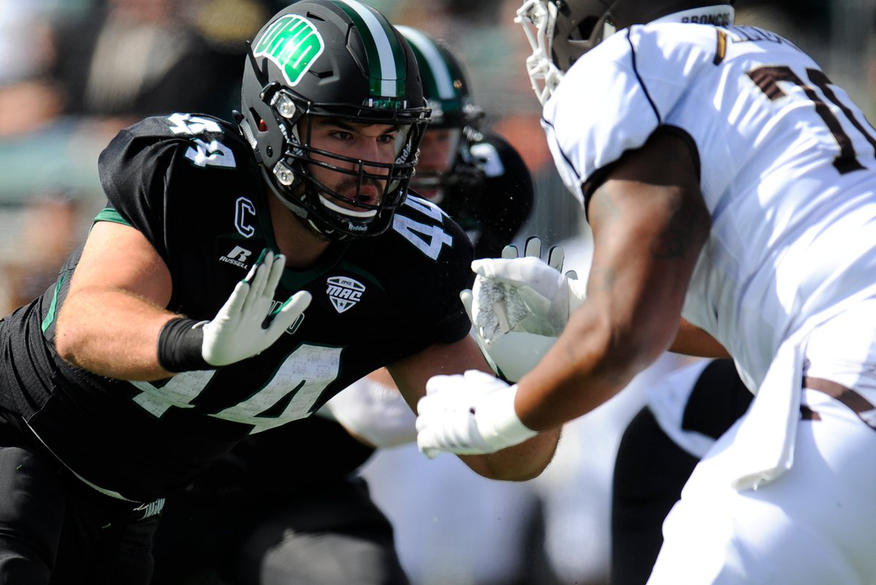 Sayles is a defensive tackles that can rip through the line and rush the passer. He doesn’t have the long speed you would like to see at his weigh, but he’s quick and deceptively fast when chases quarterbacks to the sideline. 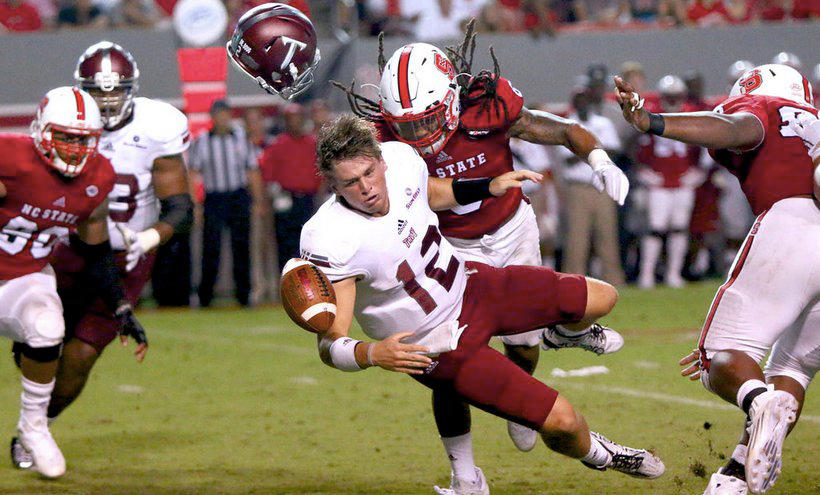 Wright is known for helmet jarring hits during his time as a member of the Wolfpack. Wright has the combo safety/nickel corner type of build that will give him some value to keep around in camp.

He is likely going to have to prove himself on special teams since he doesn’t really have the skillset the other safeties on the roster possess.