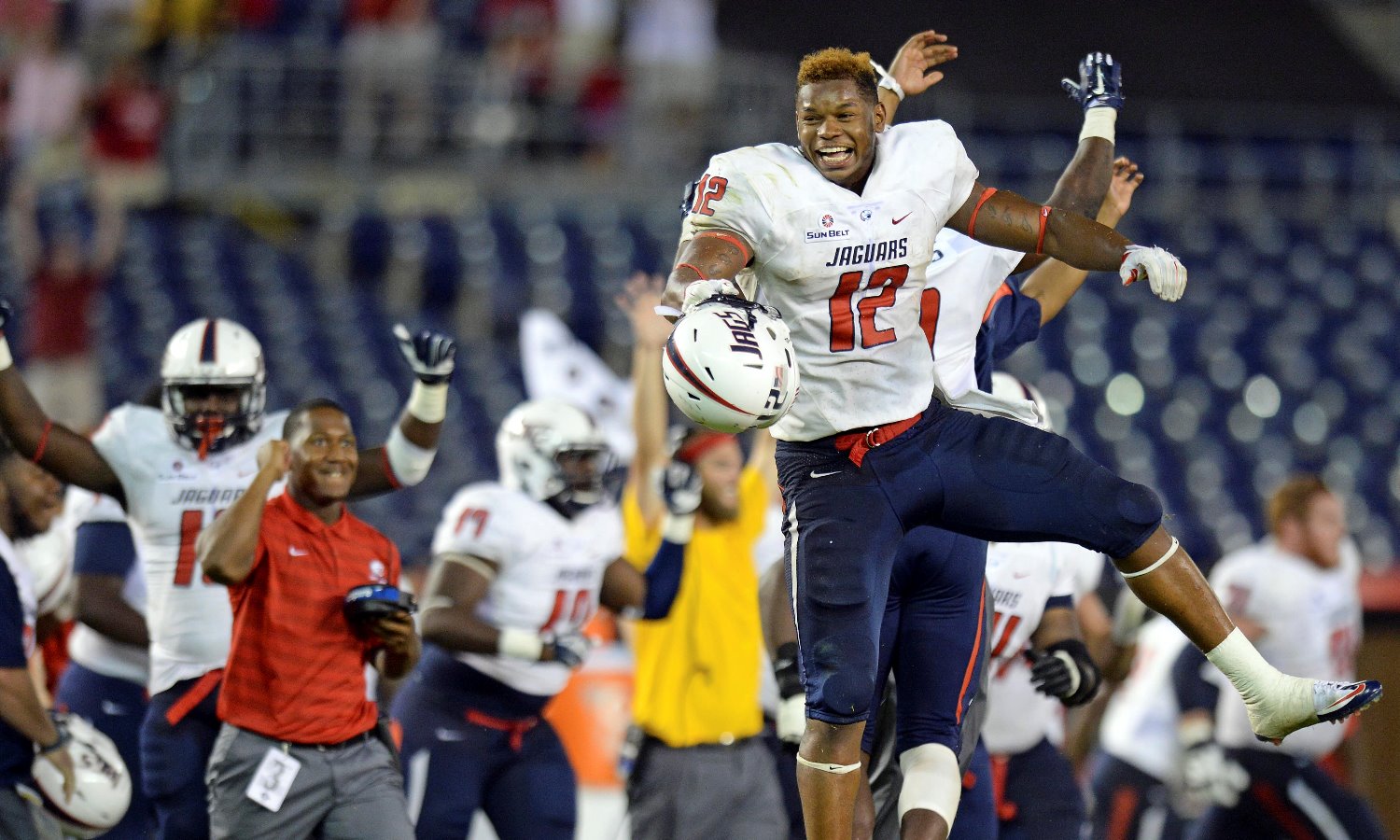 Draft day two is in the books and the Rams have now added three new former college players to their roster. We will break them each down with what they bring to the table, who the Rams left on the board leading up to the selection, the draft grade and player comparisons. 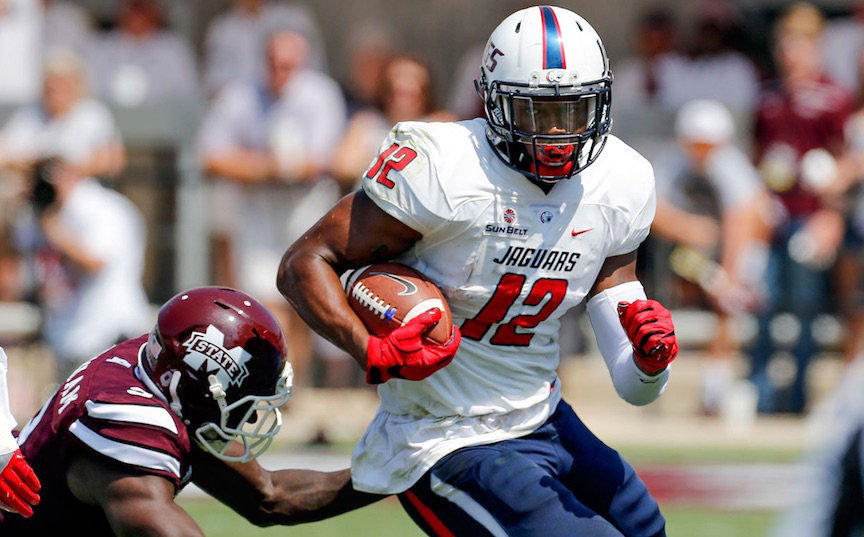 Let me just start off by saying this shocked me, I heard rumblings that they were very interested, but had no idea he was that high on their list. With Everett you are getting a great player, but I did not like how early they picked him. The Rams originally passed up the opportunity of picking first round talent that can play every position on the line in Forrest Lamp. Instead he went to the Chargers and the Rams traded down with the Bills making a nice move to recoup a third round pick in exchange for a fifth. It was an overall good move.

Now looking at Everett’s game, Sean McVay sees him as his version of Jordan Reed. Everett was reportedly rated one or two on their board at the tight end position. Everett is not a great blocker, but he has the strength to do it and more so has the potential to grow in that area. With McVay, you are looking at a former tight ends coach that will be able to teach Everett the fundamentals and the proper technique to be a well-rounded blocker. What you like about Everett is the fact he is a tough and athletic player with or without the ball in his hands.

Everett ran a 4.62, benched 22 reps on the bunch press, and had a 37.5 vertical jump, well over 10 foot broad jump, 6.99 second three-cone drill and a 4.33 in the 20-yard shuttle. He is a freaky talent and is considered an Evan Engram consolation prize. Although, Engram lacks the pure strength and toughness that Everett gushes.

He can come in and right away offer the ability to be an instant impact player for Jared Goff and Sean McVay on day one. Everett and Higbee will likely run a split TE set and maybe even three TE set as confirmed by McVay. Everett is faster and stronger than any tight end on the Rams roster. To be quite honest Everett is a total freak and while he did run a 4.62, that is real good for a TE. Everett will be able to flex out wide, play inline and h-back. The Rams get themselves a real nice weapon in Everett and Goff has to be happy about it.

Grade: (B-) I gave it this grade because I felt like the Rams could have traded down again or taken him later on. There were definitely other guys there, but there is no denying the talent he possesses so he gets a B-.

Who I would have taken: Tyus Bowser, OLB, Houston 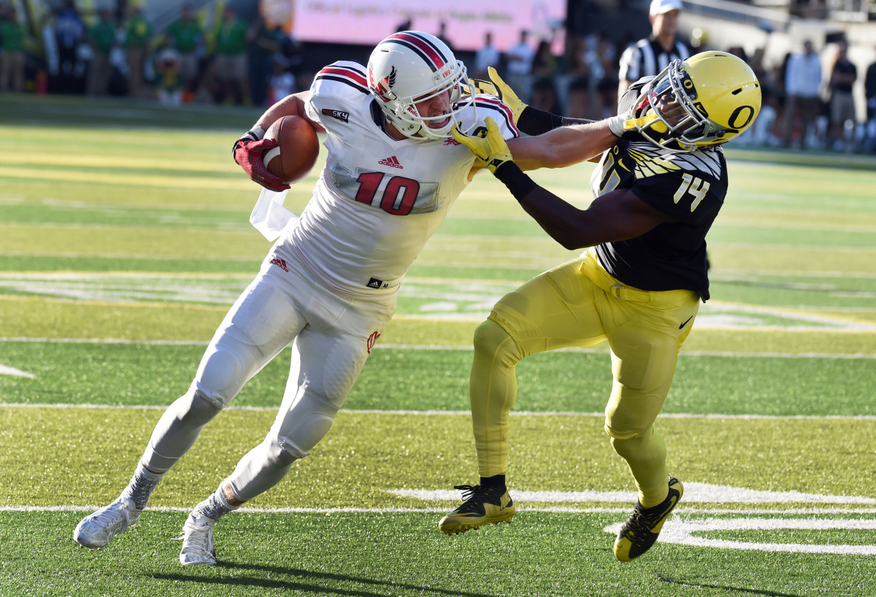 The Rams get another day one instant impact starter in Cooper Kupp. Kupp, was a little bit of a surprise, but I had a feeling they were taking him over my top WR available Chris Godwin. Kupp is older than Odell Beckham Jr. and he’s the most polished receiver in this class. There isn’t really a weakness to his game besides the fact he ran a 4.62 which is below average for a wide receiver. Kupp brings versatility to the Rams receiving core as he can play both inside as a slot receiver or outside as a No.1 or No.2 receiver.

Kupp has ideal height at 6-foot-1 and he is just over 200 pounds. One thing I have always liked about Kupp going back to when I studied his game film was his ability to catch everything thrown his way, he doesn’t drop any passes, he makes sharp and quick cuts in the middle of the field and is an acrobat who dives and puts his body on the line to make the grab.

Like I said, I wanted Godwin so that hurts my grade of this pick a little bit seeing as I felt Godwin had the higher ceiling and was a better prospect, but I will say that Kupp is going to be a confidence booster with Jared Goff. He is going to give Goff the feel good confidence to throw all over the field to him because he will know that even when Kupp is covered he is going to be open. Rams landed another really good player in their first two picks.

Grade: (B+) This gets a grade of a B+ because simply there was a higher rated WR on my board that they passed on. Kupp is still a great addition and the Rams did well in getting Goff some weapons to work with.

Who I would have taken: Chris Godwin, WR, Penn State

Player Comparison: (Keenan Allen, WR, Los Angeles Chargers) Kupp is a carbon copy of Allen, can win on the inside and outside, fell in the draft because of their forty times, both have ideal size for the position, both have great hands and both can fight for the contested catch. 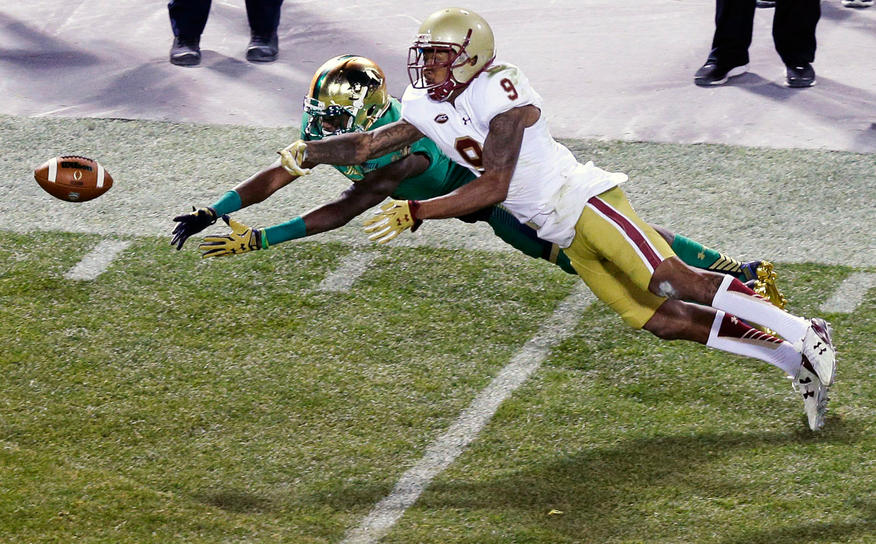 The Rams as previously mentioned traded down at the top of the second round and acquired the 91st pick in the process. They used that pick on in my opinion the biggest reach quite possibly of the draft. John Johnson is a defensive back from Boston College that is versatile, he can play either safety or corner in the NFL.

He’s a former three-year starter at corner that they moved to safety and the Rams reportedly had been targeting him for quite some time. He’s a player just like Kupp that took a pre-draft visit with the Rams and they really liked what they saw. I think this is in all honesty the worst pick in the last half decade as far as an initial reaction. That’s not to say he can’t play and we won’t show up and play well, but I feel like if you truly wanted this guy that badly you could easily have traded back into the fourth round and grabbed another pick.

What does Johnson bring to the table? Well, I mentioned he was versatile, but he is a guy that can instantly come into a special teams unit and compete since he played some real good special teams at BC. He has some real loose hips that allow him to improve and shows that he has some potential there. He’s a player that will go and jump in front of a route and make a big game-changing interception. However, what I don’t like about this pick is the fact you could have got him easily in the fourth and maybe in the fifth. He is a bad tackler, he’s a slow safety running a 4.61 and he really doesn’t put all his body and his leverage into his hit with cause’s guys to bounce off him often.

Johnson, I just don’t see him playing a ton early on, the Rams oved LaMarcus Joyner to free safety, the have Cody Davis, Brian Randolph, Marqui Christian, Isaiah Johnson and likely Blake Countess at the position. I don’t get this pick, but at least they knew about him and did their homework, it sounds like the coaches just love the player and feel like he can be a stout player at the next level, I just saw that there were better players and you could have picked through a crop of safeties that have some impressive day three talents in Fish Smithson from Kansas, David Jones from Richmond, Montae Nicholson from Michigan State and even Rayshawn Jenkins from Miami who all would have been better picks for the value.

Grade: (D) Too early for this player, there were much better talents on the board and there are more valuable talents at the position on day three.

Who I would have taken: Desmond King, CB/S, Iowa

Player Comparison: (Micah Hyde, S, Buffalo Bills) Both players have great versatility and the ability to make significant plays on special teams, but both are not elite safeties or Pro Bowl type safeties. I like Hyde a lot, but I wouldn’t spend a third rounder on a guy who is lacking in too many areas early on.

Overall day two draft grade: (C) The Rams got some starters, but the grade goes down to a C because of the fact John Johnson was a reach. The Rams arguably may have reached on every pick, but they were two great players that were only slight reaches. The 91st pick the Rams used on a guy that wasn’t even ranked by Pro Football Focus. With a C to their report card and the rest of the division hitting some home runs. The Rams need to finish strong today on day three.

What are your thoughts Rams fans? How do you grade this draft? Let us know!