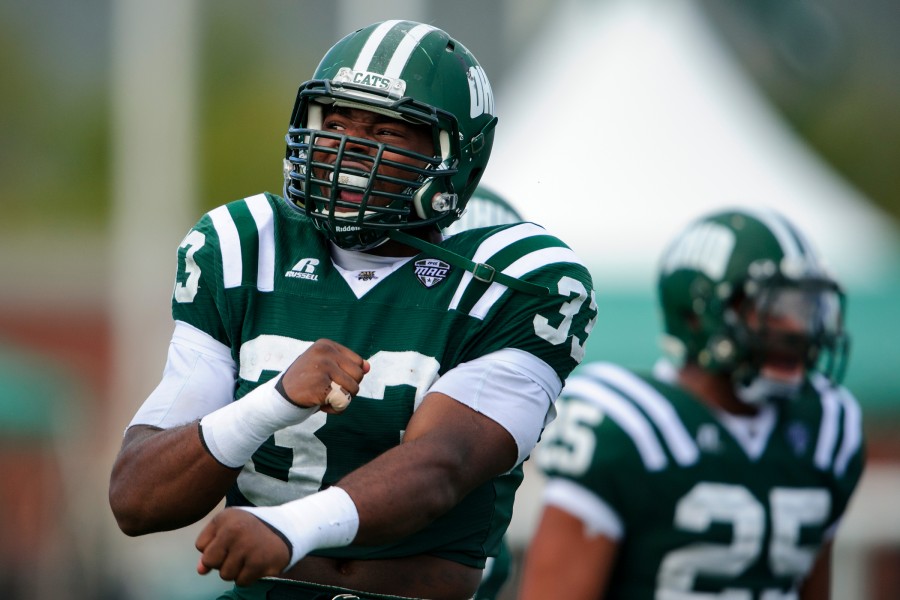 The draft buzz is growing, the impatience is rising and finally the NFL draft is almost here. Now I bring you my final Rams mock draft of the year and with this mock there are going to be some definite shakeups throughout. We have seen free agent signing of CB Nickell Robey-Coleman lessen the need for a cornerback and at the same time we saw a waiver claim of Tre’ Jackson backfire due to a failed physical. While my co-writers here at Downtown Rams all came out with their final mock last week, I have been waiting till everything settled down to bring you my final mock draft the week of the draft. 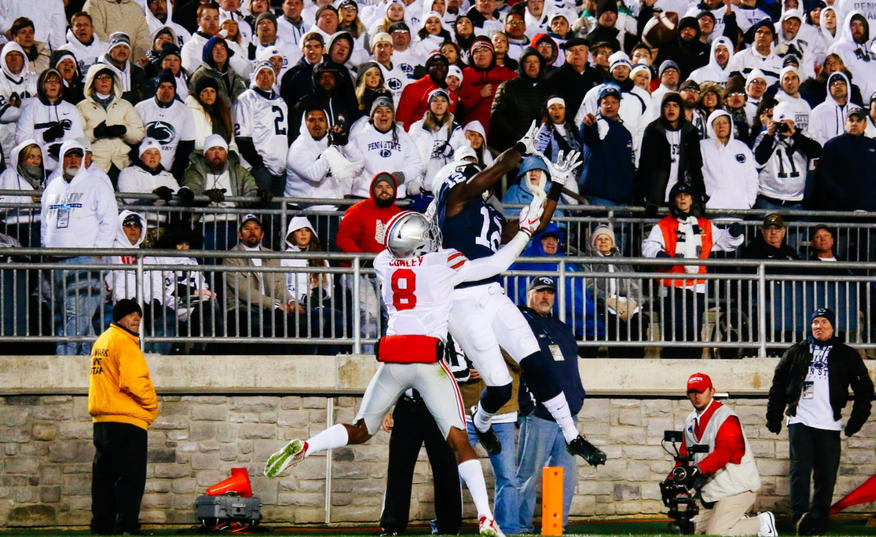 I ended up holding on to Godwin as the first pick of Sean McVay’s tenure for practically the whole post-season pre-draft process. Godwin is just too skilled to pass up for me. I graded him slightly above the likes of Zay Jones and JuJu Smith-Schuster and I feel as though Godwin does too much of everything to not pull the trigger on him. What really opened my eyes to Godwin was his combine performance. We all watched the exciting Rose Bowl game between USC and Penn State and we watched as USC started off the game dominating, but then slowly started to deteriorate only to eventually take the lead in thrilling fashion. Godwin was the number one thing I remember about that game and while I am a fan of USC, it’s quite evident he is the better prospect over JuJu Smith-Schuster. I am actually expecting this pick to be guaranteed a receiving prospect in some manner whether it is Godwin, Jones, Smith-Schuster or even Evan Engram. I feel as though Godwin I have rolled with for this long and can’t get off the bandwagon now. 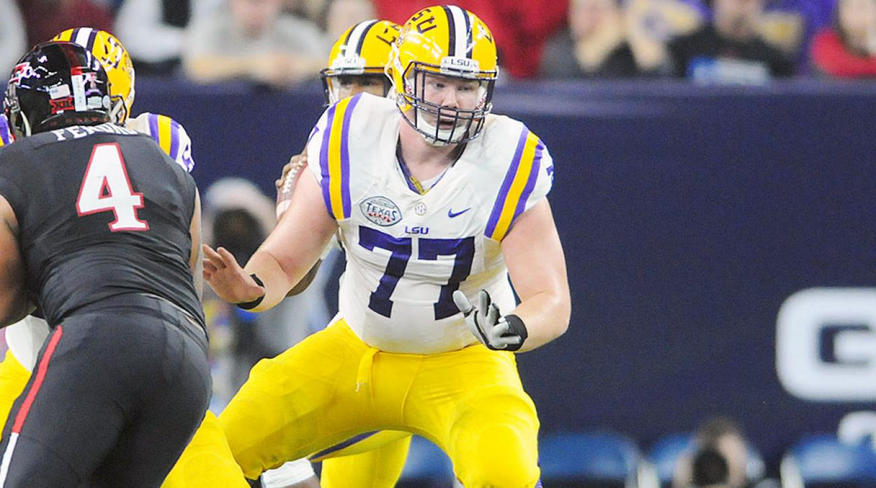 I am officially back on the Ethan Pocic train after a quick hiatus? If you want to call it that…Pocic to me is too good to pass up in the third round. I went back and forth with Jalen Tabor and many others here but I feel as though Pocic makes tons of sense. This man runs like a gazelle and is effortless in getting to the second level which will help out Todd Gurley a ton. Pocic in my opinion can start right away and I believe he would beat out John Sullivan by the end of preseason. Why is Pocic falling here? I will answer that question, the reason for his and Pat Elflein’s fall are due to the fact that Forrest Lamp and Dan Feeney both have the versatility to play center and teams like them better. That is the reason and instead of complaining how that is unfair just be happy the Rams land a blue collar prospect in Pocic. I will say this, if you feel this is a bad move because the Rams have Sullivan you are wrong in that regard Sullivan will give the Rams an average starting presence with veteran leadership but Pocic is the future for the Rams. 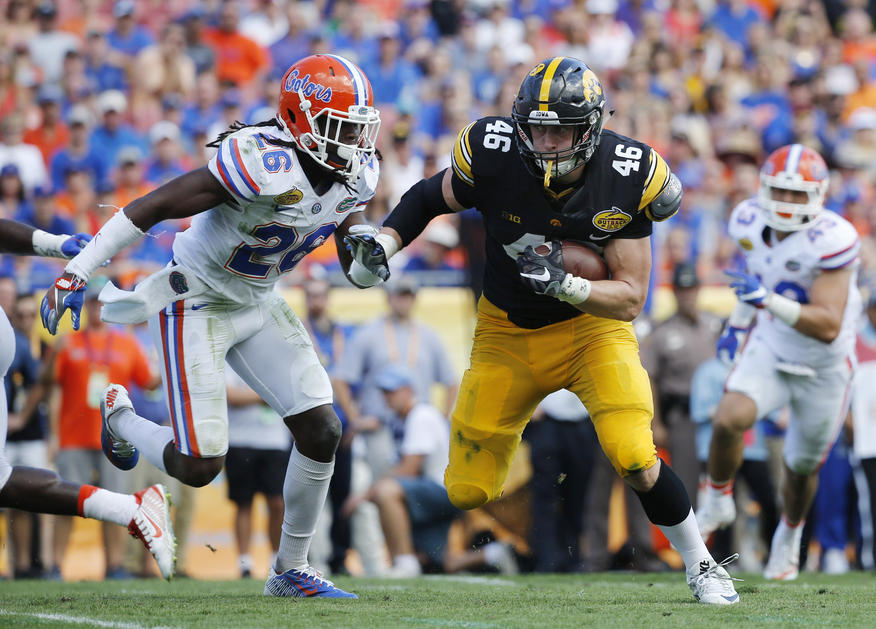 My love affair for Kittle is justified and I have proven that to my readers over the last month or so. George Kittle is the ultimate sleeper of the NFL draft and would fit in like a glove with Tyler Higbee in Sean McVay’s offense. I had the privilege of talking to Kittle himself and he said the Rams talked to him at the combine, he also believed he himself would fit in greatly with McVay’s system due to the fact he can bring all the versatility to the table and the main fact at Iowa they ran a pro-style offense. Kittle embraces total annihilation of his blocking assignment, but he doesn’t stop there. If you forget down the road how athletic he is…he can gash you for a huge gain with his 4.52 speed. Extremely underrated prospect and I want to complain for this guy, but if him being low profile gets him to the Rams in the fourth I’m golden. This is a type of player that is a culture changer and you want these players on your football team. 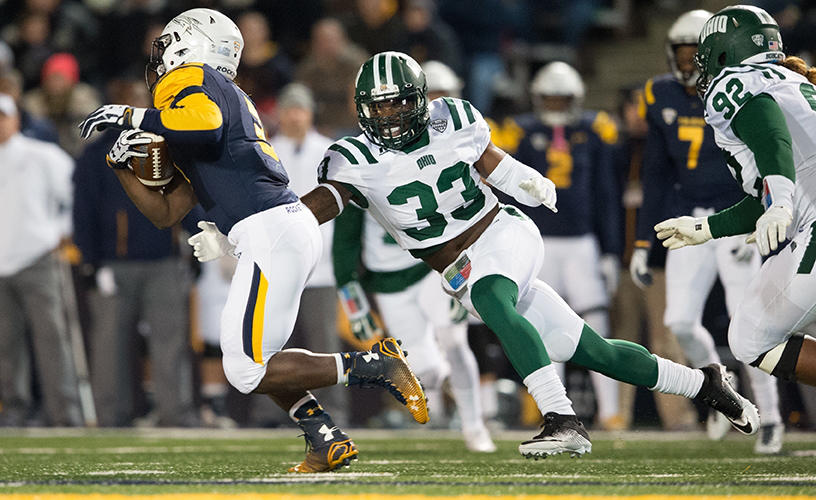 I may be a little late to this guy, but the fact is I want Blair Brown to be wearing horns come 2017. You may have just taken a gander at his height and weight and rolled your eyes, but make no mistake this kid can flat out play. This is a kid that you know if he’s anywhere near the ball-carrier he is making the tackle. He is very efficient in that department, he is an extremely intelligent and instinctive player. Brown’s game can be summed up in this phrase “find the ball, see the ball and get the ball”. Brown is always making plays around the football he has the athleticism, toughness and high motor to really give him a look earlier in the draft, but I think his height will keep him from going where he should. This is a player that has clear sideline to sideline burst and is explosive right off the snap. The Rams may not know what to do with their linebackers, but Brown is much too talented to pass up and Wade Phillips shouldn’t have a problem finding him playing time. 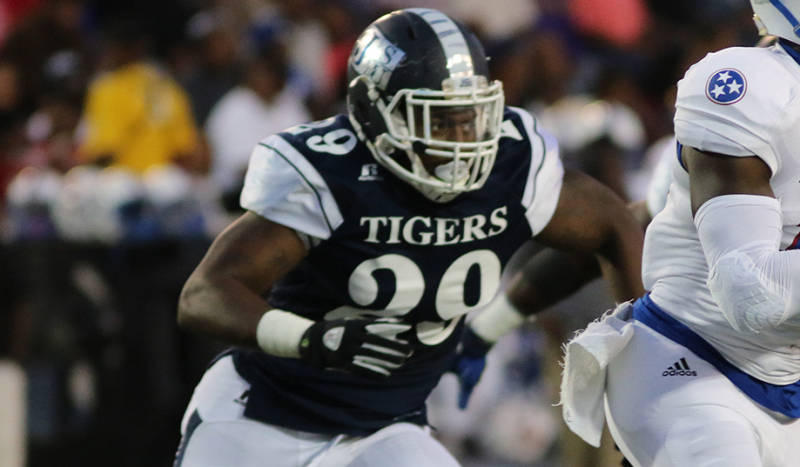 Here is another sleeper I love and had the pleasure of speaking with. Javancy Jones is an absolute leader and scouts rave about that portion of his game. I have been trying to get the Javancy Jones to the Rams bandwagon going as you may have seen, but time will only tell if it works out. Jones has really been building steam to be picked higher than people believed he could go in the draft. I really like the idea of picking Jones to give you a player that is similar to Markus Golden. Jones will likely not start over Robert Quinn or Connor Barwin but would be perfect in a rotation like Phillips has used in the past in Denver with Von Miller, Shane Ray, Shaq Barrett and DeMarcus Ware. Jones has the ability to diagnose a play quicker than almost any outside linebacker in this draft. He plays with great leverage and gets low enough to dip under offensive tackles. He is going to bring a high intensity nature to the field every snap he’s on it for and he is extremely violent with the potential to force plenty of turnovers. This is a player that may not seem like the sexy pick now, but down the road these are the guys that scouts are comparing incoming sleepers to. Watch out for Javancy jones. 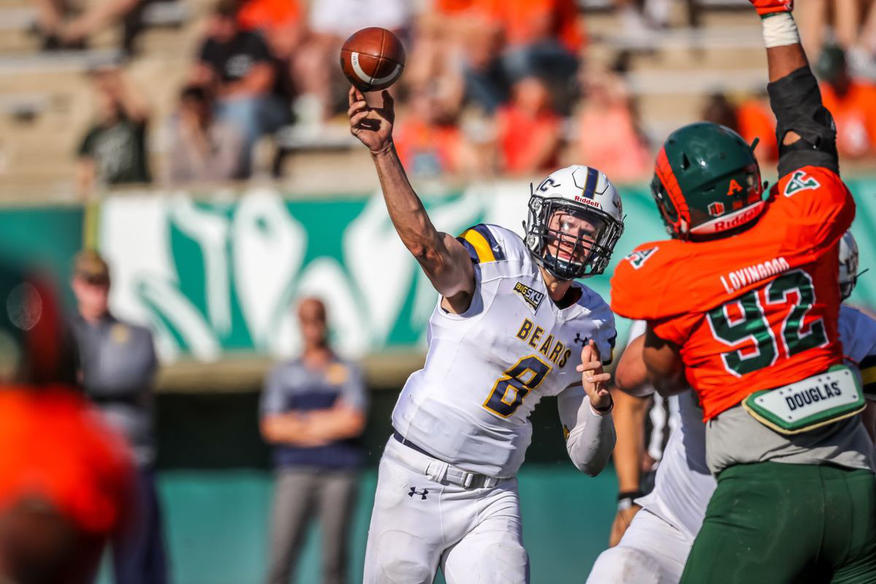 And there’s the quarterback appearance again. I went away from it for a while, but I just couldn’t resist this time around now that I have done all my research and watched all my film. I feel like Kyle Sloter is going to be the perfect developmental quarterback prospect. There are other players like Phillip Walker and David Washington in play here, but I ultimately believe that Sloter is the best fit to be the insurance to Jared Goff. I like the Rams quarterbacks at the moment, but think about it. Last year the Redskins took Nate Sudfeld to develop behind Kirk Cousins. Well now Cousins isn’t guaranteed to sign long term and Sudfeld might have to be the starter next year for the Redskins depending on what happens. Now of course Cousins is established and that’s evident by now, but with the Rams they are looking at a QB they have mortgaged the future on in Jared Goff who isn’t a guarantee. I like Goff and I believe he will be fine, but you need to prepare for anything in this business and that is just what this pick does. You can likely trade one of Sean Mannion or Aaron Murray and possibly recoup another pick, but I feel as though McVay is going to want to select his own QB and Sloter seems like the perfect low key steal in the sixth round. He has a great arm, he is as mobile as they come running in the 4.6’s and he’s got a serious knowledge of the game of football. This would be a great pick for the Rams as he compares similarly to a mixture of Jimmy Garappolo, Tony Romo, Carson Wentz and Derek Carr. 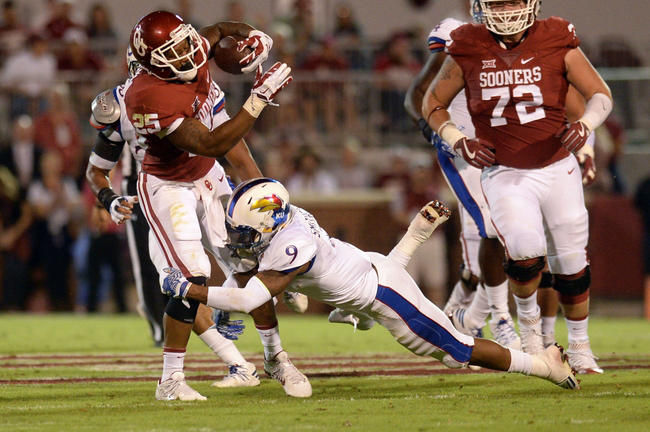 Another player that is just a leader on the football field and a high character in Fish Smithson. I believe you are now starting to see a trend here of the talent that I feel the Rams should and could go after. McVay has adopted a “We not Me” slogan and grabbing players like Smithson, Jones, Sloter, Brown, Godwin, Pocic and Kittle show that this draft class is full of high character and passionate football players. Smithson isn’t the freakish athlete that many want in the next free safety for the Rams, but he is a player that is extremely instinctive and led the FBS in solo tackles. He is a sound tackler and is quite the ball-hawk as well. Smithson played on a Kansas team that found themselves down more often than not, but regardless of the situation Smithson never lowered his effort. His is a guy that will give you his all no matter what the cost is. He truly believes in being a teammate and being a leader and a role model and that is another type of player you want on your team. Its worth noting Smithson has the ability to slide into the cornerback position showing off his versatility and added value to a team picking in the sixth round. 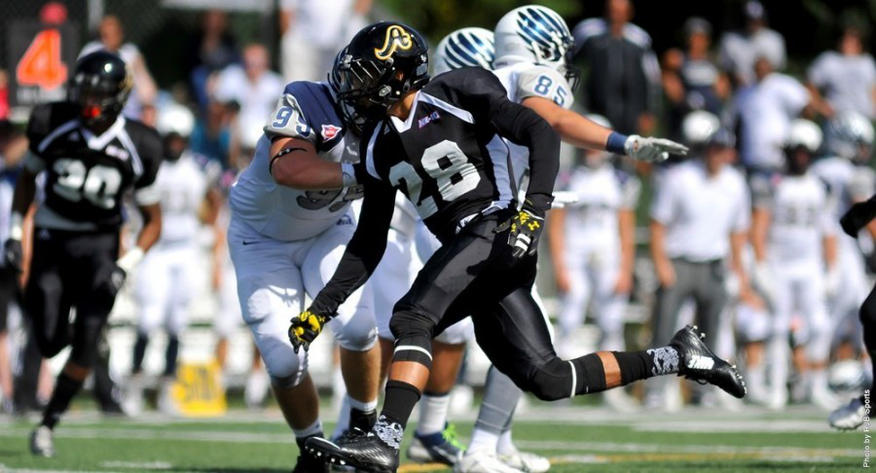 Last but not least we have DaQuan Holmes who is quite possibly one of the absolute top division two stars in this draft. Holmes has met with the Rams multiple times so the interest is clearly there. He is a very intelligent player and person so right off the bat you are getting someone in the seventh round that probably studies more game film than day two picks. Holmes has a knack for utilizing his anticipation and awareness and stepping in front of a pass. He is a model of consistency in the interception department as well as the tackling department. Holmes ran a 4.45 at the Harvard pro day he attended and showed off his ambition to go out of his comfort zone and get his name out there for the rest of scouts. This kid is the real deal and there is a reason why the rival 49ers privately visited him. Holmes may likely go a round or two higher, but there is a possibility the Rams could steal him in the seventh round. Holmes makes a ton of sense here because the Rams aren’t really lacking at cornerback and do not need to spend an early round pick, so they are able to bolster other positions depth and select a cornerback who could prove to be a division two diamond in the rough like I believe he can and quite possibly end up like his favorite player and his pro comparison Malcolm Butler.

Trumaine Johnson off the trading block