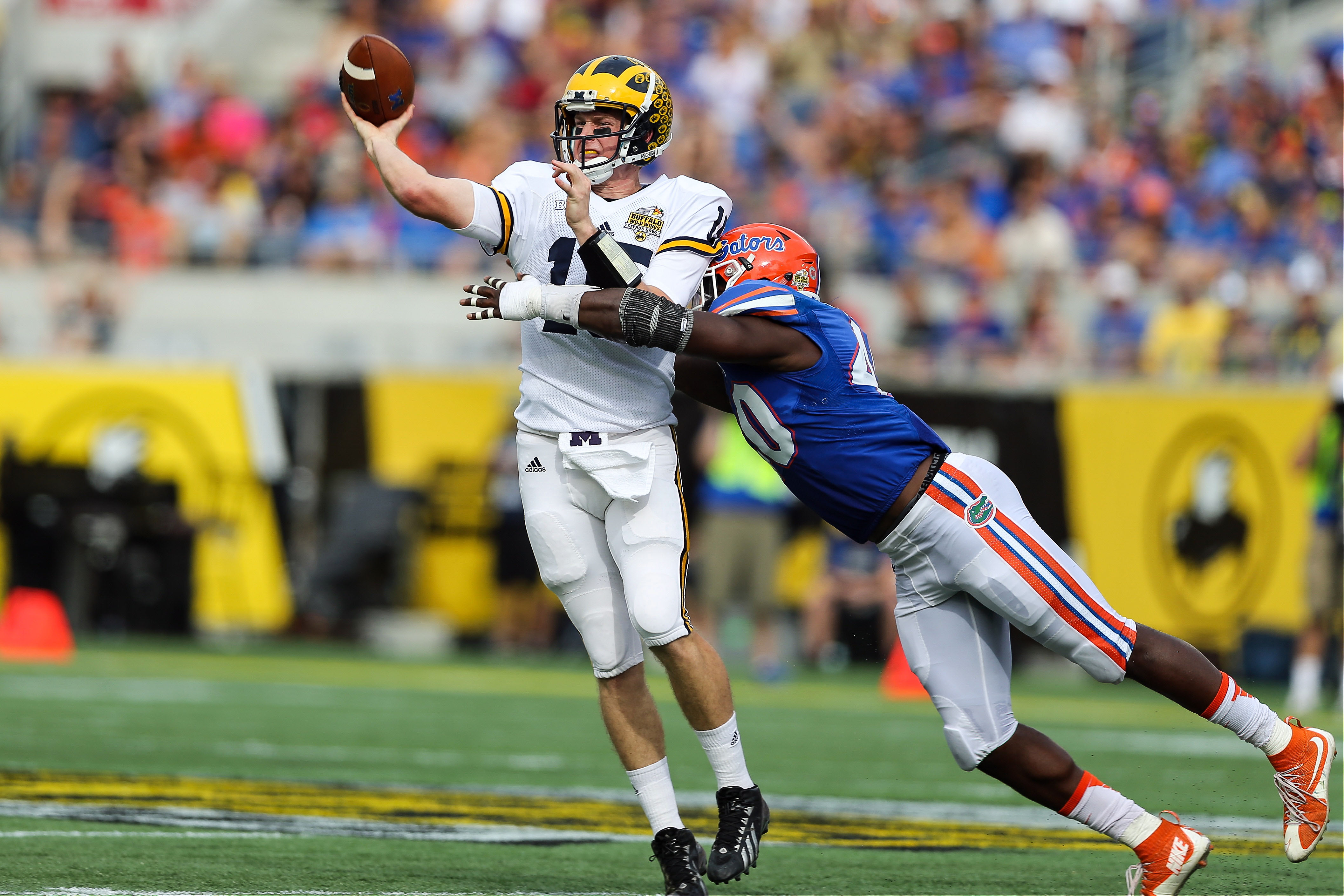 In this next scouting report we take a look at the defensive side of the ball and inside linebacker Jarrad Davis from the University of Florida. Now, given that the Rams have had the worst offense in the NFL over the last two years, it seems odd to draft defense with their first pick. However, with a difference maker like Davis, going defense would be the right move.

Davis is one of the best linebacker’s in this year’s draft behind Rueben Foster of Alabama. During his time at Florida he solidified himself as a leader and doing whatever it took to get on the field. Davis worked his way up on the roster throughout his time as a Gator. As a true freshman he stepped in to become the team’s MVP on special teams. By the time he was a junior, he was starting and making an impact. He had 98 tackles, 11 of which were for a loss and he had four pass breakups. The Florida linebacker has struggled with injuries throughout his career missing three games his sophomore season and again missing four games last season. That leg injury extended to the combine where he wasn’t able to compete. Despite the injuries, Davis is a guy coaches want in the locker room. He’s a hard worker, a leader, and willing to do whatever it takes for his team.

Had Davis ran his 4.56 time at the combine like he did on his pro day, it would have registered as the fastest 40-time among linebackers. I’ll get to it next, but Davis has excellent closing speed and acceleration that will make him a weapon if called to blitz. In the case that he’s not, he’ll be able to keep up with the NFL tight ends and running backs in coverage.

In a division dominated by Russell Wilson, it’s key the Rams have the athleticism with their front seven that is able to keep up and track down the mobile quarterback. Getting back to that closing speed I was talking about, Davis does just that. In these next two plays you’ll see what I mean.

Here you can see Davis disguises himself as a blitzer, but in reality is playing a spy role. He has his eyes on the quarterback the whole time. He sees the play break down and leaves the quarterback no chance of an escape.

In this second play, the Alabama quarterback has rolled out to his left, and Davis has came over from being in coverage and is all over it. This play is called an incomplete pass, but you can see just the incredible closing speed from the Florida linebacker that helped give his team a championship caliber defense.

Davis is far from perfect in coverage, but with his speed and athletic tools, he has the potential to get better with good coaching. Not many linebackers have the tools to be able to keep up with the league’s fastest running backs and tight ends. Davis does, which that in itself makes him valuable to a defense.

In this play Davis is responsible for the receiver in the slot. Once again you see that closing speed as well as anticipation. Davis should have had an interception returned for a touchdown, but he does earn the pass breakup.

Here you see Davis keeping up with his man down the field once again breaking up the pass. Earlier we saw what he can do close to the line while spying the quarterback, but here we see he also has the ability to hold his own in coverage.

Because of his speed and ability to see and read the field, Davis is excellent when it comes to making his way through blockers. Watch the following two plays.

I love Davis’ motor. He’s absolutely relentless. Here you do see that as well as him shed his blocker and get to the ball carrier. He doesn’t get stuck on his man. He works his way through the block and makes the stop.

This play comes on a series of two plays in which Davis makes back to back stops at the goal line. You see Davis shoot the gap so fast the man who was supposed to block him looks around after the play wondering where he went. The ball carrier stands no chance and gets tackled for a loss.

From what I’ve seen of Davis he doesn’t have a lot of weaknesses. With Davis you get the player with the potential of Foster, but don’t have the off the field and character issues to worry about.

Davis’ lateral movement is slow here and there and at times he plays too aggressive. Neither of which can’t be fixed by coaching. Those are the on the field weaknesses.

Off the field he has nothing against him aside from the injuries. In four seasons, Davis missed games in two of the three seasons he saw significant playing time. Some players are injury prone. That may not be Davis, but right now he doesn’t have a good record.

It’s hard to predict where Davis will be drafted. How much will teams look at his injury history? He could go as high as the middle of the first round or as late as early-mid second round. If I had to guess somewhere in the late first or early second round. A team like the New York Giants could try and trade down to grab him.

Wagner is 6’0, 241-lbs and comparably matches up to Davis size-wise. Rams fans know what Wagner can do and has done at the NFL level. While undersized, Wagner does everything very well just like Davis. Also of note, Wagner was drafted in the second round.

It seems weird to want to draft a defensive player when the Rams are desperate for offensive talent. They are a team that as ranked dead last in nearly every offensive category over the last two seasons.

However, the Rams do have a lot of holes and not all of them are going to be fixed in one offseason. They are a team with eight picks, if they stand pat and take the best player available, they’ll be fine.

If that best player available is Davis, it would be hard to be too disappointed. Aside from Ogletree, the Rams don’t have a linebacker on the inside that has true starting ability. Josh Forrest and Corey Littleton are solid when it comes to being depth players, but ideally you don’t want them to start.

Davis can step right into the middle of the Rams’ new 3-4 defense and give the team a solid duo between he and Ogletree. The Florida linebacker would be a great pick for the Rams if he falls to them in the second round.