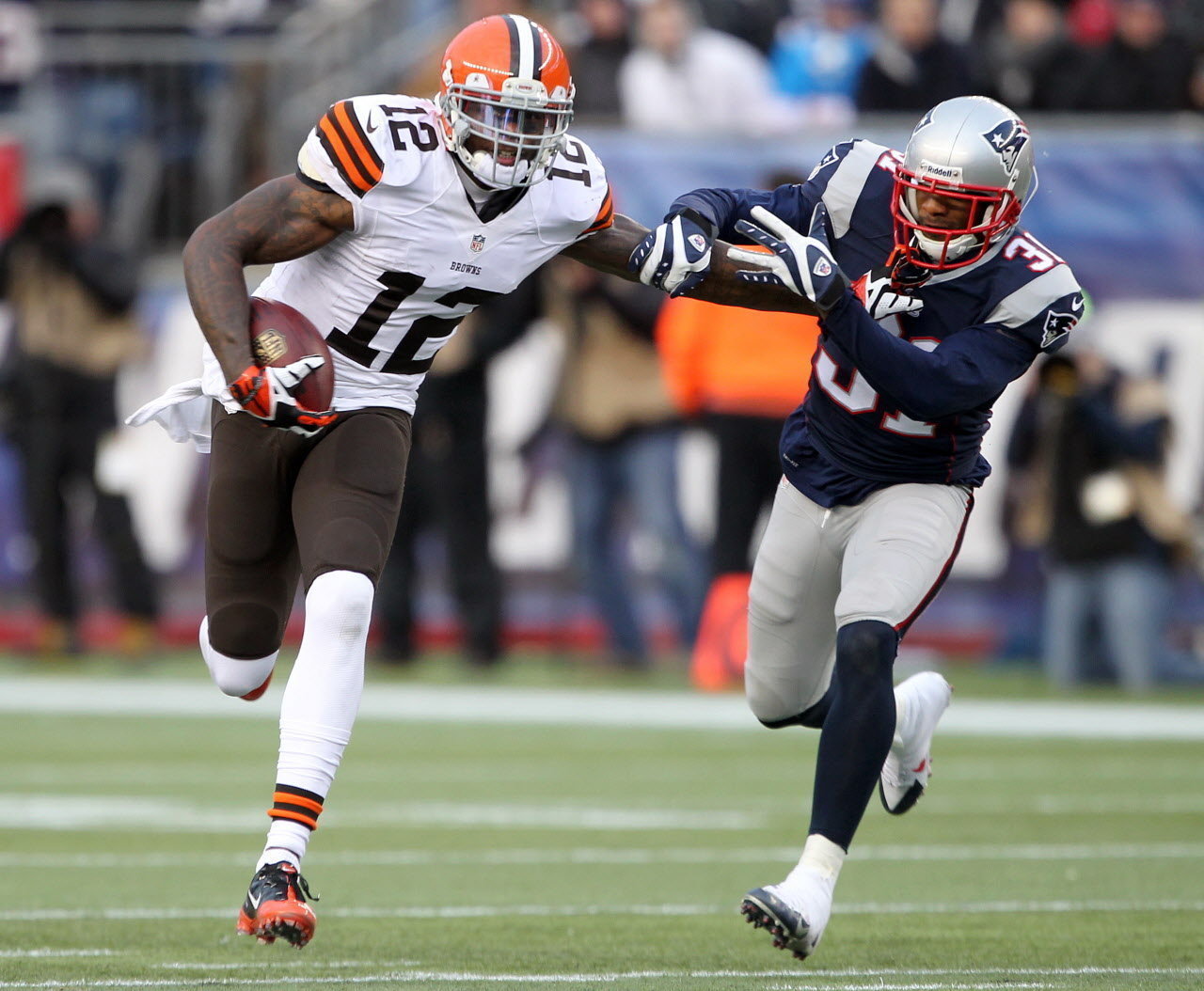 In 1972, the UNCF endorsed a slogan,”the mind is a terrible thing to waste.” I certainly can gamble that many of you readers may in fact just believe that I’m waisting my thoughts on this current article. However, trust me with this one, on why Josh “Flash” Gordon can serve as a immediate upgrade to our receiving core.

Gordon has a very intriguing, but peculiar story with his path to the National Football League. Gordon would be subjected to off the field issues during his sophomore year at Baylor University, when he and teammate Willie Jefferson, were found sleep in a vehicle in a nearby Taco Bell drive thru . Police were notified and responded to the fast food establishment and to find Jefferson with possession of marijuana in his vehicle. Baylor immediately dismissed Jefferson from the program because of his second violation, however, the program only suspended Gordon from the team. Seven months later, Gordon was dismissed indefinitely by head coach Art Briles, for failing a drug test, and testing positive for marijuana. The next following month, Gordon would transfer to the University of Utah, where he sat out the entire 2011 season with the intentions of turning pro. Unfortunately, he would missed the date, and declared late for the 2011 Supplementary Draft.

The Cleavland Browns would select Gordon the next season in the second round of the 2012 Supplementary Draft, inking him to a four year $5.3 million contract. Gordon finished among the top rookie receivers of the 2012 draft class where he grabbed 50 receptions for 805 yards and five touchdowns.

The 2013 season, turned out to become a feast or phantom year for Gordon. The NFL suspended Gordon for the first two games of the the regular season due to violating the NFL’s substance-abuse policy. He served his suspension and returned to take the league by a storm. In his second NFL season, not having a personal  career season, he also were setting NFL records pushing him as a front-runner for the leagues MVP. He would take the opposing team secondary by creating tremendous mismatches for the teams secondaries. Gordon set  NFL records in Weeks 12 and 13 of that season catching 237 receiving yards and 261 yards the very next week. This was the first time this accomplishment had been achieved in the NFL history of any wide receiver to having back-to-back 200-yard receiving games. Jerry Rice, Calvin Johnson, Isaac Bruce, Torry Holt, Julio Jones, Tim Brown and Andre Reed to name a quite few never accomplished this milestone in their long NFL careers. Gordon accomplished these record setting games in just his second NFL season.

Gordon’s 2013 final season statisics that’s posted below display his monstrous season, bare in mind that he missed two games due to suspension. If not for the suspension, Gordon would have broken Jerry Rice NFL receiving total of 1,848 with the chance of first player to gain 2,000 receiving yards in a single season:

Gordon’s playing career took a pivotal turn for the worst, the next couple of years, by not only receiving suspensions from the league for his second violation of the substance abuse policy, arrests for DUI’s, and failing to respond to multiple subpoenas issued to him. The subpoenas were related to a paternity suit brought by a former companion who claimed that Gordon was the father of her one-year-old daughter. She repeatedly sought for child support from Gordon but remained unsuccessful. It appeared that Gordon was being unresponsive since the proceedings begined in 2015, in which he refused to take a court-ordered DNA test. These actions wouldn’t be in the best of interest of him, while waiting for his reinstatement back into the league. His legal issues and violations easily costed him the opportunity to have been considerably one of the leagues highest paid receivers, and blew it after another bad choice of decision making. But, in my opinion, no one is higher than the mighty one himself, and with Gordon just being 25 years old, he has enough time to correct his life.

Admist all of Gordon’s issues throughout his young NFL career, let me enlighten all you Ram fans the changes and progresses Gordon has built. Gordon is a 6’3″ 225 pound receiver, with 4.4 seconds speed in the 40 yard dash. Gordon speed is very deceptive on the account of his long and smooth track stride when he running. He’s very powerful and strong, with the ability to break tackles even out of linebackers attempts, has massive strength in his straight arm as shown in photo above, that he dished to Akib Talib scoring a touchdown. His 10 inch hands and 38 inch vertical gives him the ability to pluck almost every ball thrown to him out the air.

Why is Gordon a great fit and choice for the Los Angeles Rams? Immediately, he becomes the most prolific receiver the Rams have had since the playing days Torry Holt. His size and speed alone, opposes a threat to most defenses throughout the league, his route running capability is creative, especially when you watch his double moved routes that creates tremendous separation from his defender. His explosive leaping abilty, makes him a huge red zone target, and does not turnover the ball. Jared Goff gains a special weapon alone with the offense that employs a great running back  for Jared Goff and Tavon Austin. If the Rams were to retain Kenny Britt, this team becomes very dangerous on the outside.

But, this is what is most important to the the Ram fans; once Gordon is reinstated the Browns already has stated that Gordon’s reunion is impossible. Gordon tends to have a small percentage of teams interested in him for a roster spot. However, the Rams will have yet gained another steal, being that Gordon’s value would become cheap, signing him to one of those one year prove it type deals. Gordon is very anxious to get back into the league and looking to prove to everyone that he has put his demons behind him. He is focused and ready to make that transition in his life to prove to his doubters that he’s revamped his life. He’s only 25 years old and a player with the physique of a 20 year old man. When a team has lacked talent in the receiving department, its a no brainer to grab a player such as Gordon, no matter what past they have lived. With a new coaching staff , great mentors in his corner, and positive players at his side, is  just the attention he will need to remain on the up-and-up.

I say this, “the mind is a terrible thing to waste!” If the Rams doesn’t seize the opportunity to acquire Gordon, it would be a big mistake for them especially if he landed in the NFC West where the Seahawks or 49ers are looking to bolster their receiving core.

On April 24, 2017, Josh Gordon will appear before the league in effort of being reinstated back into the NFL. He is now being represented by former Olympic Gold Medalist and world record holder Michael Johnson, who also attended Baylor University.

Johnson gave a statement to ESPN in regards to Gordon, “Josh is living with me and is in the best place mentally that he has been in dating back years before entering the NFL. He taken the proper steps to treat his issues and has followed a very strict protocol that the league and our team here has laid out for him.”

“He’s also in the best shape of his life and feels even better than he did when he had his breakout year in 2013. This will be a special year for Josh and we are all very proud of the way he has taken the necessary steps to turn his life around.”