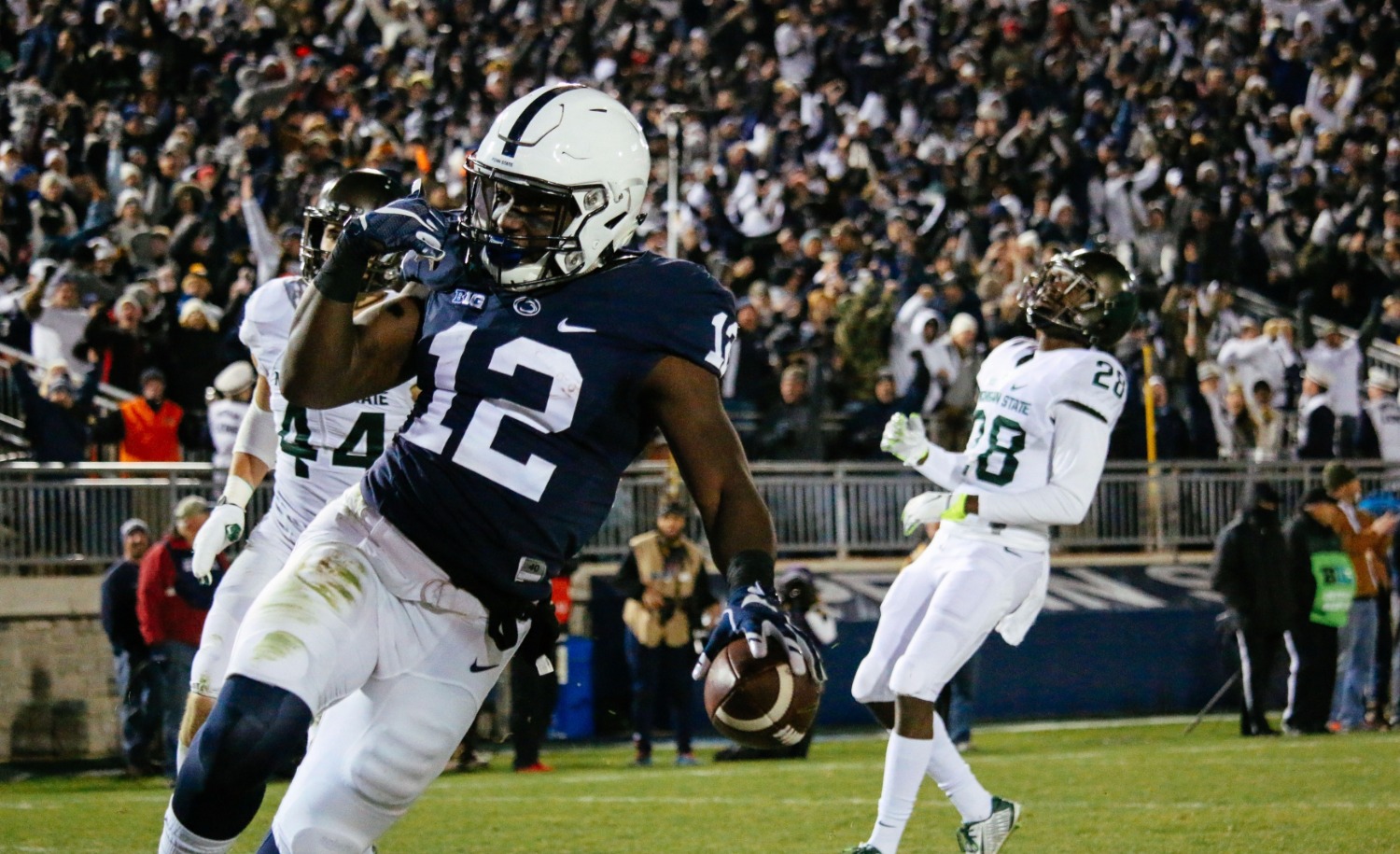 In this new series we are going to start breaking down our favorite players using media, our own knowledge of the game of football and what to look for in a prospect. This fourth edition of our Downtown Rams Scouting Report we bring you in this writer’s opinion, the safest wide receiver in the draft. Chris Godwin shows you exactly what a safe number one receiver prospect should look like. We will now take an in-depth look at his game both from the positive and negative side.

Chris Godwin is one of the best wide receiver prospects in this year’s NFL draft. He started every game of his college career, all 39 of them and was one of the biggest threats in the Big 10. Godwin finished his college career with 154 receptions, 2,421 yards receiving and 18 touchdowns for the Penn State Nittany Lions. Godwin, fresh off his best career performance in the Rose Bowl decided to declare for the NFL draft. What Godwin brings to the table for NFL teams is the fact he can step in right away and play day one. Godwin has all the tools to be a a number one receiver in the NFL. He may not be the big 6-foot-4 Mike Williams or 6-foot-3 Corey Davis of the draft but he checked all the boxes after his combine performance for me, as well as many other draft fans in showing he can be a starting NFL receiver.

In this clip we see a one on one match up Godwin has completely taken over by the time the two get to the end zone. Godwin uses his size advantage to gain leverage and make the big play for a touchdown. QB Trace McSorley lofted it up in what would have been a 50-50 ball situation if Godwin hadn’t turned it into a 90-10 ball by the time the two players were in the end zone. This right off the bat shows Godwin’s ability to win the end zone fade but on top of that it shows his ability to high point the football. Godwin is going to be used a ton in this situation at the next level and he is going to win the majority of the time.

Godwin is one on one with defensive back Iman Marshall. Marshall actually makes a good play due to McSorley under-throwing the pass but Godwin sticks with it. Just watch how Godwin naturally follows the ball bobbling off his hands with his eyes. While he is doing that he has to do a 180 degree spin which makes it incredibly difficult to concentrate on the ball. Godwin makes the play and shifts the momentum of the entire Rose Bowl game on this play alone. Big time catch by a big time player.

This is one of those miraculous plays that just commonly show up for Godwin on tape. This is the same game, Godwin and the Nittany Lions need a first down so he makes sure he makes his cut on the route past the sticks. In doing this, Godwin has established forward progress for the first down conversion as long as he catches it. McSorley throws an errant pass away from the receiver that Godwin stabs at with one hand and has the strength to bring it into his body and secure the catch. The huge catch allows them to extend the drive and score right before halftime. It also saved what would have been a guaranteed interception into the arms of Adoree’ Jackson.

Able to make the contested catch and fight for every yard

Godwin in this clip just looks like a freak of a man. He goes up and snatches the ball out of the air while pretty much being wrapped up and tackled. Instead he slips out of safety Leon McQuay III’s clutches and continues to try to push forward and gain an extra five yards. This is a player that plays a lot like Pierre Garcon now of the San Francisco 49ers, every yard truly matters to him and that is something that is useful in the NFL. Maybe the yards don’t mean much to a team here but you can be sure Godwin’s ability to fight for every yard will come useful someday.

Break-away speed to stretch the field

Now, many have flagged Godwin for his lack of straight line speed but he should have silenced the crowd after running a 4.42 at the combine. Godwin is fast, he may not look as fast as say John Ross, but this is still a fast player. In this play you see his ability to break through and blow by the defense. Another box that can be checked off for Godwin as he is seen blowing by as many as three different defensive backs and taking it all the way to the house for six.

Ability to run quality routes and sell them as well

This right here you don’t see everyday in college. Godwin completely schools his man by using a double move 10 yards downfield. So why does the defender bite so easily? Because Godwin sells the route to perfection. From the moment the ball is snapped he sprints down field versus a safety playing far off him. Godwin uses the sprint out of the gate to sell the route as a streak pattern down the sideline. Well, it is that route but what the defender isn’t ready for is Godwin to turn his body slow down 10 yards down field give a little head fake and then accelerate right back up field. The defender bites because every inch of this play is done perfectly by Godwin. Double moves work in the NFL and the fact Godwin has been doing it perfectly in college shows he’s ready for some real big boy coverage at the next level.

Shows will and heart to block for teammates and he’s able to hold his outside edge.

One thing that can’t be stressed enough about Godwin is how unselfish he is. This is a fourth and one play that is anchored by Godwin. Stud RB Saquan Barkley runs right after making a fantastic cut to the avoid the traffic inside. He gets to the outside and Godwin is there holding his block and securing the first down and much more. Godwin uses great technique staying square to his target and blocking him completely out of the play. If Godwin is unable to first off, establish position, secondly have the sense of urgency off the line of scrimmage and lastly show the ability to drive back the defender and stay strong while engaged . . . then this play turns into a turnover on downs. Huge play here by Godwin and this is just something to add to his value chart heading into the draft.

I am not going to lie I could watch this clip all day. It’s quite simply one of the best plays in his arsenal. Godwin makes a big time block on 2nd and 8 late in the game down three. The block springs Barkley to find enough of a crease to . . . do his thing (he is so going in the first round next year). What’s funny about Godwin is I see a ton of Garcon in him but he looks like Steelers legend receiver Hines Ward   on this play. Godwin shows off serious tenacity and situational awareness in practically spearing and blocking his assignment completely out of this play. The Rams in my personal opinion lacked this and have been lacking it. I think Godwin checks off many boxes and provides a ton of value for McVay’s team to think about. This is one of those clips McVay and company will love seeing.

Maybe it’s just me but I do feel like Godwin can sell himself short at times. He is a phenomenal football player and I only believe he is going to keep growing until he is a pro bowl caliber WR. However, there are times where he seems as though he isn’t playing to the speed he should be playing. It’s not a motivational thing because he still comes back in the play and will show that he has a serious love and passion for the game. I just feel as though maybe he is too inconsistent with his explosiveness and maybe he does have explosiveness, but struggles at consistently showing it.

Godwin is one of the best receivers in this class but he does lack something that likely pushes him out of being a first rounder. Godwin doesn’t really use his hands much against a press/man defender. He is going to need to at the next level because he can’t just rely on his speed when he is going against cornerbacks like Patrick Peterson who will be much faster. Godwin is a good athlete but that doesn’t mean immediate success. Now, he is very well technically sound, but he needs to be more physical at the line of scrimmage or he could have a tougher time than other rookies at the next level.

This is my number one target at No.37 overall for the Rams. Chris Godwin has so many strengths as we just covered and his film is full of him having to step up and put his team on his back. I think ultimately this guy resembles another perfect fit like we previously mentioned with Kittle, for the Rams new offense. Godwin, will start on the outside if drafted next to former-Bills wide receiver Robert Woods. Right off the bat you are getting two good route runners and run blockers which is going to be key in Sean McVay’s offense. Just imagine Godwin, Woods and Austin on the field as weapons for Jared Goff. That would be a solid group and there is no way the Rams with the amount of capital they put into the offense this off-season would finish last in the league in offense again.

Now, moving away from the Rams for a second, Chris Godwin reminds me of two players in particular. I have said he reminds me a lot of now San Francisco 49er Pierre Garcon and after further film review I believe and said earlier that he is very similar to Pittsburgh Steeler great Hines Ward. Godwin and Garcon as far as pass catching, route running and run-after-the-catch ability are very similar. So why do I think of Ward when I watch Godwin? He has that same tenacity that Ward played with in the steel city. Go watch Hines Ward highlights if you need your memory refreshed, he laid the wood as a receiver. Those big time impact blocks can be seen out of Godwin as well but the great thing about Godwin and Ward is, anyone can “block” but both show their disciplined ability to be impact blocking receivers. If Godwin ends up anyhere near the level of player Ward and Garcon ended up being, consider this a great value pick in the second round.

For every Isaac Bruce there is a Brian Quick, we all know that now unfortunately. I can say with confidence that I do not see Godwin being a Brian Quick. Godwin is not a finished product by any means but he can contribute right away and most importantly give the Rams another starting receiver that should make Goff much more comfortable throwing to moving forward.

What are your thoughts Rams fans? Do you like Godwin? Let us know and stay tuned for the next edition of our Downtown Rams Scouting Report series.