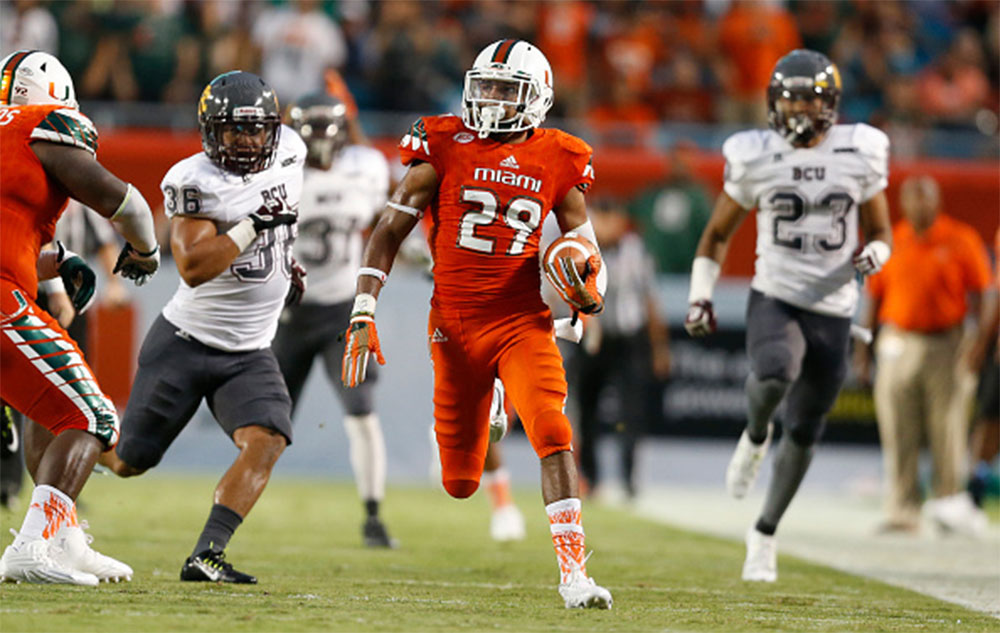 Meet my favorite DB in this entire draft class, Corn Elder from the University of Miami is a joy to watch. He did it all for the canes – Special teams, return man, nickel/outside corner, blitzer and run support extraordinaire. Corn Elder aside from having a great name, represented himself well at Miami’s pro day. Measuring in at 5’10 185 pounds, running a 4.42, and jumping 35 inches.

Corn finished his 2016 campaign with 76 tackles, 3 sacks, 1 int and 12 pass breakups. Very impressive numbers that demonstrate his tenacity as a tackler and ability as a zone corner. My favorite part of his game is the nature in which he plays the position. Elder attacks, he processes information very quickly and reacts without hesitation. He supports the run with more passion than any corner in this entire draft class that I have watched so far. The gif below demonstrates his tenacity when attacking the ball carrier.

He reads it is a run and immediately sprints towards the line of scrimmage to make a stop on Dalvin Cook (the consensus No.2 running back in this years draft) for about a 1 yard gain. This is the kind of attitude you love to see a corner play with. No hesitation to stick his face in the run game and quick to realize that he needs to abandon his zone responsibilities.

The next gif is my favorite clip of him I found through the 3 games of his I watched. The play is designed for him to drop into a zone flat route, Corn realizes that as the play develops his zone remains uninhabited. He then notices an out route developing about 7-8 yards behind him so he breaks off his zone flips back and makes a diving attempt to break up a pass.

This plays shows the athletic ability and football IQ that has me drooling over a guy like Corn Elder. I promise you folks you do not see plays made like this every day this is NFL type play recognition and recovery speed.

Lastly I would like to show a play where Corn again demonstrates how quick he is to diagnose plays and without hesitation click and close on a ball carrier.

From the get go in the above play Corn realizes this is a designed bubble screen to his side of the field. Before the WR he is responsible for covering even realizes the play has started, Corn Elder flies into the backfield to make a tackle for loss against one of the shiftier players in this years draft Ryan Switzer.

To summarize Corn Elder is a great player, he’s smart, quick, decisive and can tackle. My only hesitation’s with him are the fact that it was nearly impossible to find any tape on him playing man coverage so it is up in the air as to how he will perform in a man scheme and also he never showed to be much of a ball hawk in his career. Though if I had to guess I would say his skillset could definitely allow him to play well in a man scheme if he worked on his footwork and punch off the line of scrimmage. Overall I expect Corn Elder to be a round 3 pick and be one of the top 3 zone corners to come out of this draft. I like him that much.