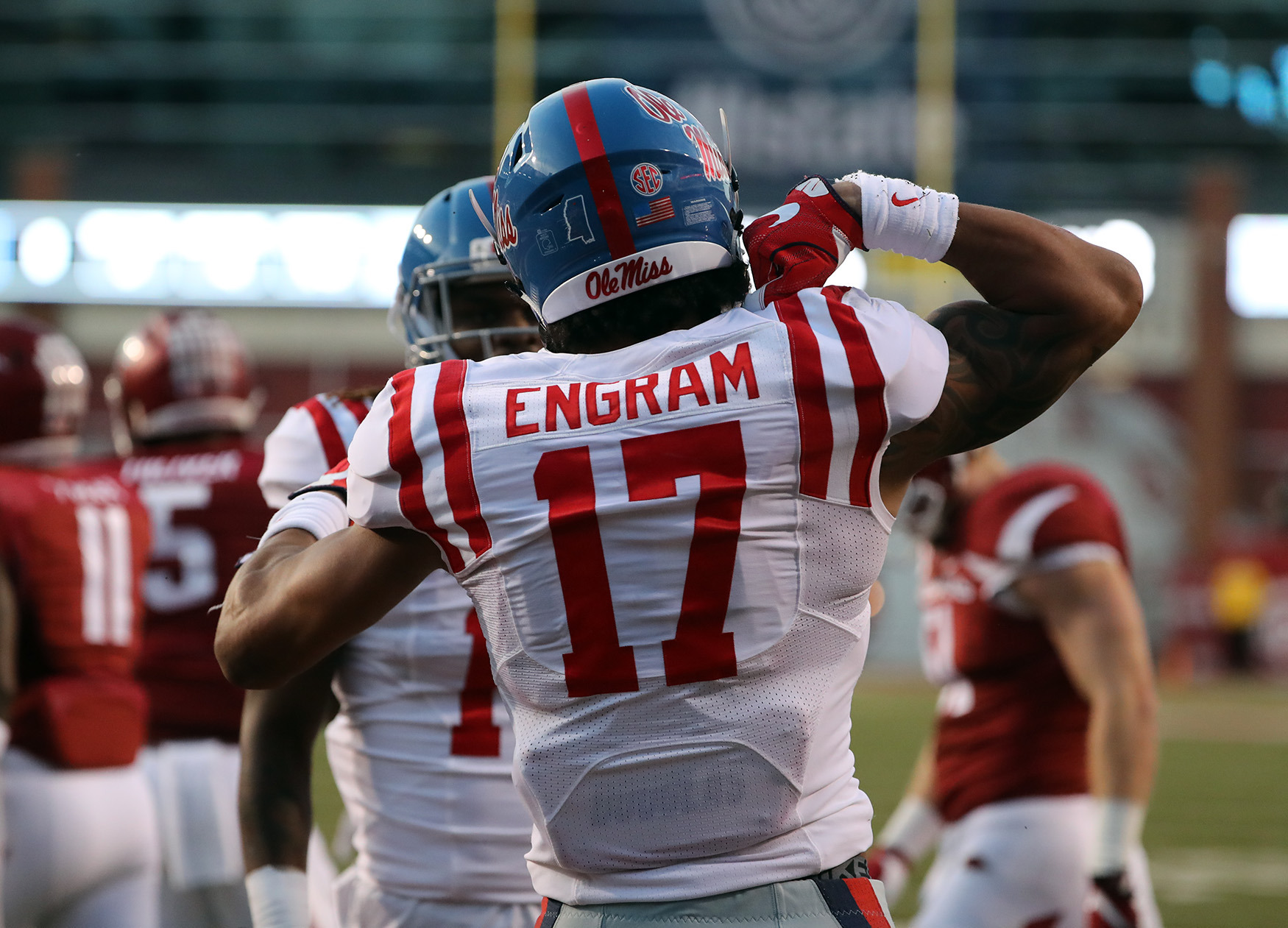 Today I bring you Evan Engram, number 17, TE for Ole Miss. This is a guy I am very excited to write about, at 6-3 234 pounds Evan Engram may just be the most athletic TE to ever come out of college and I am not exaggerating folks. He ran a 4.42 (would’ve been a top 10 number for all WR’s at the combine by the way) jumped 36 inches in the vertical and put up 19 reps on the bench. If you’re looking for tools Engrams got them all.

After watching 3 of his games in 2016 against the top schools he went up against I came away very impressed. He is exactly what I expected him to be when I first started looking into him. Lets start with him as a receiver.  Below I have a clip of him doing something I expect him to do consistently  in the NFL.

In the clip above Engram starts from the slot and runs a seam buster. He splits the linebacker and safety in their zones with his speed for an easy TD from Chad Kelly. These are the kinds of plays that the Gronkowski, Graham, and Antonio Gates of the world make every day in the NFL. It takes a freakishly athletic TE to execute it and Engram does it with ease.

Engram doesn’t just beat safetys and linebackers though, hes got the speed to burn corners deep as well.

In this clip we see engram in a 3 receiver set getting matched up with a corner, who happened to give him about a 15 yard cushion. Engram starts the route and in about 2 seconds flat eats the cushion up and starts to fly past the corner. If not for an under thrown pass from Kelly Engram catches this behind the corner and runs it in for an easy TD, regardless Engram still makes a great play on the ball for a deep contested catch.

I could show you clips like the above two of Engram all day flying by defenders for deep receptions and TD’s  but I will move on to address a major concern for many with Engram, that being his blocking.

Let’s start out with a very unflattering first clip of his first block attempt in a game against Auburn. (unfortunately I only had to dive 3 seconds into this game to see him completely whiff on a block)

As seen Engram fails to line up with his defender and punch his hands accurately into the defenders chest in order to execute a good block. In failing to target the chest he whiffs and the defender fly’s by him to assist with making a stop. In the tape I watched I did see Engram more than you would like to see, missing on these types of blocks. Though to be clear, I feel VERY strongly that most of his blocking woes stem from a sever lack of technique. Too often he would initiate the block with his down making it impossible for him to accurately punch into his assignments chest. However when he did make contact and played with a solid base and good technique Engram was more than serviceable and I would even go as far as saying good as a blocker. The clip below he blocks a defensive end pushes him back a few yards and successfully creates a nice hole for the RB to run through.

All in all Evan Engram is a great TE prospect and leading the charge for the new age TE’s being used in todays NFL. He can line up at any receiver spot, run a route out of the backfield, or from the traditional in line TE spot and be a mismatch with any and anyone who tries to cover him. Too fast for any linebacker and too big for any DB to cover Engram will be a nightmare. With some work I believe he can turn into a good blocker too. The power is there he just needs technique help, but lets be honest if you draft him it is to be a super star move tight end.

To conclude my report on Engram I would like to state that I would not be surprised if he is the first TE off the board. In my eyes Engram is the BEST tight end in this draft class, and yes I do remember that both OJ Howard and Njoku are also in this years class. Engram is phenomenal as a receiver in every way and will electrify the NFL once he steps on the field and with some work he will be a good blocker too. I can see him going any where from first TE off the board to falling to the early 2nd round it really just depends on what you value as a team, but for me, he is the best TE and will be the best TE in 5 years from this class. I would put money on that.