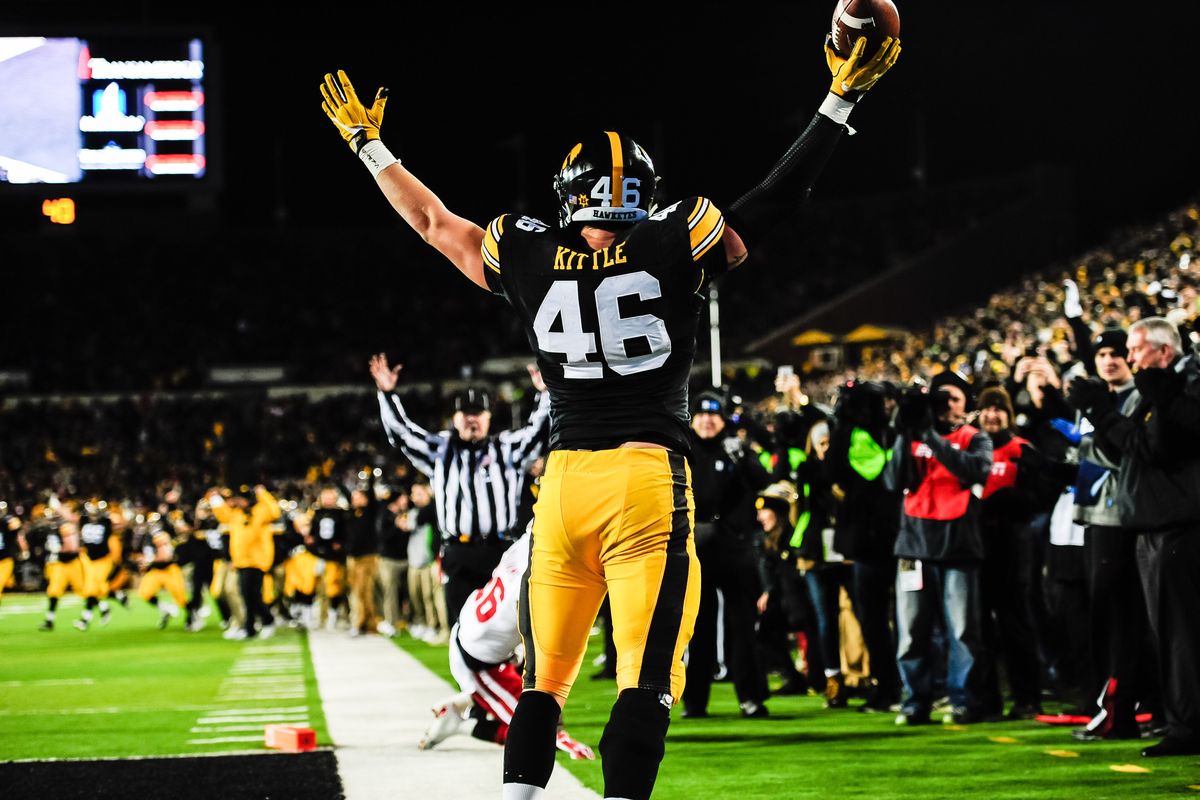 In this new series we are going to start breaking down our favorite players using media, our own knowledge of the game of football and what to look for in a prospect. This first edition of our Downtown Rams Scouting Report we bring you a guy that should see his stock start to shoot up. George Kittle shows off what it means to be an Iowa Hawkeye but adds his own spin on it. We will now take an in depth look at his game both from the positive and negative side.

George Kittle is one of the biggest sleeper TE prospects due to the fact he made a reputation for himself as just a blocking tight end. During his time at Iowa he played 25 games, he finished with 48 receptions for 737 yards and 10 touchdowns. Unfortunately, Kittle was not utilized in such as way that would showcase his full potential and because of that it’s probably why he isn’t a guaranteed second round pick right now. Kittle has ideal size at 6-foot-4 and 247 pounds. He’s not the big and giant TE that teams may want but he gets away with it with his premier athleticism and blocking technique. He played all three phases of a tight end’s possible game – inline, H-back and outside at WR. Kittle has the bloodline from his father Bruce Kittle playing for Iowa’s 1982 team which played in the Rose Bowl. One thing coaches are going to love with Kittle is the fact he works as hard as anyone in a game or on the practice field it doesn’t really matter because Kittle is going to play every down like it’s his last.

What you have here is a player that is supposed to take on this defense end and block him in one place so the pulling guard can get around to the left side and forcefully attack his man opening up a running lane for the running back. Instead, Kittle doesn’t want to just stop there he shows his explosion off of the line of scrimmage by blasting his man back almost ten yards. That’s a defensive end folks that he just rag-dolled in this first clip. Pure explosion and that is one of the key elements that make Kittle so dangerous. This is the stuff that will jump out at you on tape.

Ability to accelerate on a dime

Here in this play QB C.J. Beathard runs play action, Kittle is on the left side acting as a blocker but instead it’s more of a chip block that he hits his defender with at the line of scrimmage. While that is real impressive what is even more impressive is how quickly Kittle is able to stop and go on this play. Unfortunately, it becomes all for nothing because Beathard overthrows Kittle by a half a step. Again though, this right here shows another reason why Kittle can be dangerous. Being able to use Kittle off the line with Higbee could be a nightmare scenario for the NFC West.

This is a simple FB wheel route that is executed to perfection after Beathard uses the play action once with the running back and then another time with the receiver faking the end around. Kittle gets behind enemy lines by following his assignment and executing a perfect play. Beathard puts the ball right on the money for Kittle who gives Iowa a huge play in a tight game versus North Dakota State. Kittle shows off his ability to be a serious threat for the defense if they don’t account for him. Adding a player like Kittle to the Rams would ensure that double teams would be non-existent. Having an I formation with Gurley and Kittle is going to be hard to stop if the Rams select Kittle.

Right here is a gem of a play that will go right on any highlight tape for Kittle. He powers through Pittsburgh Steelers safety Sean Davis who tries to jam him at the line, then he accelerates up the center of the field splitting the secondary. Beathard throws another inaccurate pass but Kittle bails him out with a spectacular one-handed grab. This is just a sample of what Kittle can do at the next level. He was very aggressive in this play and because he never slowed down or hesitated he was able to stay with it and make a tough catch down the seam.

Menacing blocker with a tank that never runs out of gas

This video went pretty viral like the Aaron Donald vs Cyril Richardson senior bowl one (I don’t think I have to tell you who won that one). Anyway, Kittle shows off his explosion again but this time he launches this defensive end almost out of bounds. Kittle shows great technique as he puts his head right into the defenders pads and drives him him back with serious authority. This right here is going to give Kittle the blocker reputation I previously mentioned. This won’t go away when he enters the NFL. Yes, maybe that DE isn’t exactly like having a Jason Pierre-Paul like end coming at Kittle but still Kittle eats his lunch in this clip and it’s just brutal. A clear non-stop motor. 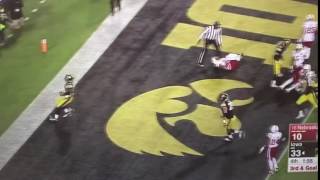 It’s an inside zone run here in which Nebraska does a nice job of penetrating the backfield. If George Kittle doesn’t step up in the red zone and drive his man out of the way the play likely backfires. Kittle of course rises to the occasion and does just that by driving his man completely out of the way for LeShun Daniels to scamper in the end zone. Last year Kittle could have helped clear a path for Todd Gurley. On this play you see Kittle use all of his leverage and take over the play. The Rams will have a red zone threat in Kittle if selected due to his ability to make plays as a receiver but also act as a human battering ram for the ball carrier.

The weaknesses are minimal and mainly they are things that couldn’t really be controlled by Kittle himself. First of all Kittle didn’t really get a ton of chances to play. When he came in to catch passes he was effective, but it wasn’t extremely often. Due to the lack of usage and under-utilizing Kittle he comes to the NFL with some question marks.

He wasn’t used in different type of routes like the majority of the tight ends in this class. Basically Kittle ran wheel routes, stop-and-go routes, in and out routes, seam routes and screens. He really wasn’t used in anything too complex and thus when he gets to the NFL you will notice a player that will need to refine his cutting ability. He rounds off his routes at times and if he’s going to be your starting TE that needs to be fixed.

Kittle battled injuries in 2016 and 2015 which caused him to miss seven games over those two seasons alone. We have seen injuries derail rookies like Tyler Higbee last year. Kittle can’t afford to battle injuries in the NFL. He will make his money as an every down inline TE or even as a fullback.

This is a weakness whether it was Kittle’s fault or not the fact is that despite how great he looked at the combine it doesn’t change the fact Iowa didn’t use him a lot in the passing game like some of the other tight ends in this class. That could hurt him or it might not. I think all this really does is make it so Kittle has to play as the second tight end as supposed to carrying the load by himself.

This is one of my favorite players I have watched film on this draft season period. I keep saying it and I’m not going to stop saying it. Kittle embodies everything new Rams HC Sean McVay wants in a football player. This is a player that is going to step on the practice field right away and earn his role. He plays like every down is his last. Players take plays off? Kittle wouldn’t even be able to comprehend the idea of taking a play off. Kittle just is a different breed of football player. He is the ultimate team player and you see that with the way he blocks. Totally selfless and on top of it he’s pretty darn talented as well. This is a player you see come around and you think blocker. Kittle is going to stun defenses when his offensive coordinator learns how to play him to his strengths.

I think Kittle is either going late third or early fourth round. I think that McVay will ultimately find Kittle too valuable to pass up on as he is the culture change McVay wants to make. McVay has been a TE’s coach and he’s also been an offensive coordinator so he will know how to get him involved. The Rams released Lance Kendricks so it’s just Tyler Higbee, Temarrick Hemingway and Cory Harkey left on the roster. McVay leans heavily on a play action heavy scheme with multiple tight ends and so he will likely need to add one more to the fray and that will be and rightfully should be Kittle. There is already one Hawkeye on the Rams by the name of Andrew Donnal so I am sure he could attest to Kittle’s hard working demeanor.

Overall, I found Kittle was actually the hardest to find a player comparison for out of anyone I scouted. I think ultimately he’s a mixture of former Indianapolis Colt legend Dallas Clark, Buffalo Bill Charles Clay and former Redskin Chris Cooley. Kittle is a similar receiver to Clark but he runs like Clay and blocks like Cooley. I think Kittle is a new breed, I don’t think I have ever seen this type of athlete able to stretch the field and block the way he does.

What are your thoughts on Kittle Rams fans? Let us know and stay tuned because we have two big time SEC players on tap for you in our next Downtown Rams Scouting Reports.