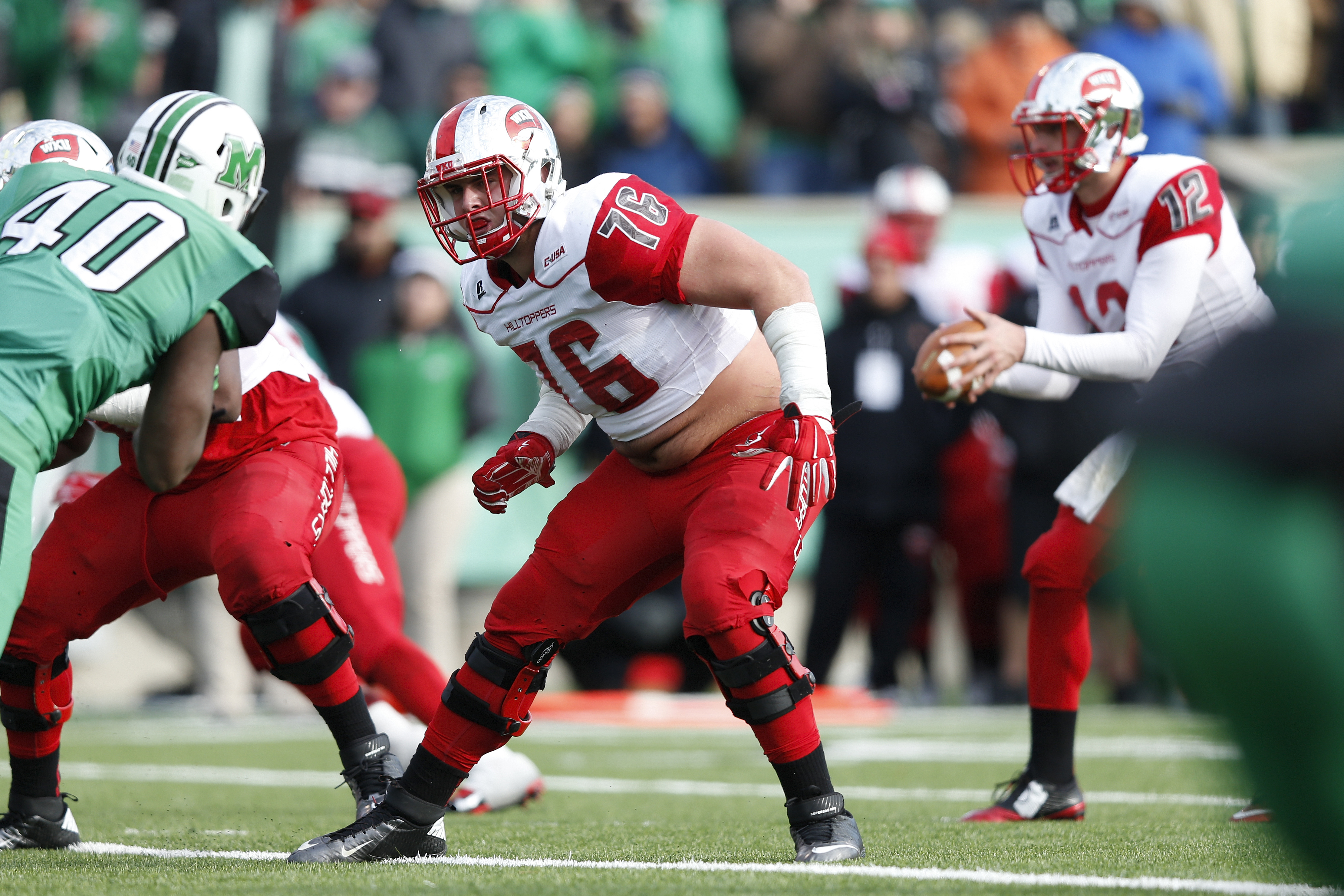 One of our early pre-draft crushes we wrote about (here) Forrest Lamp has gained a ton of traction as a potential first round pick. It also appears that the Rams really seem to be interested in Lamp.

The Rams met with Lamp back during the Senior Bowl and he apparently started to shoot up draft boards during that time. The Rams put a lot of stock in the Senior Bowl . . . mainly general manager Les Snead so this could mean something. On top of the Senior Bowl though, the Rams privately worked out the Western Kentucky offensive lineman. They join a list of two other teams: Los Angeles Chargers and Atlanta Falcons who have also met with Lamp multiple times.

Lamp, I compared to Pro Bowl guard Zack Martin. Martin is a player that played tackle and because of his shorter arms he was forced to slide inside at guard. Many believe that is Lamp’s fate, but quite honestly if the Rams are this interested it makes me think he could play inside to start and maybe play outside as insurance for Greg Robinson or Andrew Whitworth. One thing you notice after consistently watching and researching prospects is that draft experts love to throw OT’s at guard. Lamp I think is another sign of that “clumping” we often see come draft time. When watching him against Alabama’s top edge rushers in Tim Williams and Ryan Anderson he really holds his own. Lamp was one of the top offensive tackles in all of football at the college level so in this writers opinion it’s a little lazy to just say he’s only going to be a guard.

At the combine Lamp showed off some serious athleticism that would make me believe he could be dominant in getting to the second level and acting as a convoy for Todd Gurley. Here are his numbers according to the NFL combine:

The same experts that throw him at guard say that he doesn’t have the NFL strength which the 34 reps shows is completely untrue. Lamp is just a well-rounded prospect that can play tackle. He may need to start off at guard but this was a kid that started four straight years protecting the blind spot and did a real nice job.

Here he is getting some serious love from Pro Football Focus.

Forget about the Alabama game, check out this game in which he puts a guy with more talent than the two Alabama edge rushers combined in his place. Lamp honestly looks like a mystery box in this draft. By that I mean he can realistically play every position on the line.

Listen to the above clip. Not only are the Rams listed as a landing spot for Lamp, but Daniel Jeremiah of NFL Network believes Lamp can be a center at the next level and so if he moves all way inside to center he would be filling a need and would likely make the Rams an exciting and highly intriguing offensive line. Steve Smith even said during the combine that Lamp can be your franchise. Lamp is one of the most unique cases for this year’s NFL draft. The crazy thing to keep in mind about Lamp is that if teams view him as that guy that can play every position it may devalue players like Ethan Pocic from LSU, Pat Elflein from Ohio State and Tyler Orlosky from West Virginia and force centers further down the board which ultimately if the Rams miss out on the Lamp sweepstakes there will be higher value guys for the taking later in the draft.

How special is Lamp? Could he fall to the Rams in the second round? Is he as good as gone? We ask you Rams fans! You tell us your thoughts on Forrest Lamp. Is it worth him starting at tackle first? Is it worth moving him to guard or center? We want to get your thoughts.