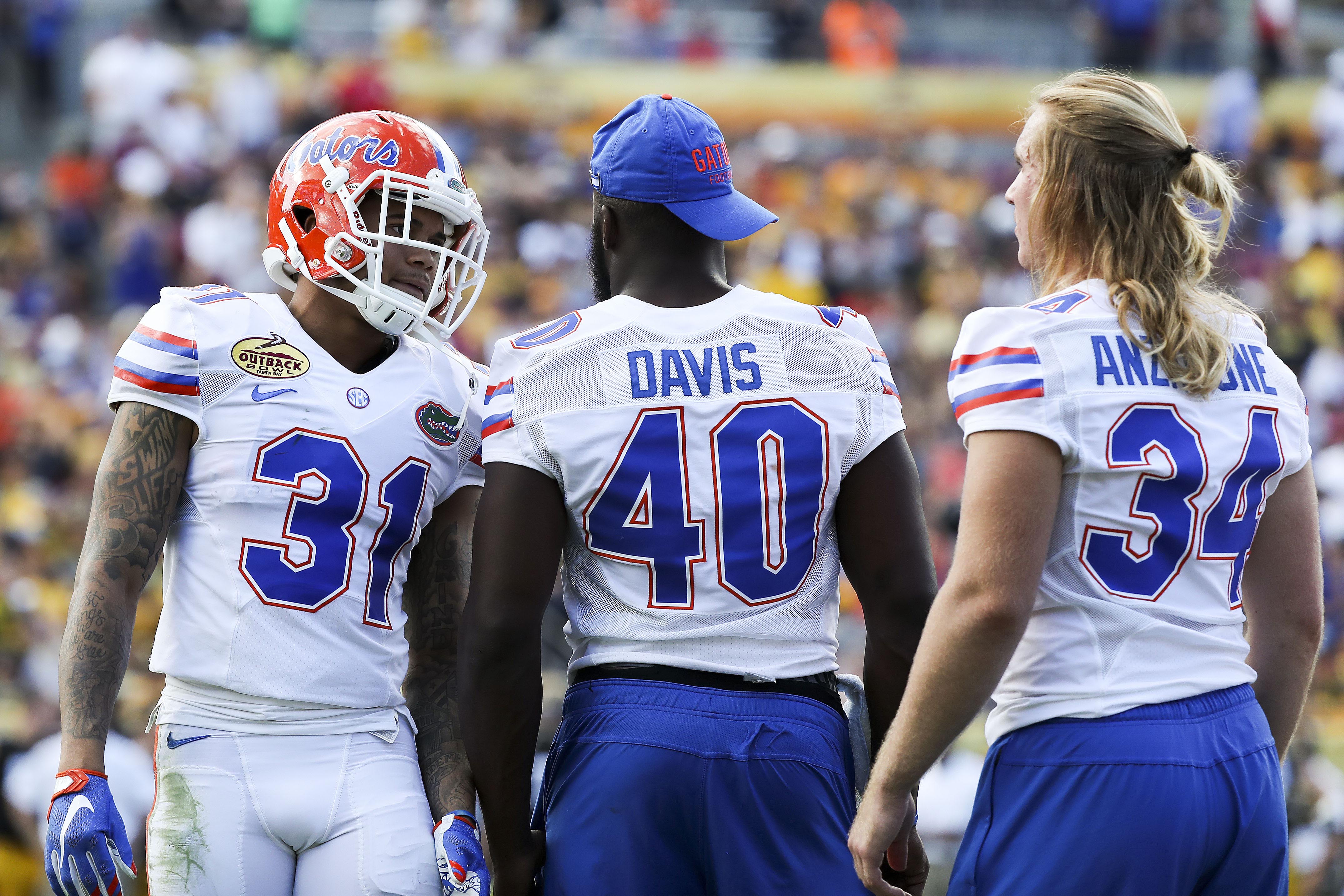 Major shakeups? New things are happening around the NFL, the Rams didn’t quite end up with a center like I thought when my mock draft 3.0 came out and a previous first round shutdown corner has since started to plummet down draft boards. Here is my new 4.0 edition of my Los Angeles Rams 2017 NFL Mock Draft. 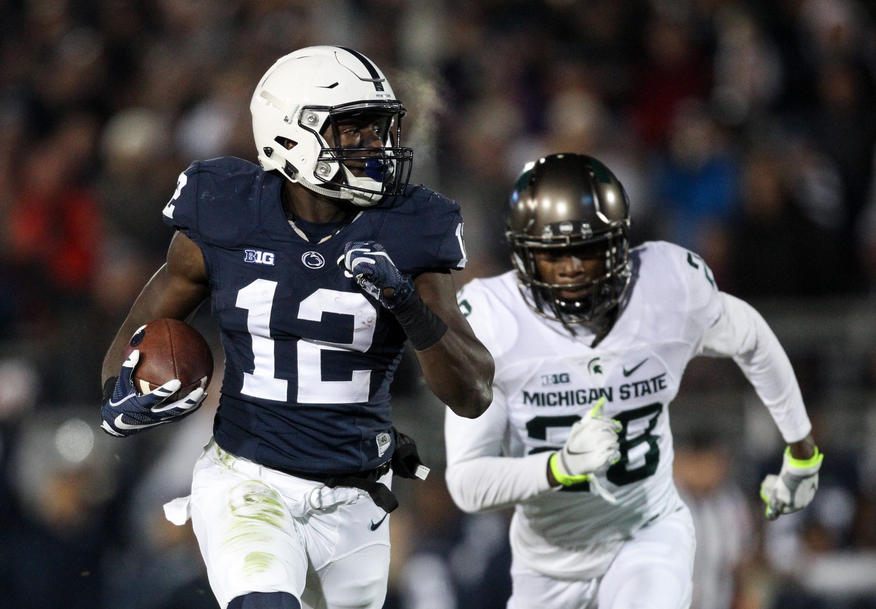 Sorry guys this pick isn’t changing, but I will point out that we have our first trade in this series. I decided Godwin can be had for a little later in the round so I swung a deal with the Washington Redskins to pick up another fourth rounder which will be valuable for building a great draft class.

The reason for Godwin if it wasn’t obvious before is the fact I believe he is the best natural hands catching receiver in the draft, he runs routes well, has ideal number one receiver size, has the 4.4 speed everyone begs for. Godwin to the Rams just makes the most sense. Obviously there are guys like CB Adoree’ Jackson USC, WR JuJu Smith-Schuster USC, TE Evan Engram Ole Miss and G Dan Feeney from Indiana that could all be in play here. I would think each and everyone of them are being mulled over by the Rams brass right now. 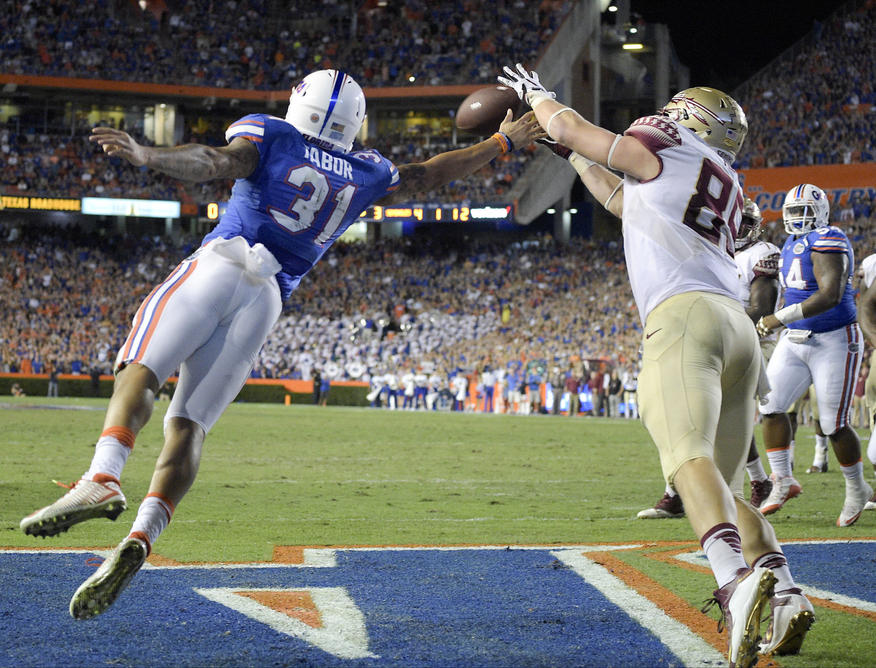 Here’s another shakeup of my mock courtesy of Chidobe Awuzie rising up draft boards and Jalen (I’m not calling him Teez) Tabor. Awuzie has been dominating the pre-draft process and has left experts stunned and starting to believe he could sneak into the first round. Tabor on the other hand is experiencing a collapse of his stock. He ran slow at the combine in the 4.6 range but his 4.7 forty yard dash at his pro day alarmed scouts leaving everyone to say he will be falling far.

Tabor was falling out of the first round before this so I feel he is now going to fall into the third round for the Rams to be given a chance to get a real good player. Tabor is a definite lock-down corner and has the charisma and leadership qualities you like out of your corner. Tabor would be able to play the nickel spot or compete versus newly signed CB Kayvon Webster for the starting role alongside Trumaine Johnson. We won’t even go into the idea of trading Johnson since it would be just brash speculation but Tabor and Webster would be your starting CB’s if that was the case. He’s in my top two at cornerback and the Rams would be getting a steal in the third. 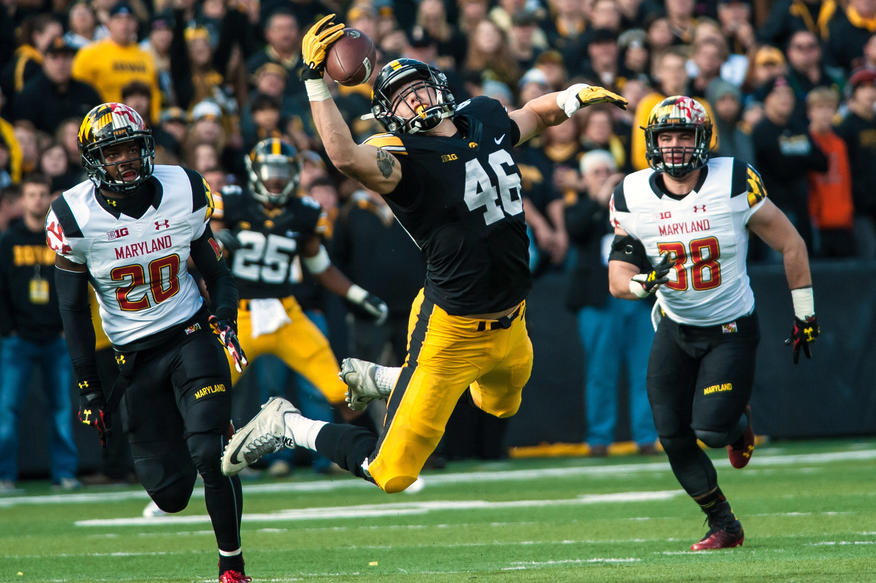 This is a statement pick for the Rams. This represents a staple of what Sean McVay wants to bring as far as culture. Kittle is a no-brainer for a team that values athleticism, hard working demeanor and toughness both physical and mental. Kittle embodies all of that and would make for a dominate duo combined with Tyler Higbee. Kittle may not be the sexy pick but jump on the bandwagon now because it’s going to take off.

Kittle is a nasty blocker and by that I mean he literally tries to slam players through the ground. Iowa players always seem to have an extra edge to them as blockers. He ran a 4.52 forty yard dash at the combine which is crazy to go with his blocking ability. Kittle could very well end up in horns because of how hard of a worker he is you can already picture McVay raving about this type of player. 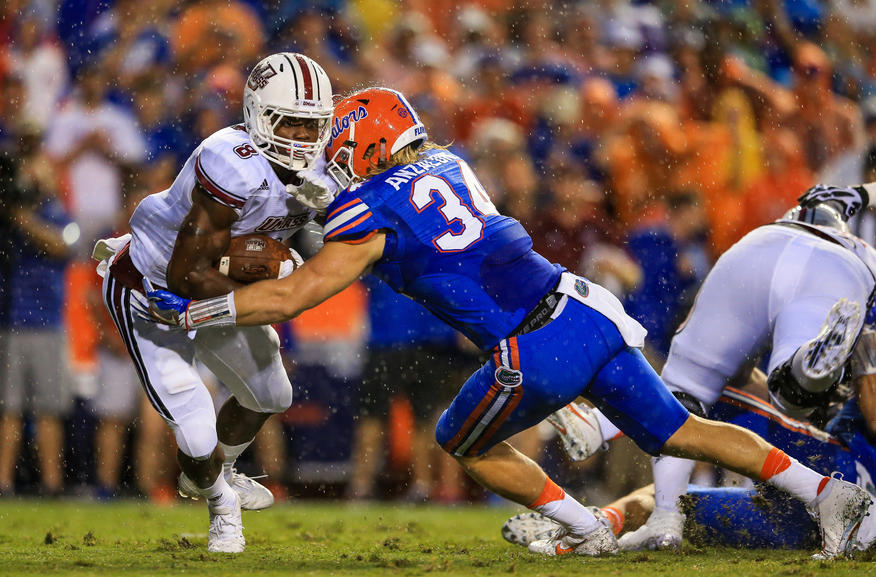 I was going back and forth with Anzalone and Kendall Beckwith here. I decided to go with the more athletic linebacker of the two. Anzalone has had some serious injuries in the past but I think his talent outweighs that. The Rams would have to consider trading Mark Barron if they drafted Anzalone because he would play right next to Alec Ogletree as an inside backer.

Anzalone has the speed to be a force as linebacker, he can be a monster run stopper and he shows off his exceptional burst and his ability to get skinny and break through the line on occasional blitzes. Anzalone is a day one starter as long as he stays healthy and will only turn into a better player having Wade Phillips as his defensive coordinator. 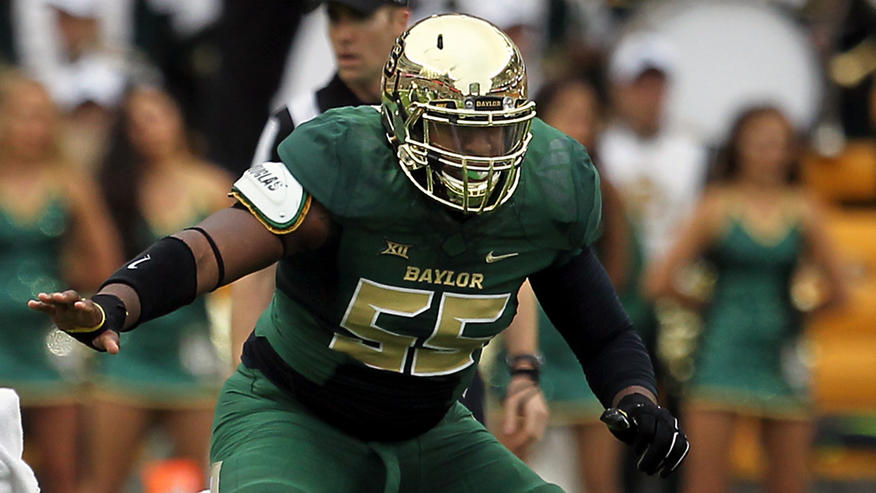 I have become a huge fan of Kyle Fuller’s game and the fact of the matter is this, he’s going to be the best available at this point in the draft. Don’t get tricked, Pat Elflein, Tyler Orlosky and Ethan Pocic will all be picked higher than mock drafts have them. Fuller is the last option as far as a center who in my opinion can start day one. Fuller has excellent size and his hand strength is impressive.

I still really like the idea of giving Demetrius Rhaney a chance to earn the starting job, drafting Fuller would push Rhaney and would make for a good training camp to see who the next Rams center would be. 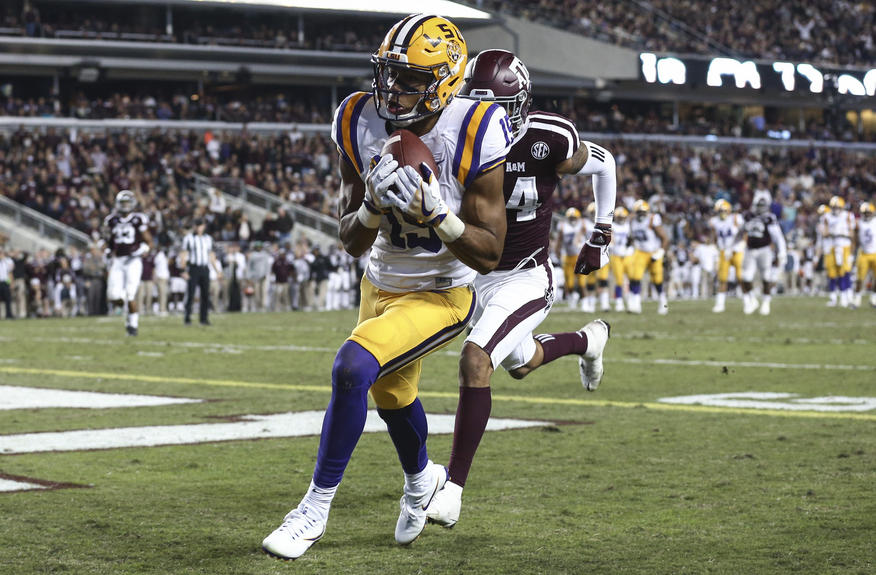 After a hiatus Malachi Dupre comes back into my mock draft only to fall a round than he was before. Dupre is being a little underrated as I previously mentioned because of the fact he had a lack of production. It’s not really fair to hold that against him when he played in a run heavy offense and with not one NFL type of QB.

The Rams need to add a big bodied wide receiver and while Dupre doesn’t have the weight, he has the size. As of right now Dupre would be the tallest WR on the Rams. He will come into the league a little raw due to the lack of use he received at LSU. He shows off excellent body control, ball tracking, jump ball effort and has a sneaky amount of speed. The Rams would definitely like to bring in a guy like this to develop in the new offense McVay is putting in place. 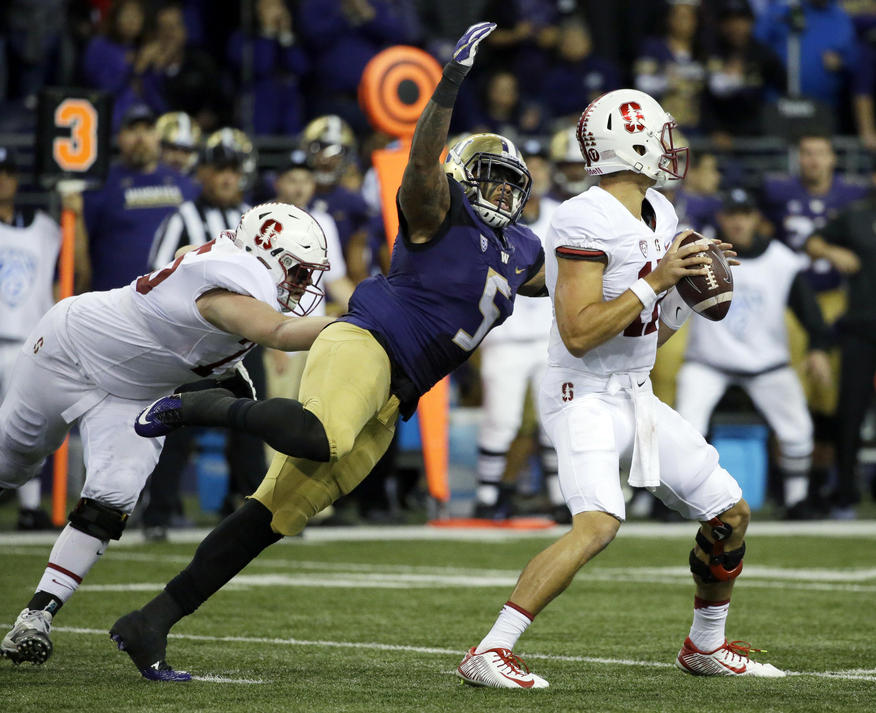 It’s pretty obvious by now I have a draft crush on JoJo Mathis from Washington. He is going to be a good pro at the next level and I love how many continue to knock him and red flag him on this and that. The fact is this, when he was healthy last season he changed the entire defensive game plan as opposed to when he wasn’t out there.

Mathis is going to be a very good pass rusher at the next level, he doesn’t have elite speed sure but he has a unique amount of power as he benched more than any LB at the combine. The Rams could use Mathis in a situational rusher role and then perhaps try him at OLB when Connor Barwin’s time with the Rams is up. 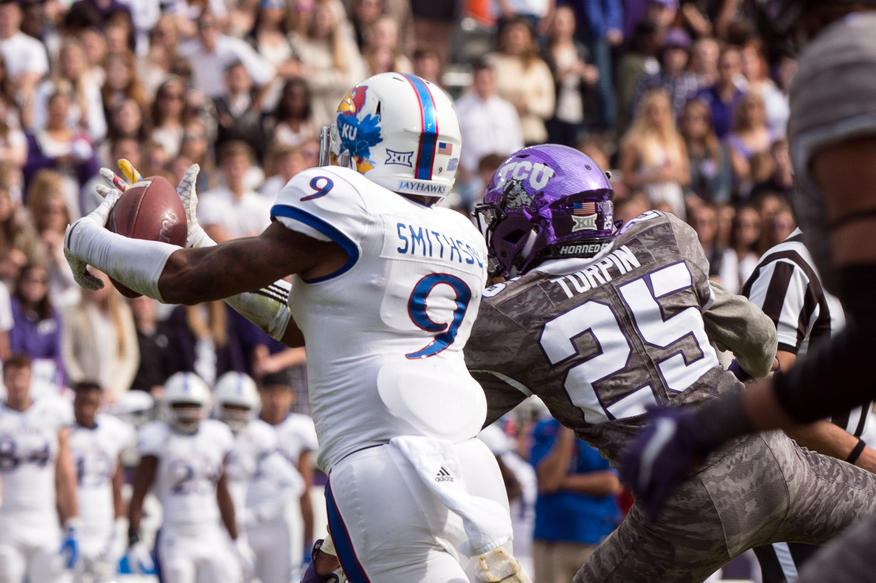 This is one of the biggest diamonds in the rough of the entire draft. I refuse to take him off my mock draft. Fish Smithson possesses the instincts, intelligence and leadership to have a definite role in the NFL. This is another high character guy for McVay and another Kansas player for Wade Phillips who has not only coached two pro bowl KU players but he even coached at Kansas years ago.

Going into 2017 the competition for the starting FS spot would be between Fish Smithson, Brian Randolph, Cody Davis, Marqui Christian and Isaiah Johnson. My money would be on Brian Randolph but regardless both Randolph and Smithson would have roles for the Rams. 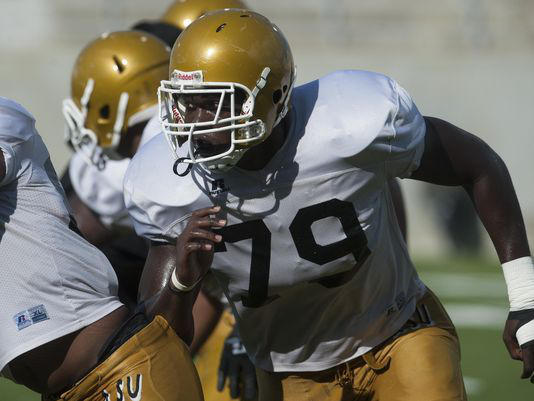 The Rams in my opinion don’t need a ton of offensive linemen like many are shouting for. All the Rams really need is a starting center and another tackle to develop. Enter Jylan Ware, who is a small-school athletic beast. He has great size, a great feel for the game of football, long arms and athleticism that puts him at the top of the class or near it in that regard. He has shown that he is quick enough on his feet that he will be able to handle edge rushers at the next level.

One issue with Ware is his weight. He will need to bulk up at least 10 pounds. The Rams can use him to stay behind Greg Robinson and Andrew Whitworth. New offensive line coach Aaron Kromer is a real teacher of the game and could get the most out of Ware. Some scouts believe he will some day end up starting in the NFL just off the ability he has to pick up things quicker than most of his peers. I flirted with the idea of drafting Julie’n Davenport in the fourth but I felt like Anzalone would be more valuable for the here and now as well as the future. Like Davenport, Ware is raw but Davenport is nowhere near the athlete Ware is and this would the Rams first project in the new regime.

– EDGE Tyus Bowser & TE Adam Shaheen are flying up draft boards and could be taken as high as the early portion of round two. Bowser of Houston has been the biggest name rising up boards and he could even go in the first round. Shaheen of Ashland has only seen an uptick of his stock since slaying the combine.

– WR Speedy Noil of Texas A&M is going to be a contributor at the next level. He had some trouble at A&M and wasn’t given the playing time or much of an opportunity to show what he can do. He is the former No.1 overall high school athlete and is ready to show off that athleticism at A&M’s pro day March 30th.

– CB Daquan Holmes of American International College is gaining steam to be almost guaranteed to be selected in the draft. He is an under the radar corner we wrote about previously. Holmes is a small school prospect that shows explosive ball skills and return ability. He really had a great pro day and it got teams like the Buccaneers, Patriots and Giants interested.

What are your thoughts Rams fans? Sound off below!