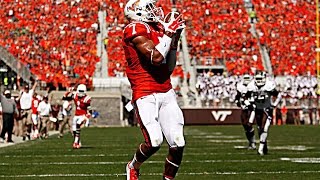 Bucky Hodges is a former 6’7″ quarterback that was converted to a wide-receiver. Last season he converted primarily as a hybrid tight-end where he looks to be drafted this April.

Ability to rise up and over the top of most defenders at the high point.

Can’t be intimidated run routes across the middle the field.

Played all receiver positions and can play the slot and outside receiver on the next level.

Will out leap everyone and be a extreme mismatch in the red zone.

Tracks the ball exceptional and has speed to get the slightly overthrown balls.

Simple mismatch for linebackers has to be covered by defensive backs.

Can identify coverage’s before starting his routes from his experience as a past quarterback.

Ability and strength to out muscle defensive back with run blocking.

Never lined-up as a traditional tight end at scrimmage as a down blocker.

Routes can be sabotaged by a physical defender in a press coverage do to his long stride.

Defaults to attempting to run through defender rather than effectively adjusting routes.

Has struggled to difficult passes not on target..

Tends to use his body to corral catches instead of hands.

Extremely athletic but need to be able to react quicker after catching the ball for extra yardage.

The Rams has truly been without a true red-zone threat receiver in a long time. Hodges with his height, frame, body, length, and football intelligence, can give quarterback Jared Goff a huge target. His flexibility as an tight end to be able to lineup as a receiver will be great for mismatch all over the field. Don’t be surprised if the Rams select Hodges earlier than anticipated in the draft. 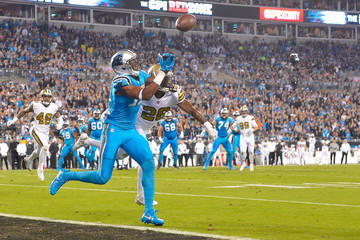