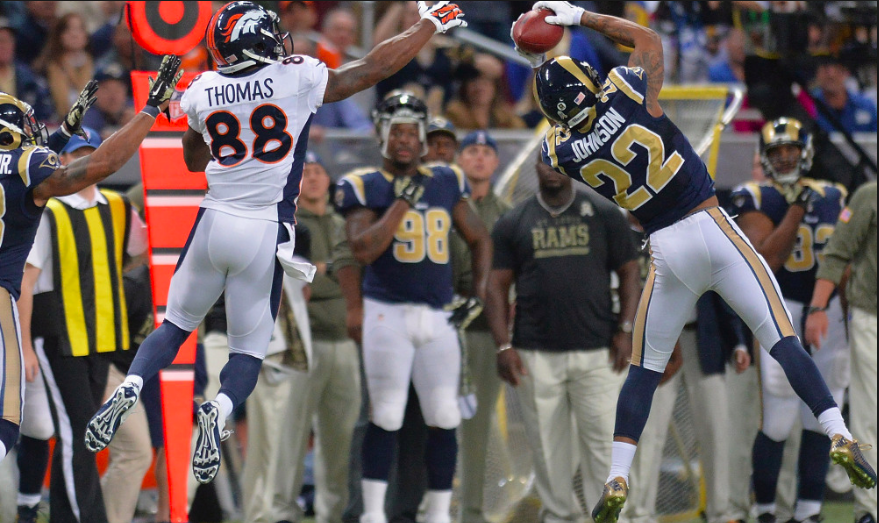 In this three-piece story, I’ll focus on what I think the Rams should do in each part of their offseason schedule: Retaining their own, adding from the outside, and obviously, the 2017 NFL Draft.

The LA Rams lost two essential players from their defensive core last year to the FA, both in the secondary, both equally important. Janoris Jenkins and Rodney McLeod. What it was thought to be a sign one tag one kind of day (or “migos deal” in the players words) turned out awfully for the team, as they slimmed down their secondary and lost 2 really good players and left more questions than answers. They where able to retain Trumaine Johnson via franchise tag (which was a good deal for both) but failed to extend him before the season ended which brought them to another crucial point.

Let’s analyze player by player, pros and cons, to see what is best for the team and their all around new scheme.

Trumaine Johnson (CB): We already talked a bit about him, so why not start here. Tru was the “winner” last year as he was tagged. This season, however, he failed to show what he did in his contract year and gave us thoughts on why the team should’ve tagged Mr. Rabbit instead.

As PFF noted this offseason in their “Top 50 Free Agents” article, Johnson should be looked more like a solid No.2 more than a No.1 CB right now as he has allowed around 60% of the passes thrown his way to be completed.

“…Over the past two seasons, Johnson has surrendered an average of 591 receiving yards and 2.5 touchdowns while allowing receivers to catch over 60 percent of passes thrown into his coverage.”

Tru is expected to get a deal in the $14-$16 million range, and while he is good and his departure would leave a huge gap at the CB position, the Rams front office should sit down with coach Phillips and address 2 major questions. Is he the right fit for this defense? Is he worth those $14 million, or should they target 2 CB’s in this loaded class for the price of one?

My verdict, based on last year alone would be to let him go; his play last season took a major hit as he only recorded 1 interception (7 in 2015) 11 less tackles and 6 less passes defended.

Prediction.- I think the new staff can not afford to create another hole in the team, as there are other positions that they need to address with more urgency, and without a first round pick, they need to spend those picks in the draft wisely. They will tag Tru for 2nd consecutive year and let him earn his new contract impressing coach Phillips through 2017.

Prediction.- With the team having to invest elsewhere and using their draft picks right, they’ll keep “The Leg” for the foreseeable future. 3 year extension.

Dominique Easley (DT): Last year, a surprise addition, a former 1st round pick from the same draft AD came from, signing a 1-year prove it deal. Coming from the bench, Dom had a great year recording career highs in tackles (35), sacks (3.5), forced fumbles (2) and stuffs (4).

Prediction.- DC Wade Phillips loves his lineman and he rather cut lose an aging veteran as Sims or Hayes to make room for Easley’s contract, than lose the Florida product.

Chase Reynolds (RB/ST): A stellar Special Teams player, Reynolds have contributed well under coach Fassel. And with coach Bones staying with the new regime, he should be able to retain his ST ace with a team friendly low salary. Other than special team, Reynolds hold no value.

T.J. McDonald (S): Another year, another safety that goes without an extension prior to the free agency. McDonald played well last year trying to earn his new contract, but off field red flags are a concern for the new regime (Non-alcohol DUI arrest) and with a new scheme, either Barron, a FA or a rookie could fill in nicely alongside riser Mo Alexander.

Prediction.- The Rams might let go the USC product as they’ll need to use that money on the other side of the ball to improve an offense which the new coach will try to print his trade mark.

Kenny Britt (WR): The first Ram since Torry Holt in 2007 that breaks the 1,000 yard mark. What makes that even more impressive is that he did it with the worst offense possible, as they ranked bottom in scoring, yards per play and first downs, while being second to worst in passing yards. Britt had his best year in his career and he will get rewarded; per Spotrac, he is pegged to to sign a 3 year $20 million deal, that would be a bargain if we look at what the top FA’s will ask (DJax, Garçon, Jeffery). If that’s the case, McVay & Co. should get their hands wet and sign the lone bright spot of that offense that could be in for greater things.

Prediction.- Desean and Garçon will rise the market value, and Britt will sign a 4 year $32 million contract, given his still young age (27) that still a solid deal for some, but not for the Rams that would love to have a true number 1 on the outside.

Brian Quick (WR): Pretty self explanatory, the 2012 Appalachian State product failed to show what his combine numbers did and the reason he was drafted before Alshon Jeffery (crazy right?).
Prediction.- Quick will be let go, not even for a penny would I hold him back.

Benny Cunningham (RB): He has been a solid No.2 for most of his career being behind guys like Tre Mason, Zac Stacy and Darryl Richardson. Never given a chance to be the featured Running back given his UDFA status but always fighting. Cunningham stats have fallen year after year, and with Gurley in the house, that won’t change. Benny is not near the top of RB free agency but he might be solid for the right team and surprise us all.

Prediction.- With Gurley being the building stone for the future, Benny doesn’t have much room for himself other than role player (even coming after a year where he was more effective than TGII). He will be close to a $4 million per year contract, and with Rams depth at the position, we could say farewell to Benny.

Case Keenum (QB): We all know Case, and as much a hard working QB he might be he isn’t just worth any type of money. Case was retained by the team in 2016 via RFA tender locking him up unless someone would be up to giving their 2017 first rounder (yeah right). If he would’ve stayed a free agent last year, maybe a team as the Broncos with almost all the pieces in might have taken a chance on him.

Prediction.- After a dreadful season, Keenum will be relegated to back-up duties on other franchise. (Maybe not too far away).

Other players worth noting:

Ethan Westbrooks (DE): The past regime pearl would have to come cheap to stay, even after appearing in all 16 games last season, would be a nice signing.

Cam Thomas (DT): Good rotational player, wrong side of the 30’s, if he comes at a good price, he might find a spot.

Matt Longacre & Louis Trinca-Passat (DE/DT): Both came low in the rotation and made no difference, their agents will help them search for a new home elsewhere.

I’ll see you this week with the 2nd part of the story, covering possible cap casualties and who should the Rams target in free agency.