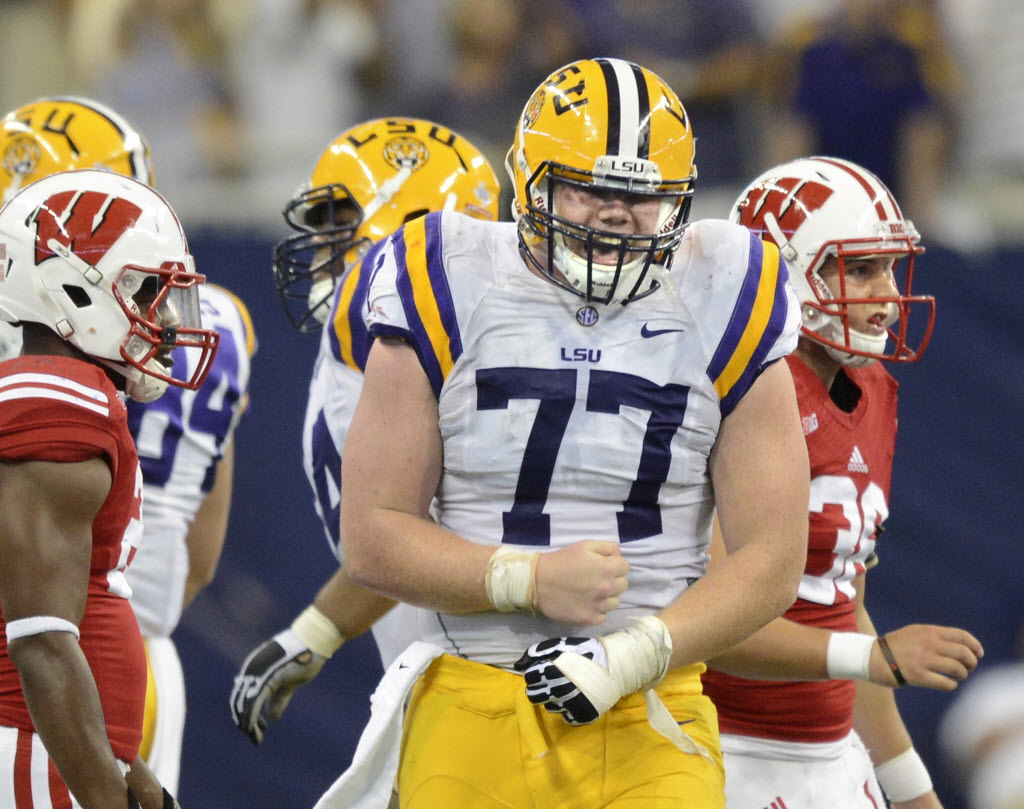 The NFL combine and NFL free agency appears to be right around the corner. Since my last mock for the Rams was at the end of January and I have since watched more tape, looked over more free agents and have beginning to start having new thoughts. . .I felt it was best to put out another Mock draft pre-combine. 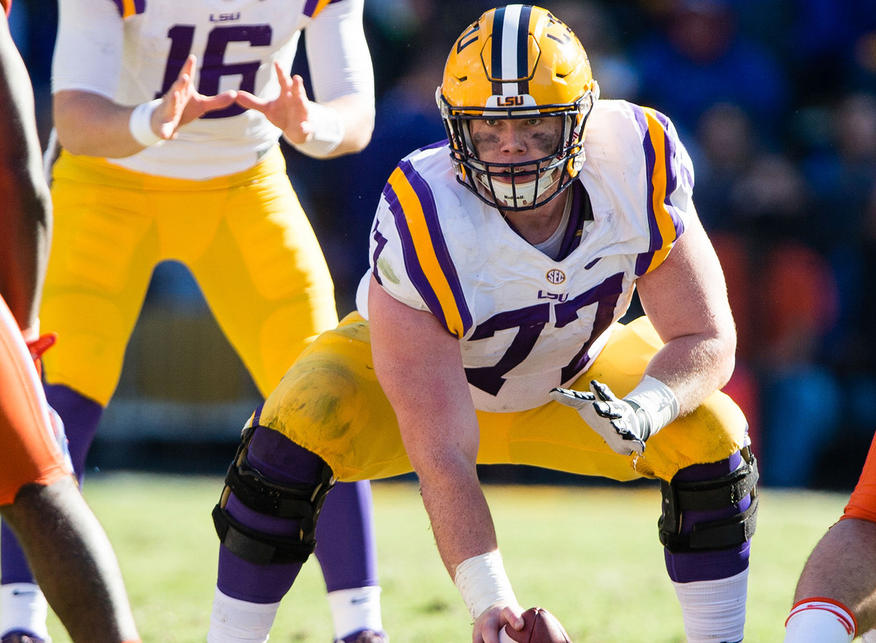 Here is a brand new face in my mock draft circle. Ethan Pocic is going to be a dynamic player. One thing you can see on tape is that he is a little bit more lean than a typical center, but he is going to be a force in the NFL. Pocic has it all, being a good athlete, with great technique, experience, leadership and I mean the list just goes on really.

The Rams no doubt have a giant gaping hole in the middle of their offensive line and whether you want to admit it or not Barnes has been terrible on the line. Until the Rams have a center they will not notice much of a difference on the offensive line. Pocic has the ability like former Ram pick Barrett Jones to play all over the line. However, Jones wasn’t built the way Pocic is. Pocic is a day one starter and the question is how much weight can he put on to take more powerful interior defensive lineman, but still remain as agile and quick enough to get to the second level? Pocic is likely to fall to the top of the second round because he is a center and the Rams will need to pull the trigger if he’s there. 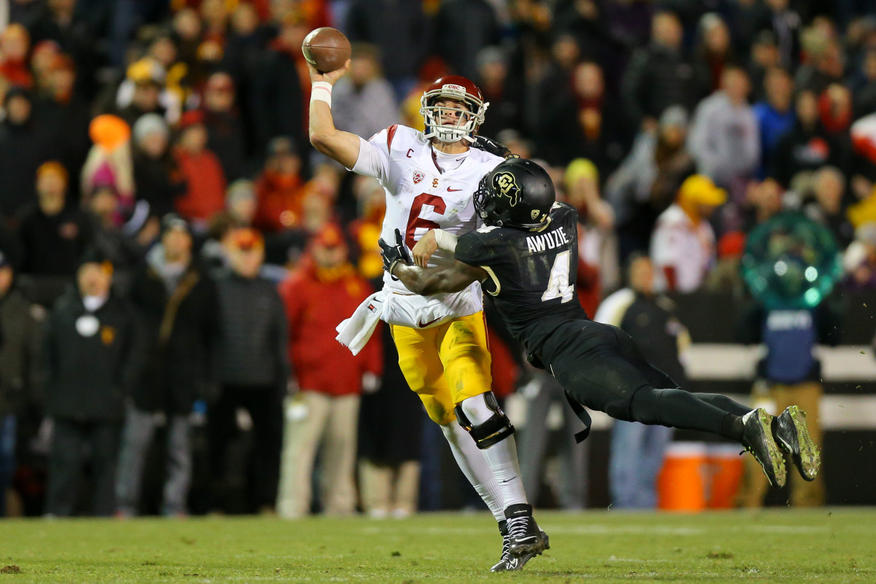 I stick by the fact the Rams should be targeting this guy. Chidobe Awuzie has been my biggest draft crush at the cornerback position since November. He is an absolute torment behind the line of scrimmage. He can make multiple plays at the next level as far as in coverage is concerned. However, the big thing I see with Awuzie is his ability to tackle in space and create disruption in the backfield. He had more than 10 tackles for a loss, as a cornerback that’s just insane.

The Rams obviously need a cornerback and Awuzie is another guy who could step in right away and start. This would also be considered a huge steal for me because quite honestly I think he’s a first-round talent. He may not be as flashy as the rest but if you really watch and break down tape there isn’t much that anyone can do that Awuzie can’t. This selection is likely penciled in for me until the draft. I am sold on Awuzie and all the combine can do is make it less likely he falls into the third round. 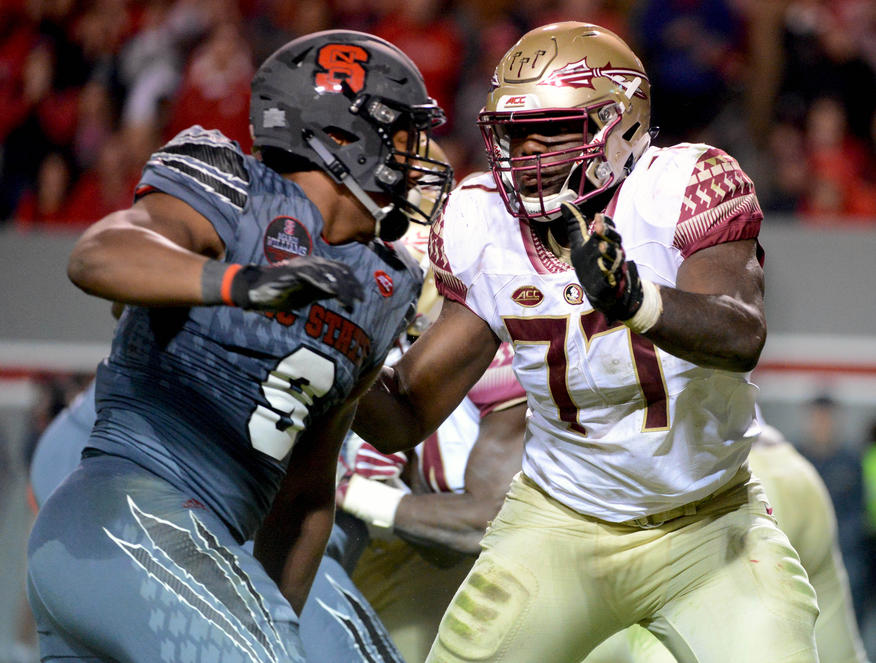 I really am starting to like Roderick Johnson as the future left tackle of the Los Angeles Rams. Hear me out, Johnson is going to have his up’s and down’s but I believe with Aaron Kromer now as the OL coach he can turn into a real good left tackle. He reminds me a lot of Morgan Moses who happened to be Sean McVay’s right tackle in Washington. Johnson excels in run blocking, he does struggle in pass protection but he flashes the ability to be dominant if given the help and taught the right technique. Johnson looks the part of an NFL left tackle and he could become just that with a little help.

The Rams obviously are in a bind with the future so cloudy at LT, Kromer might want his own guy to work with in that spot. I originally was going to place Julie’n Davenport here but the fact is that while they both are somewhat of a project, Johnson has more to work with right away than Davenport.

Another player I am sticking by is Fish Smithson from Kansas. I love his game, I love that he is an excellent tackler, with high football IQ and some serious ball skills. I feel as though it is imperative for the Rams to find their free safety and move Mo Alexander over to strong safety. Smithson would allow the Rams to do just that, the level of competition wasn’t a problem and Smithson should be considered a hidden gem in this draft. Drafting Smithson would be like getting back Rodney McLeod, but overall a better tackler and better cover guy than McLeod. 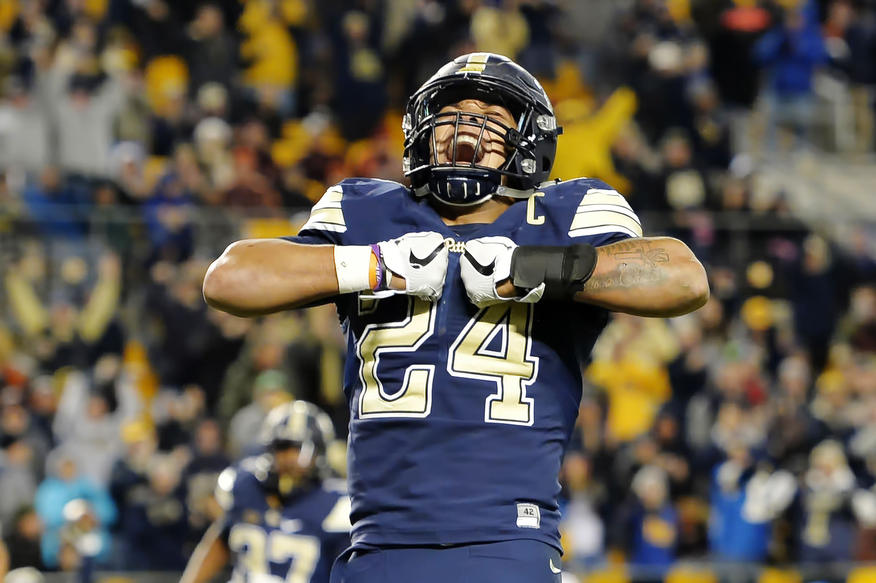 I absolutely love James Conner. He’s a freight train and has some seriously deceptive speed and burst that will make defenses think twice. The Rams are likely to lose Benny Cunningham in free agency, but even if they don’t one of the biggest problems last year for the Rams was the inability to score in the red zone and even more eye-opening their ability to punch it in at the goal line. Todd Gurley had a rough time doing that and call me crazy all you want, but I think the Rams should look for Conner as the Rams 2017 goal line back.

Conner for many who don’t know or didn’t read my piece on (which you can find here) overcame the battle of cancer and a broken leg. He did all that and then some by breaking the all-time touchdown record in ACC history. Conner on top of all that was widely respected among his teammates and was even named captain. Many think the Rams should take Joe Mixon, but I will take the guy who is a much better person and who has a chance to be a hell of a player and story on top of it. Give me Gurley, Conner, Brown and Green and I like the Rams backfield a lot. 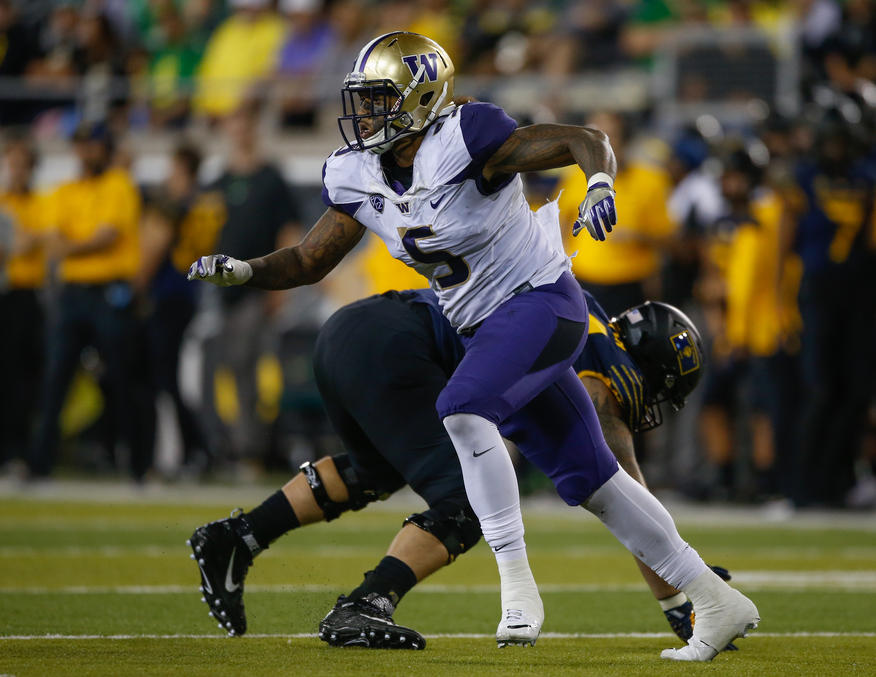 Another player I have my eyes set on for the Rams, Joe Mathis. I wrote about him here, if you didn’t get a chance to check him out. He’s one of my top EDGE rushers in this class. Why is he falling down to the sixth-round then you might be wondering? Well, Mathis unfortunately had this past season cut short due to a leg injury. Before his injury Washington’s defense was generating an ungodly amount of pressures. Once Mathis was on the shelf that all changed.

The Rams recently switched to a 3-4 base defense with Wade Phillips taking over at the helm. Mathis would fit in right away (if healthy) as an OLB with Rober Quinn. The Rams may not realize it but with the switch to the 3-4 they will need a couple new faces to establish the defensive scheme change. Mathis is one of those players you will love if he ends up on your time but hate if he doesn’t. Let’s just hope the Rams go with this terrorizing menace, because you could find him on a rival squad for the next 10 years. 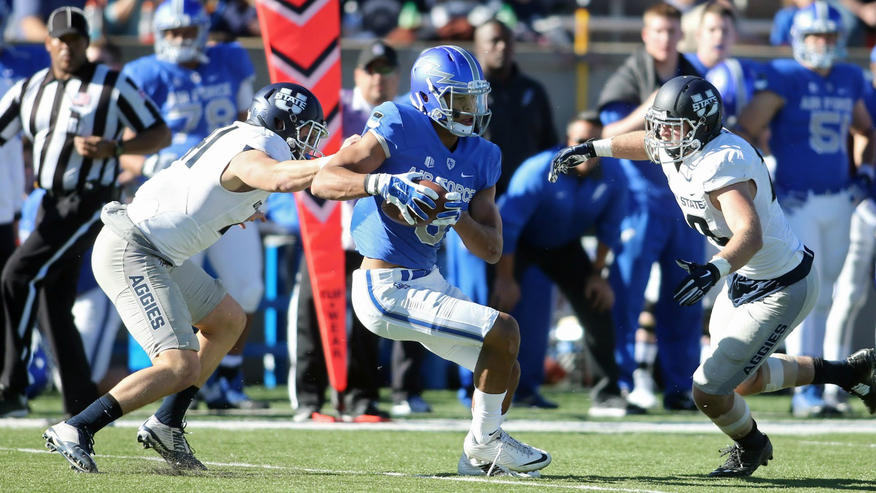 Here is a small-school prospect that made me take one look at his tape and think that there isn’t really a need for an early-round WR. The Rams are likely going to sign Pierre Garcon and maybe Robert Woods this free agency, there isn’t really a need with Tavon Austin, Pharoh Cooper, Paul McRoberts, Mike Thomas, Bradley Marquez and Nelson Spruce all being young WR’s that need to just be developed. That’s why I think Jalen Robinette is different and worth the pick here. Sure, he isn’t the greatest route runner, doesn’t have the blazing speed but Robinette has traits that could make him a premier WR at the next level. I honestly see the Patriots being all over this under-the-radar type of guy.

Robinette was mostly in a run-heavy offense at Air Force, because of this he is under-the-radar. He has size that makes NFL scouts salivate and uses that size well. He has extremely long arms and gigantic hands. This guy doesn’t care who hits him, he will get right back up or better yet try to bounce off of the defender and fight for every yard. Basically Robinette is extremely raw and could use a year to learn NFL route trees, but in the sixth-round this is an obvious pick to make. By prioritizing a raw WR late in the draft, the Rams could go ahead and find their best players available and fill needs in the mid-portion of the draft. Remember this name, there is a chance he blows up the combine and flies up mine and everyone else’s draft board. 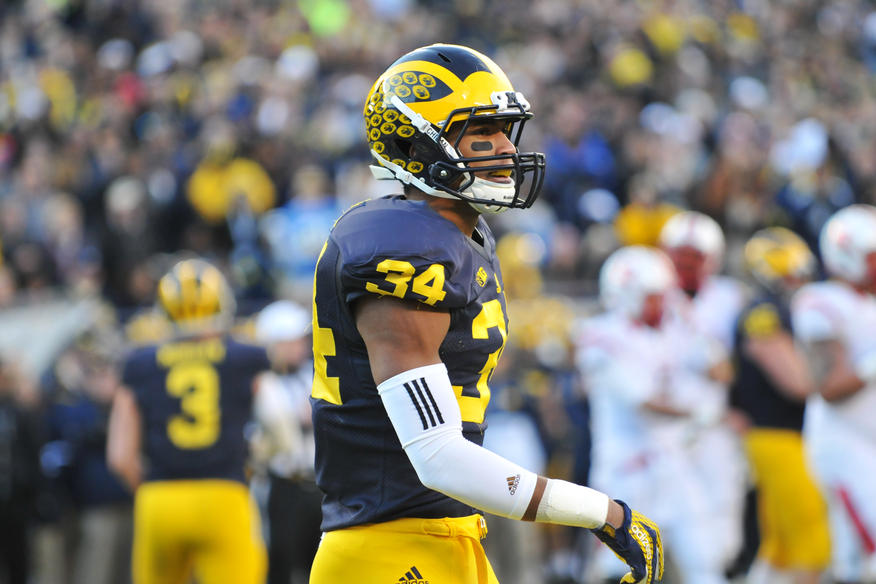 Cornerback is a big question mark in Los Angeles, while I already have the Rams addressing that need with Chidobe Awuzie. I still think grabbing a project CB couldn’t hurt. Jeremy Clark was well coached at Michigan and unfortunately it didn’t end up finishing the way he wanted it to. Clark tore his ACL in his final year and the NCAA denied his application for a sixth year of eligibility. Clark is a giant at 6-foot-4 which is an intriguing size for a CB.

There are many places the Rams can go to use their seventh-round pick, but Clark could be the best option with his five years of college, his age and his size. I see Clark as a Tharold Simon or Deshawn Shead type of CB. He just needs to be coached up but the freakish size and athleticism is there.