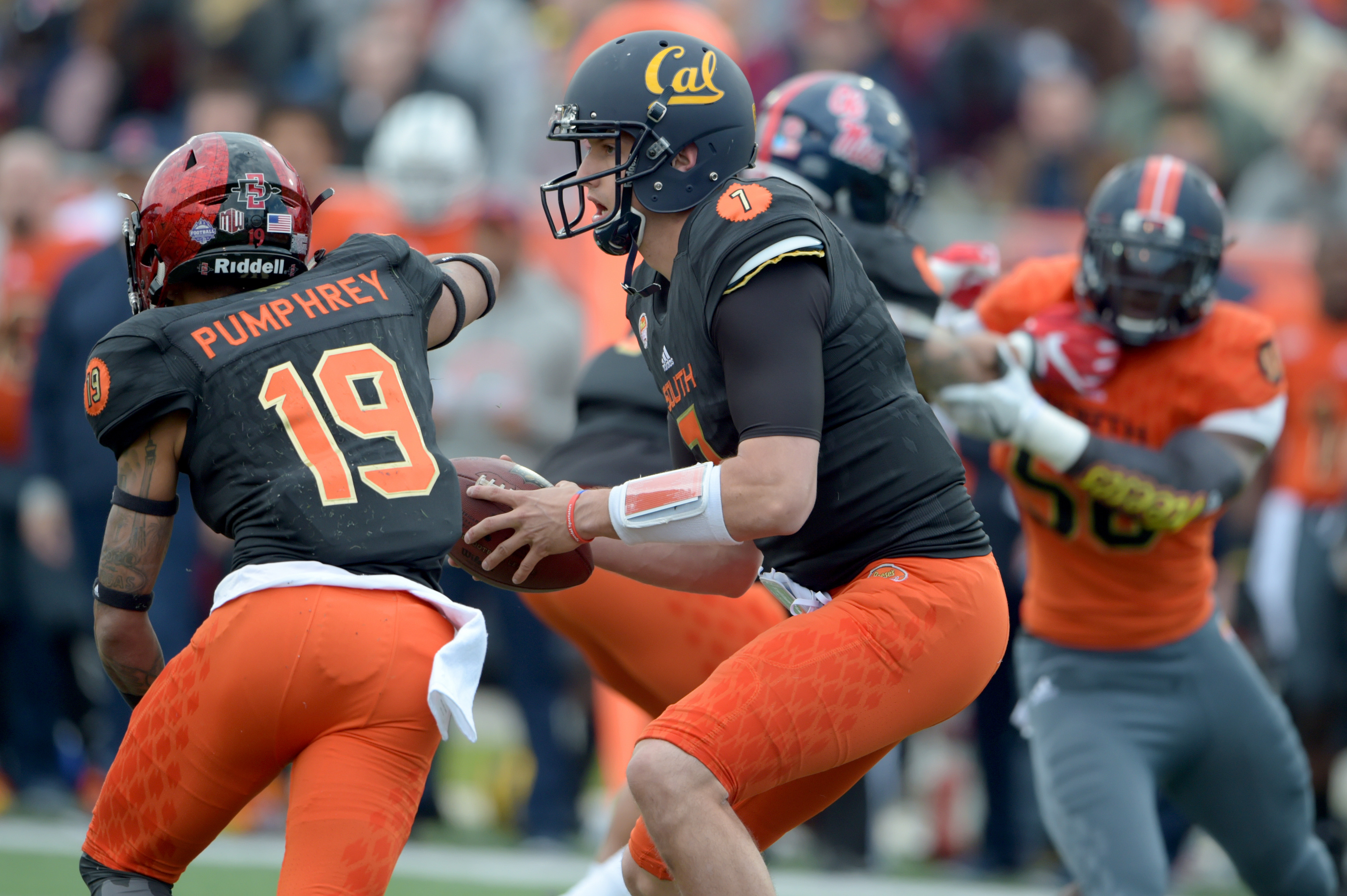 As the draft process continues moving along, it’s important to know who the Rams have met with as a reminder of who they may target. Here is the full list of all 29 prospects that have met with the Rams (that we know of) during either the Senior Bowl in Mobile, Alabama or the East-West Shrine Game.

[6-foot-5 , 230 pounds] Davis Webb, QB, California (Senior Bowl) – Webb (picture above) was the heir to Goff in California and a former Texas Tech transfer. He had a good season and followed up all that winning the Senior Bowl MVP.

[6-foot-5 , 225 pounds] West Lunt, QB, Illinois (Shrine Game) – Lunt was also a fellow Big 12 transfer just like Webb, he left Oklahoma State. He had a dreadful start with the Cowboys, but turned it around in Illinois.

[6-foot-2 , 220 pounds] Jamaal Williams, RB, BYU (Senior Bowl) – Williams is a bruising power back that is likely to go in the middle of the draft. He has the potential to be a draft gem.

[6-foot-1 , 200 pounds] Austin Carr, WR, Northwestern (Shrine Game) – One of the Biletnikoff Award finalists was a walk-on at Northwestern, he led every receiving category in the Big 10. This kid likely has a future in the NFL.

[6-foot-4 , 190 pounds] Jamari Staples, WR, Louisville (Senior Bowl) – Staples is a former 2-star recruit that comes from a disbanded program at UAB. He shows off elite height and crazy vertical with an excellent blend of elite speed and quickness.

[6-foot-4 , 240 pounds] Gerald Everett, TE, South Alabama (Senior Bowl) – Perhaps the second best TE in this draft behind Alabama’s O.J. Howard, Everett has all the tools to be a top 5 TE in the NFL some day.

[6-foot-3 , 227 pounds] Evan Engram, TE, Ole Miss (Senior Bowl) – Engram would likely be the third TE in this draft and provides a lot of value if Everett and Howard are off the board.

[6-foot-7 , 315 pounds] Julie’n Davenport, OT, Bucknell (Senior Bowl) – The true meaning of a project pick. Davenport, if developed correctly could be a nasty left tackle, but are you willing to wait as long as it takes to develop him?

[6-foot-5 , 320 pounds] Dion Dawkins, OT, Temple (Senior Bowl) – Dawkins has athleticism and build to be a tackle, but during the Senior Bowl he seemed to excel at guard.

[6-foot-7 , 313 pounds] Will Holden, OT, Vanderbilt (Shrine Game) – He received some great reviews from his week at the Shrine game practices and which squeaked him into the Senior Bowl. Possible late riser candidate, but likely just a next level RT.

[6-foot-4 , 300 pounds] Forrest Lamp, OT, Western Kentucky (Senior Bowl) – He was one of the best left tackles in college football and held his own against Alabama. He has potential to be an elite guard at the next level, but I still believe he can play tackle too.

[6-foot-5 , 310 pounds] Erik Magnuson, OT, Michigan (Shrine Game) – The former tight end ended up finding a home at right tackle for the Wolverines. He could be another late riser, but he does have some pretty bad technique he needs to fix.

[6-foot-5 , 328 pounds] Taylor Moton, OT, Western Michigan (Senior Bowl) – Moton was one of the biggest reasons for Western Michigan’s historic season. Moton followed that up with excellent play in the Senior Bowl. He is another versatile offensive lineman that can play either guard or tackle.

[6-foot-6 , 305 pounds] Sam Tevi, OT, Utah (Shrine Game) – He may be buried by fellow OT teammate Garett Bolles, but there is potential with this kid. He has mean streak and can be relentless. Will need to work on a lot having to do with technique, but if coached up watch out!

[6-foot-4 , 306 pounds] Jessamen Dunker, G, Tennessee State (Senior Bowl) – Outstanding athlete, but like Davenport this kid is raw. He needs to get stronger and of course there is a reason a man with this talent was playing at Tennessee State. He transferred from Florida after his arrest for theft of a motor scooter.

[6-foot-6 , 315 pounds] Geoff Gray, G, Manitoba (Shrine Game) – This Canadian guard made a huge block to practically win the game for his team in the Shrine Game. Gray will be an interesting value pick in the later rounds.

[6-foot-5 , 310 pounds] Kyle Fuller, C, Baylor (Senior Bowl) – Consistent, versatile and reliable are the traits often used to describe this Baylor center. Fuller has legit upside and could be as high as a fourth-round pick.

[6-foot-3, 295 pounds] Tobijah Hughley, C, Lousiville (Shrine Game) – Hughley is more of the unknown and under the radar prospect. He’s rated the ninth center per NFLDraftScout.com.

[6-foot-4 , 313 pounds] Chase Roullier, C, Wyoming (Shrine Game) – Pro Football Focus listed him as one of the best players of college football in the trenches. He is going to be dominant in a heavy run blocking scheme.

[6-foot-4 , 325 pounds] Glen Antoine, NT, Idaho (Senior Bowl) – Antoine said he met with the Rams in an article by Russell Brown of Fansided. I previously wrote about Glen Antoine here. He’s a true nose tackle who works relentlessly, he dissects plays in real time and uses his size to not only take on double teams, but completely clog gaps in the process. Antoine is a player to watch as we move closer to the draft.

[6-foot-3, 301 pounds] Joey Ivie, DL, Florida (Shrine Game) – Injuries have held Ivie back, but he clearly has enough of talent to stick at the NFL level. He translates best to a 3-4 DE or 4-3 DT. He also flashes some pass rushing ability that could help him become a complete player down the road.

[6-foot-5 , 255 pounds] Derek Rivers, EDGE, Youngstown State (Senior Bowl) – He’s rising up draft boards after an impressive Senior Bowl, but the question is why was he at the bottom of boards to begin with? Rivers possesses an excellent first step and shows the explosive get off and the ability to contort and bend his body to sneak by offensive linemen. It will be fun to see how his combine goes.

[6-foot-3 , 243 pounds] Vince Biegel, OLB, Wisconsin (Senior Bowl) – One of the leaders of the Badgers defense who is likely to be one of the best special teams players at the next level. He will struggle to fit as a pass rusher if he doesn’t bulk up.

[6-foot-1 , 220 pounds] Kenneth Olugbode, ILB, Colorado (Shrine Game) – Another leader, but Olugbode played in the middle of a stout defense in Colorado that led them to the Pac-12 title game. Olugbode embraced his role and racked up 264 tackles for the Buffaloes.

[5-foot-11 , 186 pounds] Cameron Sutton, CB, Tennessee (Senior Game) – Sutton is going to thrive in the NFL. Teams in college just flat out stopped throwing anywhere near him. He excels in man-to-man coverage and is fluid in the hips as well as the quickness he possesses to come back and make a play on the ball.

[6-foot-0 , 200 pounds] Brad Watson, CB, Wake Forest (Shrine Game) – He has ideal size for a corner in the NFL. He’s a sound tackler and has the ability to swat passes down. His junior year he was a lock-down guy, but in his senior year he stopped getting challenged as much. Could be a late round gem as he isn’t getting much attention at all.

[6-foot-2 , 205 pounds] Orion Stewart, SS, Baylor (Shrine Game) – One thing that jumps off the page with Stewart is his size at 6-foot-2. He’s got very good ball skills and is impressive the way he backpedals and breaks towards the ball carrier.

[6-foot-2 , 199 pounds] Dymonte Thomas, SS, Michigan (Shrine Game) – Thomas has the height, he needs to improve his ball skills. He has come a long way, originally a backup; worked his way up to start this past season.

Obviously, just because a player is on this list doesn’t guarantee them being selected by the Rams, but it’s a good indication of where they are looking and allocating their time. For many of you who wanted the Rams to look at offensive line in the draft . . . this should give you a good indication that offensive line will be addressed. It should be an interesting off-season so keep it right here for all the draft news and analysis for the Rams.